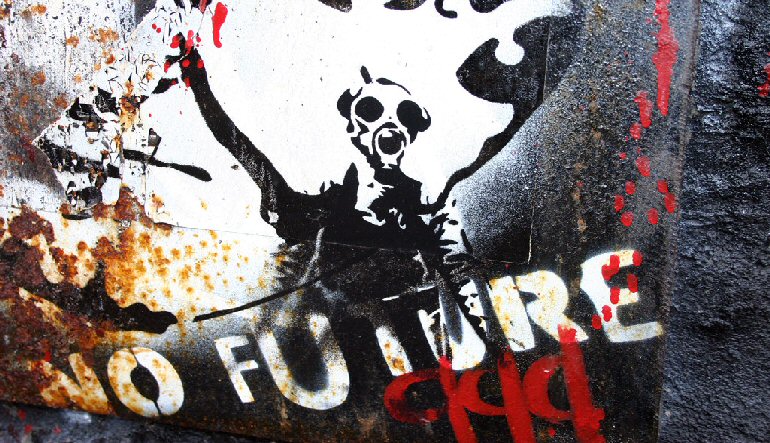 Science fiction has never felt more prescient or relevant. Classics such as George Orwell’s 1984 with its now-ubiquitous “Big Brother,” Ray Bradbury’s censorship critique Fahrenheit 451, and Margaret Atwood’s terrifyingly gender-regressive Handmaid’s Tale depict societies strangled by the evil clutches of the government and the populace’s inability to identify and challenge their own manipulation. Such stories gain new resonance now, as do many lesser-known works of science fiction—even tales about aliens, utopias, and rebirth contain warnings and advice that readers (and non-readers) would do well to heed in the coming years.

Ursula Le Guin—perhaps the most decorated female sci-fi writer of all time, having won multiple Hugo, Nebula, Locus, and World Fantasy awards and one of five women designated as a science fiction “Grand Master”—challenges a variety of assumptions in her work, particularly around gender. Her 1973 short story “The Ones Who Walked Away From Omelas” stands out as particularly germane. The story begins with descriptions of a seemingly utopian society, but readers can intuit darkness beneath the surface. Le Guin delivers a surprise in its form—a child living in a windowless, locked basement room: “It could be a boy or a girl. It looks about six, but actually is nearly ten. It is feeble-minded. Perhaps it was born defective, or perhaps it has become imbecile through fear, malnutrition, and neglect.” The child exists for the good of the town—channeling all horrors into one person spares everyone else. The entire town knows, but if people were to help the child, then “all the prosperity and beauty and delight of Omelas would wither and be destroyed.” The people rationalize that even if rescued, the child wouldn’t be happy or well, so they have no choice but to accept the situation: “They know that they, like the child, are not free.”

In a year in which we’ve seen children victimized by war, Le Guin’s parable of privilege strikes a particular chord. We know that more than one child suffers in Syria (and elsewhere), yet most people move through the same cycle as the people of Omelas: shock, indignation, and eventual acceptance. What can we do? We think to ourselves after we see the photos and read the stories. And then: At least it’s not me or someone I know. Le Guin nails the definition of privilege—letting someone else suffer so we don’t have to, and she captures the human instinct to let it be because giving up that privilege is unthinkable.

Despite taking place on a space station, James Tiptree, Jr.’s “And I Awoke And Found Me Here on the Cold Hill’s Side” also reflects on today’s society. A news reporter arrives to Big Junction to produce a story about “What [the space station] meant to the people back home who were paying for it all.” He interviews a male human who warns him to go home and then begins a “‘message for the eager, hopeful human race. A word about those lovely, lovable aliens we all love so much.’” The man tells the reporter about a woman in a bar who left him to flirt with a couple aliens. “That appalling alien arrogance,” he says of the two Sirians who wooed her away. The man resents losing a human female to the aliens as though she was his to begin with, and he’s offended she even finds them attractive.

The man’s anger toward the aliens and the girl is a projection of his self-loathing—in spite of himself, the man is attracted to aliens too. He describes his “personal introduction to hell” as an alien dancer’s performance:

The music built up, and her arms undulated toward me, letting the cloak fall apart little by little. She was naked under it…her whole body was smiling sexually, beckoning, winking, urging, pouting, speaking to me…Come do it to me, do it, do it here and here and here and now. You couldn’t see the rest of her, only a wicked flash of mouth. Every human male in the room was aching to ram himself into that incredible body. I mean, it was pain.

The man both hates and desires the alien dancer; he wants her not only because he’s attracted to her, but because she represents a conquest. His desire is rooted in disdain and dehumanization. He objectifies her and feels as though having sex with her would signify his superiority over her and her race. Misogyny has no planetary bounds, and Tiptree suggests that human women may as well be alien creatures.

The story’s message echoes even more loudly given that James Tiptree, Jr. was the pen name of Alice Bradley Sheldon, who began writing science fiction in the 1960s, when she was over 50 years old. She “had too many experiences in [her] life of being the first woman in some damned occupation,” and believed a male pen name would allow her publishing career to unfold more smoothly and with less fanfare. Fans figured out her true identity in the late 70s and the revelation caused controversy, as many readers believed Tiptree’s stories could not have been written by a woman.

Sci-fi also exposes humanity’s destructive cycles and explores what it might take to break them. Stephen Vincent Benét’s 1937 story “By the Waters of Babylon” takes place after a nuclear apocalypse. The new civilization refers to its technologically advanced ancestors as “gods” and the son of a priest ventures to the “Dead Place” where they once lived. He finds evidence of when “fire fell out of the sky” and “poison was still in the ground” and concludes that his ancestors “had been men, neither gods nor demons.” He also seems to piece together what happened to that generation and concludes that “Perhaps in the old days, they ate knowledge too fast.” The story provides hope that the new generation will learn from the mistakes of the old, just as we look at events such as the Holocaust and say, “never again.”

Although we vow not to repeat the mistakes of the past, we often do anyway. Benét foreshadows a destructive cycle when the priest’s son mentions the brewing conflict between the Forest People and his tribe, the Hill People: “We are not ignorant like the Forest People—our women spin wool on the wheel, our priests wear a white robe. We do not eat grubs from the trees.” These observations echo those of Columbus and his men when they encountered the Native Americans, whom they perceived to be primitive and ripe for conversion; Columbus believed he “could conquer the whole of them with fifty men, and govern them as [he] pleased.” The priest’s son regards his tribe as superior to the Forest People—his priests wear white robes while the Forest People eat dirty grubs. He calls the Forest People “ignorant,” which suggests that despite gaining knowledge about the “gods” and their demise, his current society could also end up in catastrophic conflict.

Not all hope is lost in these dystopian stories. Some characters are aware of the tendencies and flaws that threaten their futures. “By the Waters of Babylon” ends with the words “we must build again,” suggesting that perhaps the conflict between the Forest and the Hill People can be resolved without weaponry or warfare. At the end of “Those Who Walk Away From Omelas,” Le Guin describes how every now and again, those who cannot accept the plight of the child “walk straight out of the city of Omelas, through the beautiful gates…and they do not come back. The place they go towards is a place even less imaginable to most of us than the city of happiness…But they seem to know where they are going.” While perhaps a more optimistic ending would involve those people directly challenging or changing the system that punishes one child for the sins of everyone else, sometimes what’s broken cannot be fixed. Sometimes, people have to build something new.

Ultimately, these stories not only reflect the problems in society, but also provide a path forward, which involves self-awareness, compassion, and acceptance of the differences among people. The ends do not justify the means—the means matter. The means define humanity. And if the means are unacceptable, we must change them, or start again.