Home
»
Critical Essays
»
Science and Literature: Coming Together for the All-American Solar Eclipse 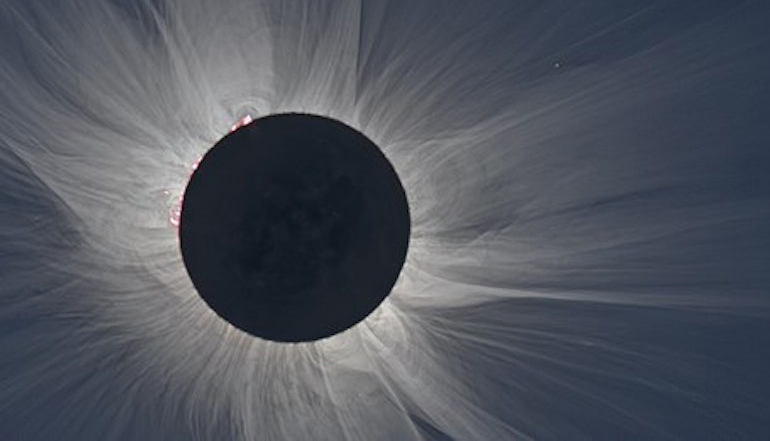 Ten minutes before totality—astronomer Anthony Aveni sets the stage for readers who have not seen a total solar eclipse—the light will be almost fifty thousand times brighter than a full moonlit sky. Still, effects will be noticeable, he says: “As the crescent slims, shadows in the landscape start to sharpen . . . buildings on the ground and the nose on your neighbor’s face become more stark, and that face takes on an ashen look, as if being viewed through sunglasses.” Attentive observers will notice the shadow of the moon approaching like a distant storm, until, two minutes before totality it will come at those on the ground as a “silent wall of blackness at screaming speed.”

His adjective is not hyperbole. “From all the hills came screams,” Annie Dillard testifies in her essay “Total Eclipse.” When the shadow slams into Nashville, the largest metropolitan city in the path of totality, on August 21, it will be traveling approximately 1,450 miles per hour. For comparison, Cole Williams, the most recent Speedway Champion at the Fairgrounds Speedway Nashville, can run the short track at 120 miles per hour. The speed of sound is 767 miles per hour. It is so fast Dillard calls it “stupefying,” saying, “You can feel the appalling, inhuman speed of your own blood.”

The “All-American Eclipse,” as some astronomers refer to the coming event, marks the first path in recorded history to pass exclusively across the continental US. After first touching Earth in the Pacific Ocean, it comes aground on the Oregon coast. The centerline of visibility then crosses the state and country at a diagonal swath approximately seventy miles wide, traversing Idaho, Wyoming, Nebraska, Kansas, Missouri, Illinois, Kentucky, Tennessee, North Carolina, Georgia, and South Carolina, before fading into the Atlantic. The whole event will take less than two hours. Everyone in the US will see at least a partial eclipse, but the difference between a partial and a total eclipse, according to Jay Pasachoff, the astronomer who holds the world record for most eclipses viewed, is like standing outside the opera house versus attending it.

“The mind—the culture—has two little tools,” Dillard explains in the same essay. These tools are “grammar and lexicon: a decorated sand bucket and a matching shovel.” We make sense of life, society, and natural phenomena by scooping morphemes into syntax and patting them into castles of meaning. Scientific and literary writers use different buckets, but at times they apply joint efforts to the same wonders. This August’s eclipse provides a prime opportunity for the discourses to complement one another.

The most obvious contribution is science’s ability to predict the eclipse’s path with mathematical precision, but the power of scientific observation only begins here. Scientists have also characterized a number of visual effects we can expect to see. The founder of solar physics, Francis Baily, was the first to recognize the phenomenon now known as Baily’s beads, which occurs just as the moon squeezes out the last light of the sun and beads of light spill a partial necklace overhead. Baily’s beads follow the diamond ring effect, which is when a ring of light remains of the sun along with the last brilliant piece of orb forming a fifty-carat diamond for it. Both events precede the grand finale when the corona becomes visible after the moon’s body covers the sun completely.

Some understanding of the science of eclipses also increases our sense of mystery that a total eclipse can happen at all. The sun is roughly four hundred times the diameter of the moon that blocks it, but it is also four hundred times farther away from Earth. Add to these calculations the elliptical orbits of the moon and the Earth, which change the distance from the sun and the moon’s relative size, and partial eclipses seem inevitable, as when more common annular eclipses make of the sun a ring of fire. Yet every 375 years or so, on average, for any particular city or house on Earth, the shadow forms a perfect fit.

Why is a mystery that neither discourse answers fully, but the effect is well met in poetry and prose. In “Sunset at Night—is natural—” Emily Dickinson writes in 1862:

Eclipses be—predicted—
And Science bows them in—
But do One face us suddenly—
Jehovah’s Watch—is wrong.

No matter how prepared we are for the sight, Dickinson and other writers claim that the effect supersedes reason. “It had been like dying,” Annie Dillard begins:

It had been like the death of someone, irrational, that sliding down the mountain pass and into the region of dread. It was like slipping into fever, or falling down that hole in sleep from which you wake yourself whimpering.

In “The Sun and the Fish,” Virginia Woolf describes England’s 1927 eclipse:

Pink faces went green, and it became colder than ever. This was the defeat of the sun . . . The shadow growing darker and darker over the moor was like the heeling over a boat, which, instead of righting itself at the critical moment, turns a little further and then a little further on its side; and suddenly capsizes.

Awe shatters sense. Scientists like Baily accommodate for that human limitation by organizing bands of people beforehand to focus their attention, so that each viewer is assigned a separate aspect of the phenomenon so as not to be distracted from its climax by the appearance of another. Poets and essayists turn to literary forms to process complex, multifaceted experiences and to gather their emotional significance. For it is only by being paired with emotion, Virginia Woolf writes, that an image becomes memorable.

Of the moments following an eclipse, as the world regains color, Woolf writes:

All the convalescences and respites of life seemed rolled into one. Yet, at first, so light and frail and strange the colour was, sprinkled rainbow-like in a hoop of colour, that it seemed as if the earth could never live decked out in such frail tints.

Her great relief is sharpened by a contrasting awareness of what would have been had the sun not reemerged. The fearful possibility has overtaken more than one mind and even life during a total eclipse, but if social media makes us less susceptible to being caught off guard by the sight, it still offers what Dillard calls “a wake up . . . from our sleeping lives,” which charges us with language to shape what sense we can of this “clockwork of loose spheres” with all available tools at hand.