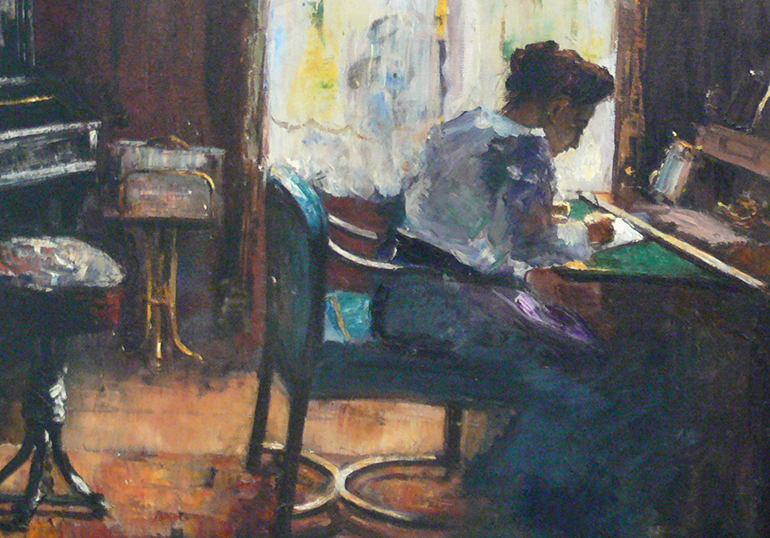 Meg Wolitzer’s The Wife is an exercise in self-deception. Early on, her protagonist, Joan Castleman, née Ames, tells the reader that she intends to leave her husband. Throughout the course of the novel, she unfurls strand after strand of their story and his ascent to greatness, as well as what we assume is the event that incited her departure: an affair with one of his students—which Joan herself was once. In truth, however, the story is not of how Joe Castleman the “great” writer seduced Joan the student and how their marriage fell apart after years of neglect and conflicts arising from their differences in age. It is a story of something far more compelling: a woman who has hidden her talent behind a man.

Joan, we intuit, never believes in her own writing. In 1956, a few years into her degree at Smith College, she feels she doesn’t know much of the world; when she “writes what she knows,” though, Joe loves the results. Still, she worries that no one will ever read her writing, that it will “languish untouched on the chilled shelf of a college library forever.” She also feels that she and all her classmates aren’t in the middle of anything important at school, instead “being kept separate from the world that mattered, the world of single-minded, odious men on Senate subcommittees with their big microphones and their slicked-back hair, and men in hotel rooms with their pressing needs.”

Joe and his interest in her work however, make her think for a moment that perhaps she has talent—until, that is, she attends a reading by the “talented lady writer” Elaine Mozell, whom Joan describes as “a once-good-looking woman who had gotten a little too heavy and shouldered too much resentment to attract many people anymore.” Elaine tells her that she wouldn’t be able to get the attention of all the men who decide “‘who gets put up on a pedestal for the rest of their lives. Who gets to be King Shit.’” Joan, telling herself that she doesn’t want to play the men’s game, that she wouldn’t be comfortable in it, that her world isn’t large enough for their interest, decides to bet her life on Joe.

When she reads the draft of his first novel, The Walnut—which tells the story of Joe’s failing first marriage and his affair with Joan—however, she ends up rewriting it—to save Joe, and herself. As she approaches the manuscript, she says she saw everything that needed to be rewritten “as though the bad passages had been highlighted by some overly helpful undergraduate.” She crosses out words and replaces them with ones that are obviously better as soon as they come to her, “until the page was simply one long black-out sheet.”

While Joe agrees after her operation that she would do this work for just this one novel, The Walnut ends up being such a success, and Joe becomes so happy, that it becomes their process. Joe comes up with ideas that Joan works with, producing a manuscript that Joe only touches to make copy edits. Joan claims this is fine: she doesn’t want to “struggle to become a woman writer in this world that had little regard for women.” So the operation carries on for years—until the Helsinki Prize.

By the time “Joe” receives the prestigious fictional award, he has become a “slack-belied novelist” who has no idea how to take care of himself. He has had a slew of dalliances, and carries himself among his friends with the delusional confidence that he is a great writer. Only when Joan reveals the years of deceptions to the reader, after we have sat through years of praise heaped on Joe and through the whole award ceremony, his medal “winking,” from Joan’s vantage point, as selections of “his” novels are read to the audience, that we see the truth of who was really behind the genius of the book. We see, too, that Joan’s best fiction is the deception she has been enacting publicly for most of her life, a deception that she has made look easy—the feat of a truly talented writer.

The morning after the ceremony, Joan had planned to see Nathan Bone, the clingy unofficial biographer who had followed her and Joe over the years in hopes of gathering enough material to write the definitive biography on Joe. In the middle of a fight at dawn, Joan goes beyond telling Joe that she’s leaving him: she tells him that she intends to reveal everything to Bone. She says she’ll do it because she doesn’t want to hate herself. “‘I’m a good writer, Joe, really good,’” she says. “‘You know what? I even won the Helsinki Prize!’” This is too much for Joe, and he has a heart attack, his second, and dies.

Joan becomes consumed with grief after losing him, though she remains without regret for what she said. On the plane ride home, Bone finds her and waits to see what she will tell him—as do we as readers—waiting to see if she will unmask herself. But Joan, in the end, decides not to. She doesn’t “want to make a gift” of the truth to Bone; and, she recognizes, her talent is still with her, even though Joe is not. She thinks, “maybe I could use it eventually. I could use parts of what I’d seen and done and had with him . . . and maybe even put . . . my name on it.” In this moment, Joan, taking a step against the patriarchal culture that has kept her away from herself for most of her life, stops deceiving herself.