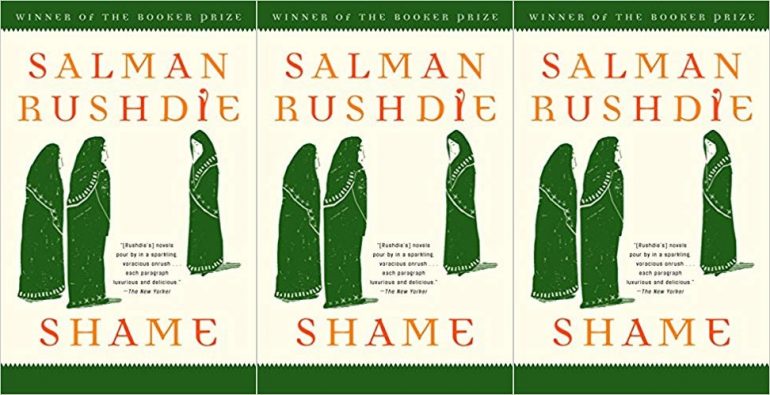 Shame, Salman Rushdie’s 1983 novel, is a marvelous living, breathing work of literature. Set in the nation of “Peccavistan,” the novel is a fictionalized narrative of modern South Asia that is littered with extravagant elements stretching the limits of reality: three sisters give birth to a son whose conception is seemingly immaculate; a daughter blushes when she is born; mothers are frightened of the Loo, the hot afternoon wind; and corpses survive the hangman’s noose. The physical spaces the characters occupy, too, mirror the chaotic and colorful nature of the characters. The city of Q resembles an ill-proportioned dumbbell; cities swell as time passes; and there are massive, impossibly old estates crammed with valuables. These characters and settings allow Rushdie to explore and illustrate the themes of shame, shamelessness, and violence.

The novel’s narrator speaks of the slippery relationship between shame and violence—when accumulated, the former often leads to the latter. Shame, which traces the histories of the Hyder and Harappa families as they fight for political power, can be read as a tussle between the parties who have schooled themselves not to feel the “debased emotion of shame” and those who are “shame incarnate,” who ingest the ignored shame of the other characters, bearing its immense burden until it is too much for them. In the text, residential spaces function as a breeding ground for this tenuous relationship between shame, shamelessness—which is often characterized by a willful ignorance of history—and violence.

Shame focuses in particular on Nishapur, a centuries-old mansion where the Shakil sisters live. Nishapur is claustrophobic and isolated, a dense manifestation of ignored memory, where its residents do not care to breach its secrets; Omar Khayyam, the Shakil sisters’ only son, longs to escape it in childhood. The novel opens on these sisters, Chunni, Munnee, and Bunny, ensconced in the mansion. They have been cloistered within it for their whole lives by their father; they cannot read or write and have never stepped outside; the women spend their time in the zenana (women’s wing), where they amuse themselves by inventing private languages and “swaying to the strains of the enigmatic dance music” emanating from a faraway hotel. The sisters’ father has died, and they have discovered that he has squandered away the family fortune; they are in debt, left with only the house, stuffed from top to bottom with forgotten treasures over the years.

Despite this revelation, the three host a ball with the “Angrez sahibs” (the British), where one of them gets pregnant. The sisters share the symptoms of pregnancy, with morning sickness and cravings affecting them identically; when the baby, Omar Khayyam Shakil, is born, the three raise him collectively as their child. By sharing the baby, the sisters turn the shame of conception out of wedlock into a collective triumph. They also come to instruct their son that shame is a debased emotion—and yet raise Omar Khayyam much like their father raised them. The boy does not leave the house for the first twelve years of his life.

Omar Khayyam envies his mothers for their closeness, for their extreme and isolating intimacy. Alone, he paces the house and stumbles upon long-forgotten artifacts. The most significant to his development is his discovery of the library, where he teaches himself classical Arabic and Persian in addition to Latin, French, and German. He also discovers several treatises on hypnotism, which he studies and practices on the household helpers. By hypnotizing the three men who worked in the house, he learns of their mutual caresses, making him feel more alone than ever. Nishapur stifles Omar Khayyam, becoming for him a source of agitation and claustrophobia. In the absence of human company, he is left to his own devices and wanders about the centuries-old house in search of something rich and exciting to make up for what he lacks. The ancient hopes, fears, and loves of his long-dead ancestors haunt him until it seems to him that he is a person apart, inverting his sense of physical order. Suffocated by this claustrophobia, he longs to leave the house.

In later years, it is evident that this isolation leaves him deficient in his interactions with other people. He seems to lack all normal understanding of decency, manners, and societal conventions. In a violent episode for which he is never punished, he hypnotizes the daughter of a border customs officer and rapes her, mirroring an earlier incident in which he had hypnotized an older woman who worked as a housekeeper at Nishapur, resulting in her death. People often say that Omar Khayyam does not know the meaning of shame. This aberrant nature can directly be tied back to his prolonged isolation in the fetid atmosphere of his maternal house.

When he becomes a doctor, Omar Khayyam is asked to treat Sufiya Zinobia, General Raza Hyder’s older daughter. Sufiya Zinobia, who displays symptoms of impaired growth, blushes easily. She is said to absorb the unspoken feelings around her. One afternoon, she has a fit where she murders the turkeys raised by her neighbor, causing a scandal. Soon after, she faints and pus-filled boils appear on her body. Omar Khayyam, a leading immunologist, is brought onto her case. He falls in love with her during his bedside vigil, and they are married. At this point, the narrator mentions that Omar Khayyam has strangled all memories of Nishapur. His childhood seems foggy, like a bad dream, almost as if it never happened. It is as if he were “homeless”; he is “no longer affected by what happens there, by its logic and demands.” The narrator explains that forgetting the place where he was instructed not to “feel the debased emotion of shame” further heightens the exposition of shamelessness in the novel. Denying the fact that Nishapur exists is also a denial of his assault of Farah Zoroaster; such denials also promote the one-sided perception of him as an able doctor.

Omar Khayyam is initially able to control Sufiya Zinobia after her fits, when she is possessed by something deep within her. The narrative positions these fits as the work of the Beast —the Beast personifying her accumulated shame, both awakened and shaped by it. She nearly beheads her brother-in-law at his wedding, after which Omar Khayyam treats her. But when her beloved ayah consummates her marriage with the doctor in her stead, which results in her becoming pregnant and then dismissed, this further goads the Beast into action. Local boys are found dismembered, the product of Sufiya Zinobia’s violence. The monstrosity may best be read as the tussle between remembrance, shame, and human relationships, and rage and violence. In the end, the Beast overpowers the girl and comes for her family.

To escape the Beast, Omar Khayyam and his in-laws, General Raza Hyder and his wife, Bilquis, escape to Nishapur. They encounter Omar Khayyam’s three mothers, who still swing in unison on their balcony. The house itself is still stuffed with precious artifacts; one of Omar Khayyam’s mothers instructs him to serve their guests from the thousand-piece set of china that had come from Tsarist Russia. The house, however, is shrinking. The mothers confess that rooms have vanished. Neither the study nor several staircases exist anymore. The shrinking suggests that the house is losing its complexity. From being a place that contains intimacy, love, and suppression, it is turned into a space of claustrophobia, loneliness, and violence. Such progression is highlighted when the Shakil sisters murder General Raza Hyder in the dumbwaiter of their house, slicing him open with knives. After the killing, the sisters vanish, leaving the doors of Nishapur open. The townspeople swarm the ancient space and destroy it.

In the closing scenes of the novel, the Beast appears, hypnotizing Omar Khayyam with her yellow eyes. Omar Khayyam feels that he can see his wife in the yellow eyes, submerged within the Beast, right before he is beheaded. His beheading indirectly results in an explosion, which demolishes Nishapur. Such destruction symbolizes the annihilation that results from the blatant shamelessness that arises when one remembers history only when it is convenient. It also argues that the burden of shame should be distributed equally, like all three sisters sharing the responsibility of mothering the boy.

In Shame, Nishapur is a source of suppression, where the opaqueness of memory oppresses Omar Khayyam. The house incubates his willfully ignorant character and is the victim of the devastating consequences of his denial. In a sense, the house mimics the tussle between memory and forgetfulness, and shame and shamelessness embodied by Sufiya Zinobia. It is a site of multiple dualities that only reveal themselves upon careful examination.