Home
»
Interviews
»
Shut Up and Breathe: An Interview With Marcus McCann 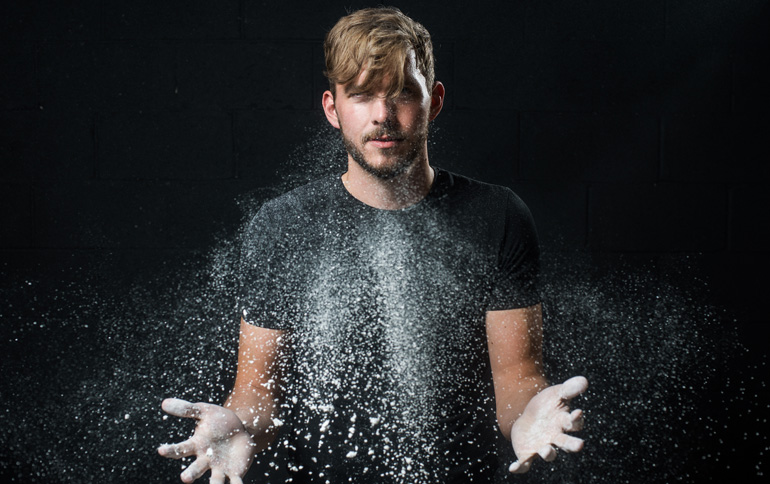 It has been a delight to see the development of poet Marcus McCann through what is now three published collections, including his latest, Shut Up Slow Down Let Go Breathe (Invisible Publishing, 2017). From his small handful of chapbooks through to his first two collections, Soft Where (Chaudiere Books, 2009) and The Hard Return (Insomniac Press, 2012), his work has become more confident, and more willing to experiment, managing an incredibly precise linguistic and lyric gymnastics. His work has been awarded the EJ Pratt Medal and John Newlove Award, and was shortlisted for the Gerald Lampert Award. Originally from Hamilton, Ontario, he spent his formative writing years in Ottawa before moving to Toronto, where he is a part-owner of Toronto’s Glad Day Bookshop.

rob mclennan: On your website recently, you mention that your third collection, Shut Up Slow Down Let Go Breathe, “was a weirdly intense five-year project.” How did this differ from putting together either of your first two collections?

Marcus McCann: Right. Writing and publishing were easier in my twenties, psychologically. You know? I was like the chicken cannon from Royal Canadian Air Farce. Stuff a bunch of junk in, watch it explode, admire the results.

I feel like I am more selective and more critical nowadays. I wonder, how much can you push a short, contemporary lyric to have meaning without it turning into a puddle of Jell-O? Can you write in that way, while still maintaining your commitment to beautiful language and metaphor?

RM: Has this been a trajectory of being more critical of what you’re working on, or did it come on more suddenly?

MM: Oh no, gradually. And you wouldn’t be able to tell from the book itself. The new book (Shut Up Slow Down Let Go Breathe) has a looser poetic line than earlier work. To outside ears, it probably reads as lazier, I don’t know. But it’s the result of a more self-critical mode.

That’s also why the book’s so thin. When I first pitched it to Invisible Publishing, I had already thrown out a lot of poems. And then I threw out another twenty. So it’s a skinny little thing.

I keep thinking about the internet, how it’s changing the way people read poems. I love a simple web page that has a single poem on it. Especially if it’s shared with me by someone I trust. That’s why I like what you’re doing with your Tuesday poems, for example: a single curated poem a week, a little invitation without a lot of investment. That’s why I like The Steel Chisel. That’s why I like newpoetry.ca.

For a standalone lyric, the internet seems like a better home for it than a book. But that’s just personal preference—a standalone lyric is my jam. And thinking about the kinds of poems that I like in that format has made me think a lot about what kinds of lyrics I like more generally, and it’s pushed my own writing.

RM: I find that shift interesting: I remember when Stephanie Bolster shifted to a looser poetic line as well, after the polish of her first two collections. What do you feel the looseness is allowing in your work that you hadn’t before?

MM: I had been doing this gumboot-in-a-washing-machine lyric for six or eight years, and I really like that sound in poetry—I will always love it. When I first started publishing, my goal was to maximize the density of certain hard sounds (P, B, K, T, D, G, especially). But it’s a lyric mode that suits certain subjects better than others: physical labor, big heavy things (a condo tower, exercise equipment), anonymous sex, rural and pastoral subjects, performative masculinity, awkward social interactions . . . It’s like, I could never write a poem about a placid lake in that voice. Here’s what I’m talking about, from DG Jones’s “Listening it Satoshi”:

Okay, so then now I want to write about something different. Say, a friend who loved his job, but is now disenchanted by it. That’s a complicated feeling. Is this “shit / idiot graffiti” sound the sound that suits that disappointment? I mean, it could be, in the right circumstances. But it didn’t feel right to me. So I wrote:

You watched your boss’s quirks

dry into burrs. She ground ambition out of you
like orange pigment out of a beetle.

The first line and a half has the gumboot quality: boss/quirks/dry/burrs. But then I let myself have a long looser line in the next bit, to signal that aspect of the feeling that is about exhaustion or giving up. Inhale, exhale. Once I started doing that, the range of subjects began to open up. I found humor creeping in. I mean, Susan Holbrook and Margaret Christakos can use humor in very tightly packed lines, but for me I needed the looseness to let in some funny bits. I found the emotional range opened up to more complex feelings, like longing, generosity, dread, resignation. Once that began to happen, as in, once the themes began to feel more complex, I tried to be attentive to meaning, which poets aren’t supposed to do when they’re young. It’s a terrifying thing to be attentive to.

RM: I know you’ve an interest in open-ended forms, but I’m curious as to your discussion of the single poem. How does your focus on the individual poem grow into something book-length?

MM: Well okay. My thinking on this has evolved a little bit. I have historically had a knee-jerk aversion to the “book-length project,” basically for all the reasons set out by Phil Hall in his “The Bad Sequence.” I’m prepared to admit I was wrong. I mean, other people do them well, and other people really enjoy reading them, but I’ve been a skeptic on both fronts, as poet and reader.

And I had this idea that, in contrast, there are books of standalone lyrics, each poem perfectly siloed and complete. What a tidy view of a poem, and of a book. As I was writing the poems that make up Shut Up Slow Down Let Go Breathe, that was my goal. Write a poem. Finish that poem. Write a new poem on a completely different theme.

So I’m an idiot, and I’m sure you can see this coming from a mile away. When I collected all the work together it turned out it was all written by the same person, with that guy’s point of view, and displaying all of his obsessions and anxieties. As in, over and over, the poems turned out to be about anxiety, overwork, overstimulation, and their opposites: intimacy, relaxation, release. The poems resonate with each other, and of course they do.

And once I noticed what was happening, the poems I was writing started to change, and the output of poems on these themes dwindled, and that was it. That’s the book. Five years of poems telling me to shut up, slow down, let go. The poems aren’t a sequence or a long poem or anything, but taken together I have to admit they are a project, and that project is, well, book-length.

RM: How much is your work affected by the work of other writers? Do you return to a series of touchstones, or are you constantly taking in new material and allowing your work to adapt?

MM: Both. The epigraph to the book is from Gerard Manley Hopkins “My Own Heart Let Me Have More Pity On”:

; come, poor Jackself, I do advise
You, jaded, let be; call off thoughts awhile
Elsewhere; leave comfort root-room; let joy size
At God knows when to God knows what;

Hopkins’s best work is shamelessly weird music. It’s very syncopated, the grammar is twisted, he’s not afraid to make up new words, and he’s a master of enjambment. It’s got the same feel as Jones’s “shit / idiot graffiti” line, in terms of overall bumpiness.

When my boyfriend Paul and I first started dating, Paul was travelling a lot, and we would send each other poems. There is a poem in the book about this peculiar habit, called “On Receiving Robert Earl Stewart’s ‘The History of Baseball’ From a Lover by Email.” I kept a copy of all the poems together. This is my own private anthology I return to over and over. Paul is really into Frank O’Hara and David Berman and sent me a bunch of stuff I hadn’t read. And I sent him some of my favorite contemporary lyrics: “Idleness” by David O’Meara, “Prayers for the Sick” by Karen Solie, he sent me “Marram Grass” by Ken Babstock—we can quote sections of these poems to each other even now. “Lord, send a million goats to trouble to walls of old Yankee stadium,” and all that. There are poems in there by Kay Ryan, Matthea Harvey, Eileen Myles, Dean Young, DA Powell, Carl Phillips, Brenda Shaughnessy, Terrance Hayes, Matthew Dickman, Matt Zapruder, John Barton, Mark Doty, Mary Jo Bang.

Maybe it’s in keeping with my attitude toward standalone lyrics that what I return to is a single poem and not a body of work? That said, I occasionally have the experience of someone putting out a new book and me just obsessively waiting for it. I get that way with Mark Doty books, and I got that way with Sue Sinclair’s Heaven’s Thieves more recently. I love metaphor and these two really know how to lay one down.

In terms of new work, absolutely it affects me, if only to fill me with the deepest envy. The “I wish I’d written that poem” feeling is one I have frequently, and I try to let it be a guide for me in terms of pushing, striving, new directions. I get that feeling when I read or hear Brecken Hancock, Phoebe Wang, Stewart Cole, Fan Wu, Ben Ladouceur.