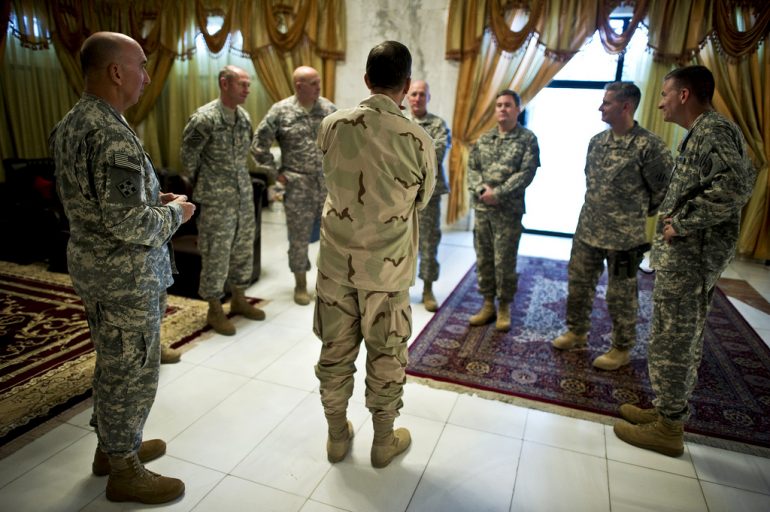 Believe it or not, for better or worse, March marked the thirteenth anniversary of Iraq’s American invasion. Maybe you saw it on your newsfeed. Most likely you didn’t. But as far as remembrances go, the output was business as usual—we got the obligatory flag-waving on the local stations, the quick clips of silhouettes at attention in formation. A number of mentions I saw discarded their historical contexts entirely, choosing instead to discuss the date in relation to that evening’s basketball.

Which is totally cool. If that’s your jam, then good night. But what was notably absent, as it always has been, were images and narratives of the Iraqis themselves. The ones whose lives have been irrevocably altered—in some ways cleaner than others, and none of them in the same way—living trajectories that’ll never be the same as what they knew. The Iraqi citizen simply doesn’t exist in America’s narrative today; they’re just the unpredictable other, deemed a type by necessity. And, to a certain extent, that isn’t entirely shocking for mass-media—but what’s distressing is the parallel of values in American literary fiction. In the one medium whose parameters should be malleable to perceived outsiders, the absence of these voices over the decade has been deafening.

Because that’s how long it’s been. And these vantage points, as integral as they’ve been to our own country’s image, have been wholly invisible, absent beyond the casual asides. Which isn’t to say we haven’t been privy to great works from Iraq and Afghanistan; on the contrary, it’s only gotten better as of late. Thanks to Lea Carpenter, Phil Klay, Matt Gallagher, and Ben Fountain (not to mention Kevin Powers, who all but opened the door), our understanding of the conflicts have been prodded, and expanded, proving again and again that it’s through fiction that we come to our conclusions.

But the rift between nations, as far as allowing their characters to speak for themselves, seems about as impassible as it’s ever been.

It’s a discrepancy Elliot Ackerman tackles in his novel Green On Blue: the narrative centers around an Iraqi kid forced into a militia by circumstance. That’s just the way it works out for him, the same way happenstance impacts all of us. But in crafting his narrative, Ackerman acknowledged the discrepancy between the people he wanted to portray, and the subtext surrounding them:

As an advisor, I went to war with these guys, fought alongside them. Coming home, my war buddies weren’t guys I could find on Facebook, or call up to get beers with at the local VFW, they were trapped in Afghanistan’s elliptical conflict. I’m never going to hear from those guys again. So I wanted to create a rendering of their world. To try to show how they lived and how they made their decisions. I came home and I saw the way Afghans are portrayed: they’re corrupt, they steal money, they’ll stab you in the back, they’re all high on opium all the time. None of the nuance ever gets conveyed.

Which, on one hand, could be the challenge of writing any other. As Daniel José Older has noted elsewhere, “the baseline is, you suck”. But it’s also one that Karan Mahajan, author of The Association of Small Bombs, has spoken about when crafting perspectives from individuals caught between geography and circumstance:

As for the range of perspectives, I felt I needed to explain the phenomenon to myself. Terrorism seemed absurd to me; and whenever I have that feeling I want to defuse the absurdity and flatten it, normalize it. I didn’t feel that modern literature — fiction or nonfiction — had done an honest job describing so-called “radicalization.” There was a widespread belief in liberal circles that terrorism was caused by poverty, when in fact most well-known terrorists in modern times have come from middle-class families, have degrees — often multiple degrees — and have lived between cultures. This was a space I felt I could enter.

Depending on which reviews you’ve read, it would seem that authors actively engaging the other are attempting an undertaking on par with quantum-physics—they’re doing an incomprehensible thing. Speaking words that’ve never been spoken. But, on the contrary, they’re partaking in the most fundamental of human dialogues: an attempt at empathy. Putting themselves their counterparts’ shoes. And the emotions of these individuals, irrespective of their geographic displacement, are no different than their own: they’re all in the same soup. It’s a notion that reminds me of this interview with Etgar Keret, another author who’s been crucified for attempting to extend the olive branch:

As this year cruises into the next, we’ll continue to discuss these wars. It won’t be frank, and it won’t be easy, but the conversations will happen. We’ll need the voices of those who’ve served, and the voices of those who haven’t; but just as importantly, if not even more so, we’ll need to acknowledge the voices of those on-site. The residents who’ve lived through it. The survivors in the center of the storm. Because in America’s literary representations of our Middle Eastern engagements, more often than not it’s the local that is other. And the message they’re holding is just as important, but the mic is almost never in their hands. If our literature ever hopes to pull sense from senseless conflicts, audiences on both sides will have to be ready to listen.