Home
»
Book Reviews
»
Nonfiction
»
Since When by Bill Berkson 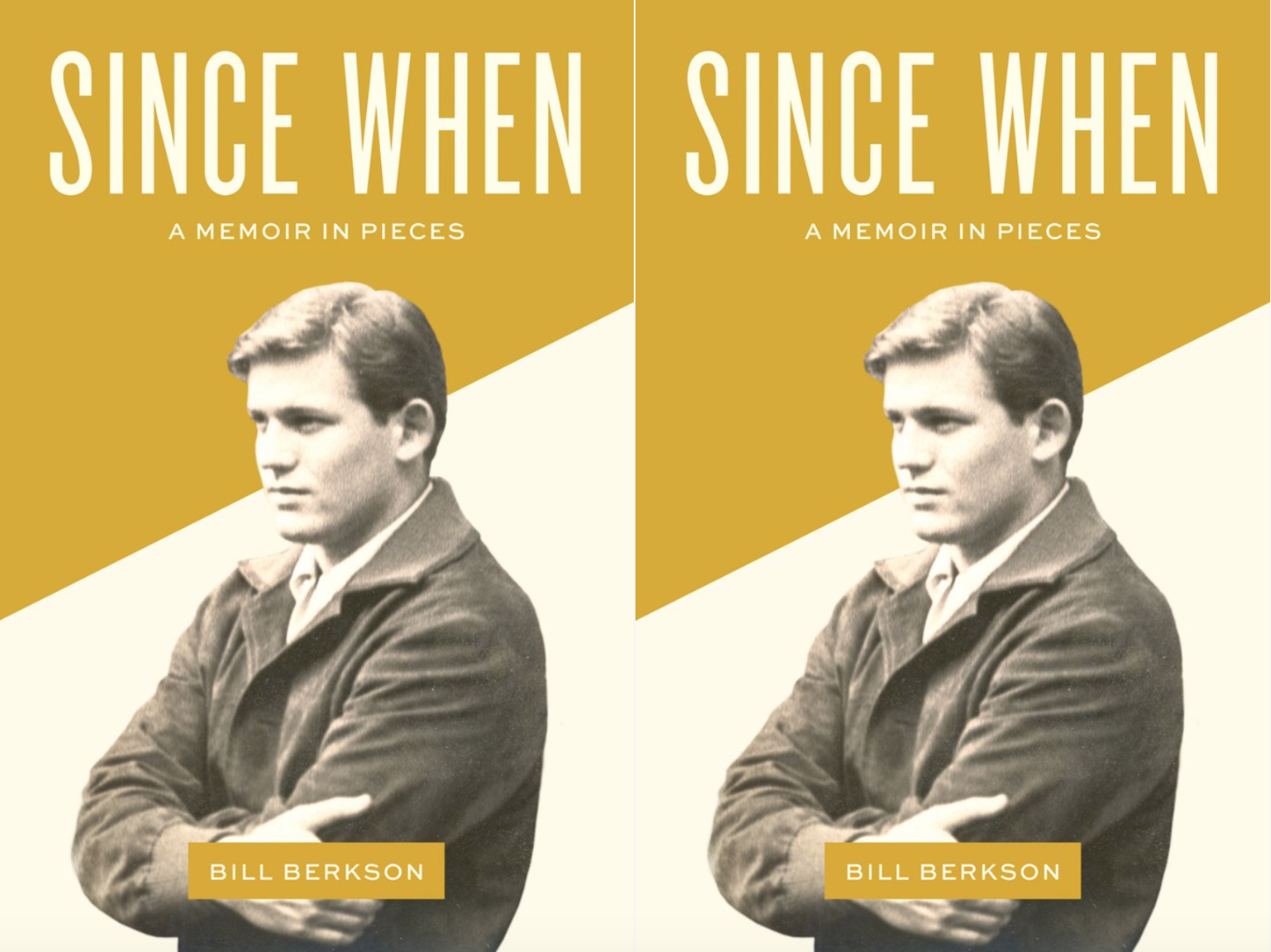 The old saying is certainly true: you can’t, or shouldn’t, judge a book by its cover. But titles, however, titles—especially subtitles—can be illustrative. The subtitle of Bill Berkson’s Since When, forthcoming from Coffee House Press, is “A Memoir in Pieces.” In any other book, that might serve as a warning: tread carefully, here be disorganization. Indeed, Since When is definitely disorganized; perhaps more appropriately, it is rumpled. In addition to straight memoir, the book includes miscellaneous notes, correspondence (by and to Berkson), scraps, and lists, including one of 100 women. It’s a disjointed affair.

Which in less capable, less charming hands might have been a detraction. But Berkson’s prose is effortlessly, deftly charismatic. His sense of pacing is incredible; he always knows when to switch to a short declarative sentence. Since When spends a good portion of its length dropping names yet does not come across as pedantic or annoying. Name-dropping is almost always unattractive, but Berkson does it so frequently and effortlessly that he never comes across as a social climber (which is what most name-dropping is all about). Not Berkson, who was born in 1939 and died in 2016. He just so happens to have been a poet, albeit less famous than his peers, who grew up across the street from Central Park, who was friends with Kenneth Koch and Frank O’Hara and Willem de Kooning in his early twenties and who, in part because of his parents—his father was a powerful, well-connected journalist and his mother a fashion publicist—rubbed elbows with the rich and famous from a young age. Since When is unlike any poet’s memoir I’ve ever read. It’s a treasure.

Much of the pleasure to be got from Since When is vicarious. Particularly if one is well-read; if ever there was a book that rewarded paying attention in art and literature classes, Since When is it. Watching young Bill Berkson casually chat with O’Hara (whom he was particularly close to, though not romantically) and Rauschenberg and Rexroth and Edwin Denby and Philip Guston is thrilling. Berkson was the ultimate fly on the wall, and through his evocative writing the reader gets to be the same. It’s thrilling to see one’s heroes in unguarded human ways (Ezra Pound is described as looking like “he belongs on a coin”), and Since When delivers the goods and then some.

Here’s a sample, from “Frank Sinatra”:

New Year’s Eve 1962, I was staying with my mother in Cuernavaca at the house of Merle Oberon and her husband Bruno Pagliai. The house itself was rumored to have been built by Cortés’s forces to serve as a women’s prison. (It’s across the street from the Palace of Cortés, with Diego Rivera’s murals in homage to Emiliano Zapata). New Year’s party guests included plenty of Hollywood notables—besides Merle herself, there were Dana Wynter and Greg Bautzer, Bill and Edie Goetz, Irene Selznick, and the man himself, Frank Sinatra. “Come meet Frank,” said Merle, leading me by the hand to where he stood in the middle of the patio. It was mercifully brief. She said my name, he extended his right hand to pat my elbow and, before turning away, flicked me a one-liner: “Good luck to you, kid.”

Lest it go unmentioned, “Frank Sinatra” precedes “My Generation,” a piece in part about Berkson’s attendance of Truman Capote’s famous Black and White Ball. A picture of Berkson and his mother at the ball behind Sinatra and Mia Farrow accompanies “My Generation.” The degree to which Berkson witnessed, much less took part in, so many of the major artistic events of the twentieth century—he was at the Black and White Ball!—really is astounding.

To return to Since When’s subtitle, that the book is a “memoir in pieces” cuts both ways. In a collection of pieces not all are equal, and some read less like full essays than half-finished scraps, better suited to an archive than a book. There’s the aforementioned “100 Women,” and “Ten Books That Changed the World,” which is precisely what is sounds like (I agree with Berkson about O’Hara’s Meditations in an Emergency but am less sure about some of his other choices). Indeed, as the book reaches its close, its pieces are increasingly fragmented. Where the first two thirds of the book positively hum along, the occasional quality of the work in Since When’s last few sections—now a piece reflecting on some books, now “Memory Snippets”—leads to a choppy reading experience.

But this fragmentation doesn’t equal a drop in quality; the book’s final pages contain diamonds. For example, “Journal Snippets: New York 1961-70” includes the following gem, a perfect capsule of time and place, about a night out with Ted Berrigan and Jim Carroll:

March 6
An all-nighter with Ted and Jim Carroll. At dawn we walk across town and have breakfast in a diner on the far west end of Greenwich Avenue. Returning eastward on Eleventh Street between Fifth and Sixth we see rubble we later learn is that from the explosion in an old townhouse, 18 West Eleventh, where members of the Weather Underground, including Kathy Boudin, the daughter of our poet friend Jean Boudin and her lawyer husband Leonard, had accidentally set off a bomb they were in the process of making. Kathy was wounded but survived; three of the group were killed in the blast. The street was a mess. A bookcase hanging at a forty-five-degree angle from the next-door house turned out to be Dustin Hoffman’s.

Tags:Bill Berkson, Since When