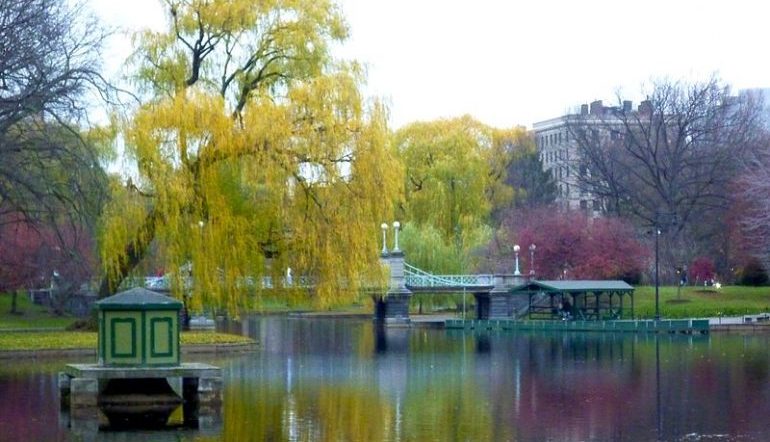 We’re still recovering from last week’s Q&A with Tony Hoagland here in Boston. Ploughshares poetry editor John Skoyles still had a few nagging questions, and Tony graciously agreed to an interview. Enjoy reading his thoughts on what he loves to read and teach, accompanied by images from his Q&A.

1. Can you recall the first poem that had a forceful effect on you?

It was probably something by John Masefield or Carl Sandburg, or Kipling. But the first modern poetry that I met was an anthology in high school, which I remember with great clarity. It was called New Voices in American Poetry, edited by David Allan Evans, and my first introduction to a host of poets, from Mark Strand and Erica Jong to Dabney Stuart and Dave Smith. It had photographs, too, so for me it was like People magazine. I would look at the photo, read the poem, then look at the photo again. I was hooked.

2. You mentioned comic poets like Kenneth Koch in your talk at Emerson. What other poets in this vein do you enjoy?

There is sly humor hidden in some of the most canonical places: the inner humorist in Auden, or Cummings and Stevens, or Ginsberg, Pound, Hafez, and Rumi. Tonal compression is intrinsically funny, I think, so someone like Grace Paley or even Louise Glück, thought of as so serious, can be hilarious.

More from Tony Hoagland on teaching and his new book after the jump.


3. Can you talk about the course you teach on twentieth-century poetry at the University of Houston?

Most poetry students don’t have much of a systematic or chronological sense of poetry; we come into reading in such sideways and haphazard ways. So I teach a course which is a fast-forward, decade-by-decade gallop through the twentieth century, covering approximately a decade each week: cultural context, major poets. A Profile of Twentieth-Century American Poetry, edited by Jack Myers and David Wojahn, is a good companion book; it covers the historical canon one decade at a time.

We start with John Greenleaf Whittier and Oliver Wendell Holmes (not Walt Whitman) to see what Ezra Pound and the Imagists were reacting to in the aughts, and continue to hack our way forward: the heroic modernists, the outriders (like E.A. Robinson), the second generation of modernists, the socialist ’30s, the New Critical poets, the ’50s movements, the ’60s revolutions, the ’70s surrealism and narrative.

It’s impossible to do right, but the student leaves with a rough chart in her mind of layer after layer, generation upon generation, aesthetic renewal after aesthetic displacement. Having a framework, one can spend a lifetime filling in the gaps and modifying, augmenting the map. It’s a very satisfying course to teach.

4. Who was your first important teacher?

My teachers have largely been the poets and critics I have read. In that sense, my teachers have been too many to count. I too wanted a father-figure-teacher-mentor, but I couldn’t find one when I most needed it, and learned to do without.

Later, I did find some mentors: Steve Orlen and Jon Anderson in Arizona; Carl Dennis in long-distance correspondence; Ellen Bryant Voigt at Warren Wilson. The essays and poems of Robert Pinsky have taught me an enormous amount, though I don’t know him well. But the friendship and passionate conversation of friends and other poets (David Rivard, Marie Howe, Jason Shinder, many others) is the great ongoing tutorial, and one of the greatest treasures of a life in art.

5. You said you read a lot of prose. Can you give us some titles?

A Blue Fire by James Hillman. The Fever by Wallace Shawn. The Hunter Gracchus and Other Papers by Guy Davenport. Timebends by Arthur Miller. Five Skies by Ron Carlson. Reality Hunger by David Shields. A lot of detective novels, too.

6. Tell us about the book of prose you’re working on.

I’m working on a book that describes the rules, stages, degrees, and styles of association and disassociation in contemporary poetry, tentatively called The Art of Association. I originally thought it would be a primer (for the uninitiated) on the New Poetry, but I decided I’m not qualified to write that one–though someone should.

Writing essays is a way, for me, of figuring things out in plain terms, and I guess I think that–counter-intuitively–as American poetry has become more and more abstract, gotten more MLA-ed, stylized, and jargonized than ever, our poetry needs someone not afraid to be Dumb, to try to figure it out for us civilians.