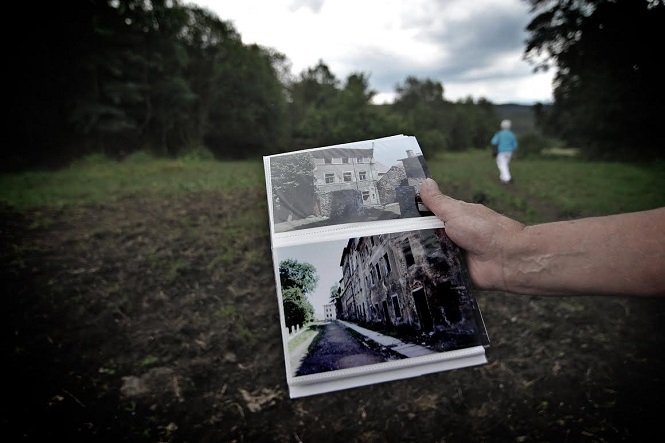 Filip Springer’s History of a Disappearance was originally published in 2011, but the English translation, courtesy of translator Sean Gasper Bye, was released last month by Restless Books.

The town of Miedzianka lies in the southwest corner of Poland, near where the country currently borders Germany and the Czech Republic. I say currently because Miedzianka, formerly known as Kupferberg, existed long before those borders did, with history stretching back to the Austrian Habsburg Monarchy and even further. The town survived seven hundred years of border shifting, war after devastating war, fires, looters, occupiers—but today, it has been reduced to a collection of ruins and less than a hundred residents.

What happened to Miedzianka? That’s the question the Polish journalist Filip Springer set out to answer in History of a Disappearance: The Story of a Forgotten Polish Town. Springer combs through archival records, hunts down personal correspondence, and collects a series of interviews to try to preserve the history of a town that history erased. It’s a very thorough examination, oscillating between big picture historical/geopolitical context and telling the stories of the individual lives, stories that almost sound like segments from This American Life. Despite the thorough research, Springer does not limit himself to a dry, distant reporter’s writing style—he inserts himself into the reporting at the occasional appropriate moment, he comments, he guesses, he uses artful metaphor and repetition. It’s obvious on the page that Springer has fallen in love with the town, with its story. Some chapters read like a brochure for a place that no longer exists.

Reading History of a Disappearance, I was struck by the ways rural life in Poland both overlaps and diverges from rural life in the US. There’s a sense of prideful self-sufficiency, as well as a strong dose of nihilism. The characters of Miedzianka, like those in any small town, are known primarily by their occupation. This one is the baker, this one the leatherworker, this one the teacher. The brewer complains because his water supply keeps being interrupted in the middle of the night; the town investigates and finds out a farmer is diverting the municipal aqueduct into his fields by stuffing old rags into it. In the author’s conversations with former residents, all of them are iron-clad certain they knew what was going on in the town, but they have only gossip as their source and they contradict one another. The town hall’s cellar, where council meetings took place, had a sign over the entrance that read “Drunkenness is the councilman’s vital duty, a dry lamp offers no light.”

All of these things sounded familiar, variations on stories of the rural life here, but Miedzianka has a few centuries of extra history behind it than American towns. Having been occupied and a part of multiple countries gives its flavor of nihilism a little different tinge. Wars are perceived as both inevitable and abstract, measured only in the disappearance of men and the increased price of goods. In the 17th-19th centuries, multiple large fires and epidemics are matter-of-factly attributed to a curse. The rise of Nazi Germany is at first seen as a mixed blessing for the town, leading to lucrative jobs working on the autobahn, but also political persecution and angry bands of Hitler Youth harassing the town’s priest. A half-Jewish man is protected by virtue of the fact that he’s the only pharmacist for miles around. We might expect the close-knit town to protect its own from the enforcers of Nazi ideological purity; instead, Springer finds stories of neighbors quickly turning on each other, reporting people and the being first in line to loot the emptied house.

The beginning of the end of Miedzianka comes with Soviet Russia discovering uranium in the abandoned mines near the town around 1950. A few people Springer interviewed said the town knew what was being mined, and some didn’t, but one says, “what difference does it make if we knew, since no one told us how harmful it was. They didn’t tell us the uranium was killing us, we only found out in the nineties, but by then it was too late, because half of us were already six feet under.” Miners would get a toothache and die shortly after, but Soviet police kept the mines running, often through violence, intimidation, and even a handful of alleged murders with rumors of bodies being disposed in abandoned mineshafts. Pregnant women worked in the mines, too. Over six hundred tons of uranium were mined from the region around Miedzianka.

“That last ones live on the outskirts of town, they occupy only a few houses, they don’t make themselves obvious. No one knows if they still hold out hope, or if they stayed simply because they no longer have the strength to change things.”

The town disappeared slowly. Some buildings were demolished, some were swallowed by holes created by the abandoned mines underneath the town. Some interviewees blamed Russians, some Romani. Former residents, scattered across Germany and Poland, had a memorial placed on the site of the old town square that reads, “Rest in Peace. You Are Not Forgotten” in both Polish and German. The memorial, a handful of buildings, and the memories collected in pictures and documents are all that remain of the seven-hundred-year-old town. And now this book. “I don’t suppose it’s a good thing,” Springer writes, “not to notice the disappearance of an entire town.”