Home
»
Uncategorized
»
So Sue Me…

Consider this a public service announcement.

Over an apostrophe and the letter S.

In a literary short story.

Bear with me, because this story is about you.

Like most writers, I went through that college phase of starting every story with an epigraph taken from a song, and of having characters quote poetry at length. I once gave a story a title taken directly from a line of Bob Dylan’s “Subterranean Homesick Blues”— lyrics I’ll just cautiously say were something along the lines of “you don’t need a BLANK man to BLANK which way the BLANK BLANKS.” Did the story have anything to do with that line? No. But the title made my story cooler, which was the point.

I mostly outgrew the habit—but then, we all write in an echo chamber, constantly alluding and referencing and paying homage. Quotation seems the second greatest form of flattery. I became, perhaps, too comfortable with this assumption. 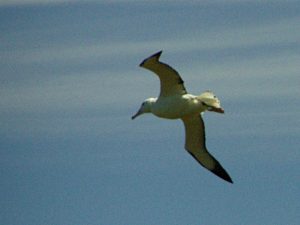 This albatross is protected by various environmental agencies, but he is also in the public domain.

About six years ago, I wrote a short story called “Painted Ocean, Painted Ship,” and quoted in it, of all things, a line from the 1957 musical The Music Man. Please note that I hold no special fondness for The Music Man—in fact, since my children, in the intervening time, have gone through an interminable Broadway phase, I can say I fairly well hate the entire show—but I wanted those lyrics in my story. My fictional college English professor had accidentally shot an albatross, and her colleagues enjoyed harassing her with allusions to Samuel Taylor Coleridge’s “The Rime of the Ancient Mariner.” One of them starts singing Professor Harold Hill’s soft-shoe number “The Sadder but Wiser Girl for Me”—a reference (yes, I’m a nerd, and it’s a story about nerds, shut up) to Coleridge’s closing lines: “A sadder and a wiser man / He rose the morrow morn.”

This character sings the title, which is part of the chorus—and in fact if I’d stopped there, I’d have been fine. Titles aren’t protected by copyright. This is why you could publish a book tomorrow called The Great Gatsby and we could all think you were an asshole, but no one could sue you. But I had my character sing one additional line, a line which (well, here are the lyrics—see that second-to-last line for yourself) consists of the same words, slightly rearranged, plus the word “is.” Not even the whole word, actually, just an apostrophe and an S. 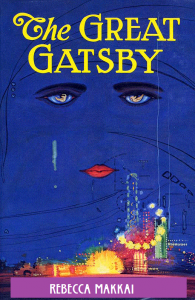 See what I did there?

I didn’t think about it twice. I sent the story out, and it was accepted at a lovely journal called Ploughshares. It appeared, and the sky did not fall. Shocking as it might seem, the musical theater world did not take particular notice of my obscure short story.

A year later, the piece was picked up for The Best American Short Stories 2010, whose publisher, Houghton Mifflin Harcourt, had me fill out an extensive legal questionnaire. It asked—and I asked myself, for the first time—if anything in my story was quoted from another source. I scoured the story, made a brief note on the form (basically just the song title, no big deal!), and assumed everything would be fine. HMH, also optimistic but doggedly thorough, tracked down the agency that handled the rights to the song.

The agency responded swiftly: using that line would cost me three thousand dollars. 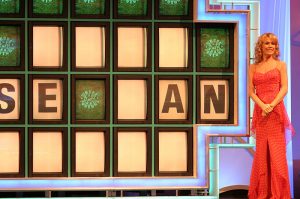 It was a flat rate. For the exact same price, I could have mounted a full-scale high school production of The Music Man in my back yard, complete with mumbling tenors and moldy rented costumes. But all I needed were that apostrophe and that S! I remember thinking that Vanna White would have cut me a far better deal. (At the risk of disillusioning any aspiring writers who want to believe there are big bucks in short story writing, I’ll just say this amount was quite, quite a lot more than I’d made from Ploughshares and BASS combined.)

The woman from HMH wrote them back to explain that this was a literary short story, that we weren’t trying to air it on TV or something. The response (I’m tightly paraphrasing so I don’t get sued for copying the email) read: “Sorry. The rate is $3,000 for 300,000 copies. And, to be frank, the writer should be grateful we’re not taking action against her for using the lyrics previously when the story appeared in the journal.”

And so we speedily shut our mouths, and I changed the story (my character now “bellow[s] out the chorus of the song” after singing the title), thanked my lucky stars, and made damn sure to learn how to check what was in the public domain. (My characters really like big band music now. Anything written before 1923, they’re totally into. They’re very retro that way, my characters.) 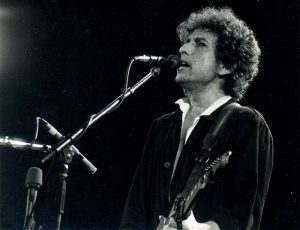 Bob Dylan might sue your ass for stealing his lyrics. But this photo is in the public domain.

When I run workshops, I so frequently see fiction that quotes liberally and gorgeously—and completely illegally. Every chapter starts with a movie quote! A character sings an entire Beatles song! I’ve alarmed more than one workshop by flapping my arms and, instead of discussing character development, warning the poor writer that she’s on the hook for two months’ rent unless she changes her epigraph immediately.

And really, the writers already know this. They nod and assure me that they plan to change the line as soon as they think of something better. But I don’t believe it. One thing leads to another, and soon the story is finished and polished, and you could no sooner change those words than change your own arm.

So I’m here (chagrined, skittish) to tell you not to do it. Not even for a moment. And if you have to do it, for the love of Pete Seeger, do it for someone cooler than The Music Man. Do it for Springsteen, for Janis Joplin, for Dylan. (I hear Dylan can be bought.)

Or just don’t do it at all. There are far more exciting ways, I’m sure, to end up sadder and wiser.