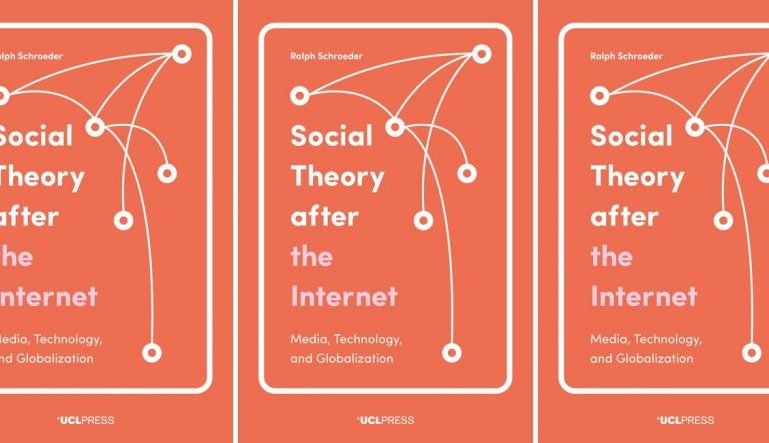 As tech companies aim to embed their products and services ever more deeply in our everyday lives, one of the questions we should be asking ourselves, if we’re not already, is whether technology shapes society, or society shapes technology. Ralph Schroeder, a professor at the Oxford Internet Institute in England, believes it’s the former, and that it’s about time the social sciences start acknowledging this.

Technological determinism or “shaping,” is one of the threads running through his new book, Social Theory after the Internet: Media, Technology and Globalization. In it, Schroeder argues for a single, unifying theory of the internet in the social sciences. “There is currently a gap in theories of the role of the internet,” he declares, contending scholarship has become too specialized to encompass the internet’s “wide-ranging” influence. A new theory needs to comprise disciplines such as sociology, political science, and anthropology. And, he continues, a new theory must account for the unique place that the internet occupies in communication: the internet is both “mass media” and “interpersonal communication.”

Despite its ambitions, the book is not without the academic genre’s requisite circumspection. Schroeder tempers undue expectations, cautioning against the “‘sociology of the last five minutes’…whereby recent technological trends are seen as beckoning huge transformations.”

Each of the main topics of the book—politics, everyday life, and big data—are examined in four countries: the US (liberal democracy), Sweden (social democracy), India (elite-skewed democracy), and China (authoritarian). Schroeder readily admits “the argument may apply beyond these four,” but “they are useful cases from the point of view of the comparative method: the first two are at opposite ends of the spectrum among advanced democracies, the latter two provide alternative models of developing countries.”

If you are not coming to Social Theory after the Internet with a firm knowledge base in the social sciences, diving into this academic conversation can be rough. There is the choppy, perhaps unfamiliar nomenclature (technoscience, mediatization, asymmetries of power). And the starting and stopping as you engage with the many theories and concepts (agenda-setting theory, actor-network theory, Weber’s iron cage of technology, Gellner’s rubber cage of user-friendly technology, media as a transmission belt between people and elites, et al.) necessary in connecting the strands of Schroeder’s big picture.

That said, the book is worth the effort for a general readership interested in further understanding some of the forces of technology at work in contemporary society—here with respect to politics, sociability, information-seeking, and advertising. I came to it from a more general perspective, having recently read a string of texts sounding the alarm on what Big Tech is doing to our brains and our democracy. Schroeder’s book is more POV-neutral, exploratory.

A fascinating chapter looks at how the internet has given rise to right-wing populism by circumventing traditional gatekeepers, with prime examples Donald Trump and Narendra Modi using Twitter in recent elections. Here Schroeder employs the media as transmission belt metaphor: “Trump did not directly speak to his audience via Twitter—too few Americans are on Twitter. But he could rely on traditional media to broadcast his new media messages.” And in a market-based media environment such as the United States, traditional media “were compelled to report his views” originating and getting clicks on digital media. (Another gap in past internet research according to Schroeder: much fails to recognize the importance of traditional media, especially during elections.)

The middle chapters focus on sociability and information-seeking. The internet “tethers” us to each other, Schroeder writes, but to what extent and purpose? For our information-seeking behavior, he establishes the internet as infrastructure, acknowledging that search engines, generally, and Google, specifically, should be seen as a new type of gatekeeper.

However, despite Google’s critical function at the crossroads of the internet, some of Schroeder’s assertions about the famously “Do no evil” company feel off, or outdated. On their operations, “[Google] is a gatekeeper in controlling visibility and does so largely in a neutral way.” Yet recent reports provide evidence to the contrary; that Google searches, where Google has a stake, can be skewed. Schroeder’s too-trusting faith in the Google algorithm, that it is shaped only by what users want to find, without acknowledging its potential for corruption, seems simplistic for his considerations of “infrastructure.”

In one of Schroeder’s analyzed countries, of course, Google is not a consideration. China, with its separate set of infrastructures, including search engine Baidu, shows a country not dominated by American Big Tech. It’s different in other ways, too, such as politics and censorship. Of the four countries, China often is the “except for” case in Schroeder’s analyses.

His final topic in the book is big data, with its attendant privacy concerns and audience-targeting capabilities. The current Orwellian debates on big data are off-track, Schroeder writes. The future is Huxleyan: “…where companies and governments are able to shape people’s minds, and do so in such a way that users, knowingly or unknowingly (and it may not be easy to tell the difference), come to accept and embrace this.”

As this relates to news and media coverage, Schroeder offers a familiar (if perhaps contrary) view of letting the audience dictate the content, updated for big data:

…targeting and tailoring content to what audiences want…entails a weakening of media autonomy or of editorial or journalistic control. It is akin to tabloidization or ‘infotainment’ in the sense that media cater to what they think audiences want. These trends have intensified with competition among new and old media, but what is also new is that digital media targeting is based on direct measurement of user behavior.

But because the internet occupies that space within both “mass media” and “interpersonal communication,” doesn’t this ‘tabloidization’ feel even more pervasive in our lives, and threatening, and urgent? Maybe this is the sociology of the last five minutes, or maybe it’s the internet moving in real time.

How Schroeder measures the emergence of big data, along with the book’s other shaping forces, into a social theory for the internet can be a challenge at times, yet it’s also modeled from recognizable situations and behavior. You may be surprised by his conclusions, no matter the lens through which you read the book. There’s no clickbait here.