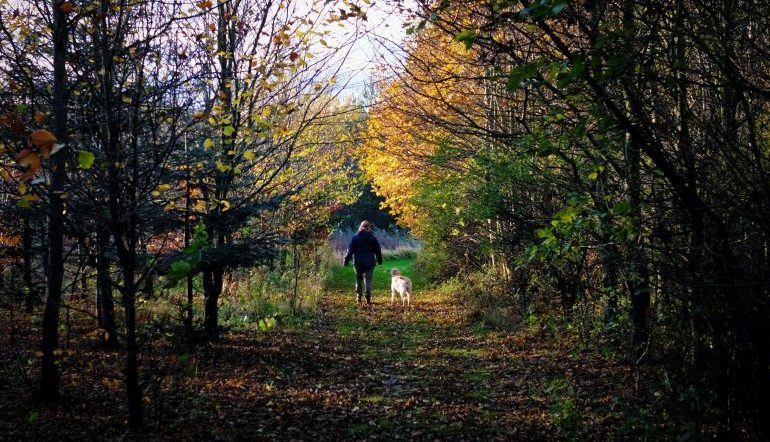 Solvitur ambulando–a phrase that dates to Diogenes: “it is solved by walking.” If writers had a flag, this could be its inscription. Feeling stuck or distracted? Stressed, uninspired, rageful, confused? Go for a walk. For more than a quarter-century, Schopenhauer kept the same daily schedule: up at seven, a bath, coffee for breakfast, at the desk until noon, a half-hour of flute practice before lunch, reading until four, and then he walked. Whatever the weather, he walked for two hours. In the evenings, more reading and a meal, maybe some music or theater. Sounds pretty damned ideal.

[A]s the desire to take a walk came over me, I put my hat on my head, left my writing room, or room of phantoms, and ran down the stairs to hurry out into the street.

Clocks were set by Kant’s post-supper walks in Königsberg. Wittgenstein was a walker. According to his journals, all of Kierkegaard’s books were composed while on foot, including revisions. Coleridge, Wordsworth, Rousseau–all meditative walkers who transposed strolls into literature. In Confessions, Rousseau claims he can “meditate only when I am walking. When I stop, I cease to think; my mind only works with my legs.” For months, he walked from Paris to a Vincennes dungeon to visit Denis Diderot, imprisoned for crimes against God, the state, and somebody’s mistress. The Enlightenment unscrolled from walking philosophers.

I quickly forgot that up in my room I had only just a moment before been brooding gloomily over a blank sheet of paper. All sorrow, all pain, and all grave thoughts were as vanished. […] I was tense with eager expectation of whatever might encounter me or cross my way on my walk.

Some of us walk because we’re chased by a mood; some seek inspiration. Virginia Woolf often walked the eight miles from Monk’s House to Charleston. While walking around Tavistock Square one day, she “made up” To The Lighthouse “in a great apparently involuntary rush.”

I walked daily for nearly two decades in Chicago–part transportation, part exorcism from whatever work had churned up, and part replenishment. Urban walks are instigators of imagination. Charles Reznikoff, who often walked twenty miles a day in Manhattan, would harvest a single image or a vibratory moment, return home and let it seed a poem. Short stories, for me, often burst from an entanglement of image and mood that becomes combustible. Walking Halsted one afternoon, I passed a fenced cement schoolyard and caught a flash of two little boys, one signaling the other to kiss his crotch. That seized me for some reason. Within a week, I wrote three different stories trying to depuzzle it.

Some walk as pilgrimage, like Werner Herzog’s walk to Paris for Lotte Eisner, or, in the Eighties, when he declared “that now only the poets can hold the country together,” and tried to walk around Germany. Some walk to practice psychogeography, a grittier version of Baudelaire’s flâneur. Instead of perambulating Paris, for example, walk from Kennedy Airport into Manhattan, like Will Self did. Or from LAX to downtown Los Angeles, or Heathrow to South London. Serious walking, often without benefit of sidewalks or people willing to give directions. “In the post-industrial age, this is the only form of real exploration left,” Self explains. Walking frees us from the “windscreen-based virtuality” of driving, which also eliminates contact. Self began walking after getting sober in 1999; he walks in part to not think, as an act of meditation or “absurd satori.”
Walking is a great mind-quieter. Andrew Sullivan recently groaned that he needs “at least a day of detox” to toggle from prolific blogger to “longer, calmer modes of engagement.” Most of us struggle with this same transition. I say: solvitur ambulando. And leave the phone at home.
“Things come clearly while one walks,” wrote Thomas Mann. While working on a novel in Chicago, walks seemed to agitate me, so instead I ran the shores of Lake Michigan each dusk. It always dissolved the day’s work-knots. A wandering mind is more creative, and nature facilitates insight, scientists are finding. Memory, attention and cognition are all improved by time in nature, as is mood. Relaxation of the mind is “crucial” to insight, according to a cognitive neuroscientist who studies such mysteries. Philip Roth takes late afternoon walks, “to figure out connections and solve problems in the novel that’s possessing him.”

Without walking, I would be dead, and my profession, which I love passionately, would be destroyed. […] Without walking and the contemplation of nature which is connected with it, without this equally delicious and admonishing search, I deem myself lost, and I am lost.

Like Schopenhauer, C. S. Lewis walked daily at two, returning “not later than a quarter past four.” Such walks should be silent if not solitary. “Walking and talking are two very great pleasures,” he wrote, “but it is a mistake to combine them.”
Whitman, Melville, Emerson and Thoreau–all devout walkers. The transcendentalists preferred nature, but Whitman, as Henry James observed, “felt the human crowd as rapturously as Wordsworth felt the mountains.” Others walked across landscapes, opening them into books–Robert Walser, Bruce Chatwin, W. G. Sebald.
When fate interposed Colorado on the brink of a move to New York, I was livid, convinced that I needed urban input to write. City streets fuel and console me. But here, I’ve written three books in three years. I can cross a street and be in the mountains, which my dog insists we do daily. Mountain hikes create an inner spaciousness, a kind of receptivity I lacked in the city. Aldous Huxley’s father “considered a walk among the mountains as the equivalent of churchgoing.”
Jim Harrison is a hearty walker, preferably in the woods with a dinner-fetching bird dog. His friend, the poet laureate Ted Kooser, continued his daily walks in the Nebraskan countryside while recovering from cancer. He had to walk before dawn to avoid the sun, so to garden the darkness of the cold and his moods, he wrote postcard poems to Harrison each day.
Walking is wakeful. We can walk fogged in thought, or walk to see newly. As AIDS crept up his legs and ate into his brain, my friend John could still walk, so we did, very slowly. I picked him up at his blue coach house to walk the half a block to our regular fireside dinner table in Ann Sathers on Belmont. While I chirped anxious anythings, he suddenly blocked me with his cane. I halted. “Look,” he said, pointing to a branch filled with scrappy white blossoms. “I’ve walked past this house for years and years and I never noticed that before. Maybe everyone should walk this slowly.”
“My God is the God of Walkers,” claimed Bruce Chatwin. “Mysteriously and secretly there prowl at the walker’s heels all kinds of beautiful and subtle walker’s thoughts,” wrote Robert Walser, author of the interstitial passages above, in The Walk.
It was true when we were squalling about the house as kids and a parent yelled at us to go outside, and it’s true today. Our moods and minds are altered by walking. Rebecca Solnit writes that “modern life is moving faster than the speed of thought, or thoughtfulness.” We can reclaim much just by parking our gadgets and leaving the house.
This is Carol’s twelfth post for Get Behind the Plough.
Images 1, 2, and 3