Home
»
Interviews
»
“Sometimes you just need to be told about yourself”: An Interview with Erica Dawson 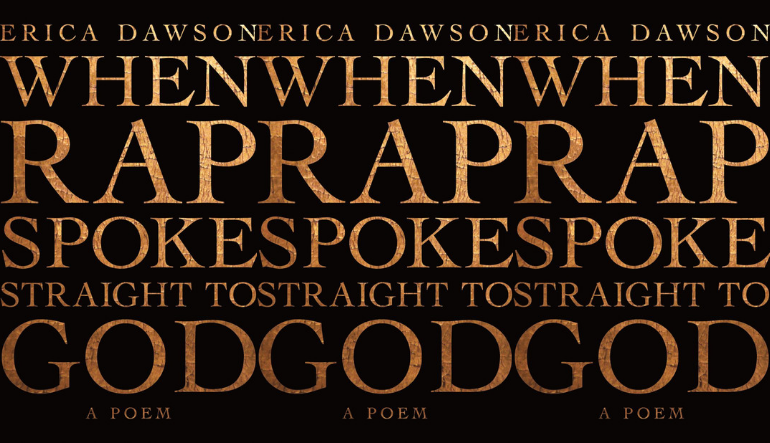 Heraclitus, the “Weeping Philosopher,” described the Greek oracle Sybil as “[a] frenzied mouth [that] utter[s] things not to be laughed at, unadorned and unperfumed, yet reaches to a thousand years with her voice by aid of the god.” Poet Erica Dawson’s remarkable new book When Rap Spoke Straight to God describes our tumultuous present with all the tenacity of the ancient Sybil. Like her previous collections Big-Eyed Afraid (2007) and The Small Blades Hurt (2016), When Rap Spoke Straight to God (2018) exhibits Dawson’s long-standing facility with poetic forms in a rare mix of embodied tradition and raw nerve, but over the course of this book-length poem, traditional forms change and evolve, fracturing and shimmering in a rangy, multivocal, supremely confident masterwork that can hang with those epic stars of American poetry Paterson and The Wasteland. Like The Wasteland, Dawson’s When Rap Spoke to God explores the music as well as the silence around the music, the forewarning and the recollection, the mystery and mystery exposed. Hers is the voice in the cave uttering things “not to be laughed at,” though we do laugh because Dawson’s sense of humor is uncompromising, and it is in fact adorned, because Dawson knows how to massage beauty out of a language that has been used to marginalize women of color since time immemorial, perfumed with the stuff of life: Nas and Method Man, Lil’ Kim, and Freddie Gray.

I recently caught up with Erica in Tampa where she is an associate professor of English and Writing and Director of the Low-Residency MFA program in Creative Writing at the University of Tampa. I wanted to know what changed her attitude toward poetic form, how she began and sustained such a long poem, and where she sees her work headed.

Lesley Jenike: How have your ideas about poetic form evolved from Big-Eyed Afraid to When Rap Spoke Straight to God?

Erica Dawson: In Big-Eyed Afraid I was obviously interested in form, and I still am. But I was interested in following the exact rules and specifications of a given form. If I was writing Tennyson-style “In Memoriam” stanzas like I often did, they had to be on point. I was allowed one metrical substitution per page. There were no slant rhymes. I wanted to be that strict because I was really interested in showing or proving to myself that these traditional forms weren’t just a space for, you know, old white men of a certain socioeconomic status that lived in England in the fifteenth and sixteenth centuries. I tried to prove to myself that I had a place in that poetic space. So, I was really adhering to the rules and restrictions of the form.

As I moved my way through the second book and then finally to When Rap Spoke Straight to God, I was much looser with myself. Obviously, there is form throughout the entire book—there are sonnets that turn into sestinas and villanelles and haiku—but I felt much more of a sense of freedom in combining some of those forms and breaking some of those rules because the content was calling for me to break the rules.

LJ: When Rap Spoke Straight to God is a book-length poem. What was your process for writing such a long piece?

ED: After The Small Blades Hurt came out, I was just doing the whole “oh, let me just write some random poems, you know, I don’t really have an idea for a manuscript” thing. Having an idea for a manuscript at the very beginning is not my best look, so I was just experimenting with different stuff which was feeling pretty political as we were moving out of 2014. Then 2015, with the election, came up and I just had all these various poems but I wasn’t seeing connections between them. Then I went—as I usually do in the summer—to teach at the DISQUIET International Literary Program in Lisbon, Portugal. This would have been the summer of 2015. So, I’m at the faculty reading, you know, up front, doing my thing, and Eileen Myles is also on the faculty. They were a distinguished guest visiting some of the classes.

So, I’m up there reading my poems and they’re sitting on the floor in front of me because there’s not a lot of seating in that particular room. I get through the reading, you know, trying not to look at their face so I can see their judgment.

They raise their hand after I’m done reading and I’m like, “Yes, Eileen?” and they say, “I have more of a comment than a question,” and I’m like, Oh God, here we go. They’re about to workshop me in front of all these people, and they say, “I really enjoyed the poems, but something about them feels unfinished, like there’s more that you have to say.”

I was completely mortified. But once I got over the mortification and a couple of tears, I decided to accept Eileen’s challenge and push myself to write longer pieces. Then once I got in that mode I realized that a lot of what I was writing was just a single poem. I could see the trajectory starting to appear and that one of the poems that I had written was the midpoint in the manuscript. So, I sat down and I was like, OK, how would this book-length thing start?

It really came about because of Eileen’s comment. They were totally right. Sometimes you just need to be told about yourself, you know? It was time for me to challenge myself in a way that I hadn’t with the previous books and try something different. Once I convince myself that I’m going to do something, then I’m going to do it. In the end I’m going to follow through with it. That’s just the way that I am.

LJ: Did you read Eileen’s work as you were writing the book?

ED: I actually didn’t read any poetry while I was writing the book. I stayed exclusively to prose because I felt like I needed to be totally immersed in the poem that I was writing.

LJ: Can you remember any of the novels or nonfiction that you were reading at the time?

ED: I would’ve read [Colson Whitehead’s] The Underground Railroad at that point. Also, A Visit from the Goon Squad. I think in a lot of ways that novel was particularly helpful, though I wasn’t expecting it to be. But the way [Jennifer] Egan jumps from story to story without giving us clear transitions and allows them to come together at the end was freeing for me and made me remember that with this long poem, I didn’t have to be like, OK, reader, now I’m going to talk about this time that I was in a gas station! And then, OK, reader, now I’m going to talk about Jesus having a gun! I could just make those transitions without being so explicit. I’m also really interested in the way a novelist sustains a narrative over a gigantic space. It was helpful to follow their [processes] but then in other ways it just heightened my awareness that I have no sense of plot or character development and that the book-length project that I was working on needed to be image-driven and not story-driven.

LJ: Where do you think you’re headed as a formalist?

ED: I actually just did an interview for a student of a friend of mine who’s working on a research paper about form and free verse and I told her, “I don’t think that I’m ever going to be exclusively free verse.” My brain can’t operate without some sort of organizing principle, and that’s not to say that free verse writers don’t have an organizing principle, but I need some sort of idea of the number of stresses I’m going to have in a line. I need a certain idea about how the poem is going to progress. I need some sort of formal construction and I’m not great at coming up with my own yet. I’m still reaching into those received forms. I don’t really know if that’s ever going to change, but I do think that my use of those forms might continue to become a little bit looser, and I also think that I’ll continue to be interested in things that are more syllabic, like the haiku that appear in the book, versus things that are accentual—so, a different understanding of meter. I’m still a formalist to some extent. Now I prefer the term “Erica-ist” instead of a “formalist.” I feel like I’m just doing my own thing.