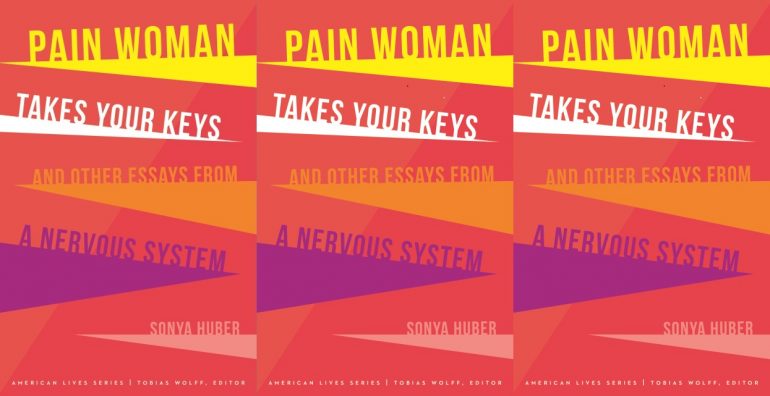 On the day I wrote this post, the Columbus Dispatch ran an oversized black and white banner above the fold reading: “Start Living Pain-Free Today.” We see messages like this every day in TV commercials, ads, and across the web, don’t we? Sonya Huber, however, makes the subject of pain and healing—and disability—personal.

Her collection of essays are not maudlin, self-pitying, or self-absorbed. Nor are the twenty-eight traditional and lyrical pieces redundant. Pain Woman Takes Your Keys and Other Essays from A Nervous System, which comes out tomorrow, instead arrests readers’ interests in ways that are relatable and sometimes gut-wrenching. Sometimes even breathtakingly beautiful, because no one is immune to pain.

Huber, around forty years of age, took her frequent and increasing pain as a sign of simple aging. Until that pain made it difficult, if not impossible, to do daily things like play with her son or make it through a workday as a professor without exhaustion. In trying to get at the root cause, she was shuffled from her primary care physician to a series of specialists to pill mills and pain centers. She doesn’t navel-gaze about her diagnoses of rheumatoid disease and Hashimoto’s thyroiditis. Nor does she mire the story with details about hospitals or treatments or quotidian events.

No, this is an author who takes us on a political yet poetic journey into the heart of gaps in the medical system, objectifying pain as if it were an object she could hold in her hand and spin around and examine. As the book progresses, she seems to spin that sphere to give us different perspectives of pain, what it is, who it affects, and how others react to someone in pain. Material handled in a manner like these essays contains impressive universality, worthy of a large readership. Those with depression, fibromyalgia, rheumatoid arthritis, or myriad other types of pain from diseases and conditions—even romantic breakups or family deaths—will find it relatable. However, before this University of Nebraska Press book has a chance to become whimsical or superficial, its author controls the prose with grace and elegance, and some humor.

Huber’s prose is poetic, yet never becomes cloying in her deft hand. Essays average around ten pages and range in form from traditional to alternative, such as the opening essay, a listicle entitled, “What Pain Wants.” Another essay, “From Inside the Egg,” is a lyric, sectional essay that contains prose poetry and poetry. Even in this academically-trained work, in other words, high-literary writing, there is beauty and a lesson.

“IV. ‘Normal’ for me and Re-centering, yolk as the level ‘Normal’ in my case may mean not having to fight to hide the symptoms of excruciating or annoying physical or mental pain. Yet a survey from 2012 found that 47 percent of adults in the United States carry some form of chronic physical pain.” The mixed structures of the contents of this book make it even more significant, and the sequencing of the essays is choice, though the design aesthetics are a bit lackluster.

Huber is an activist—two of her other titles are Cover Me: A Health Insurance Memoir and The Evolution of Hillary Rodham Clinton. That activism occasionally peeks its head into these essays, too. In fact, she puts the American healthcare system under the microscope. “I can’t be denied insurance for a pre-existing condition under the Affordable Care Act, but new methods of discrimination are always being hatched.” She removes the deific mask we’ve given to doctors and reveals how their fears and egos can negatively affect an individual patient’s care. In an essay like “The Cough Drop and the Puzzle from Modernity,” she sheds a little light on the American tendency to think everyone should be happy all the time, and if happiness is missing, something is drastically wrong, which often leads to believing in the marketing of over-the-counter drugs, the proliferation of which has altered our perception of pain. She also uses language about failure as a worker, her inner “Mean-Boss” that forces her to put on a fake smile and pretend not to hurt so she doesn’t make colleagues or other people in her life uncomfortable. “I have been a labor activist since college, yet I am my own worst nightmare as my internal boss.”

One of the most rewarding essays of the book is “The Status of Pain.” It’s in this essay that Americans get a rather less-than-glorious reflection of themselves as happiness seekers and as social media users. In it she discusses the extreme to which she tries to tread lightly on social media like Facebook, because people cringe when she mentions her pain on it. One post about pain, and people in real life think of her social media as a “Wailing Wall,” she intimates, saying that people who haven’t experienced systemic, incurable, constant pain find the subject too depressing to deal with and therefore turn it off. “I read the winces in the emoticons,” she writes, going so far as to review her posts for an entire year to determine she has posted a whole two times about her own pain.

The irony here, a reader might find, is that we allow our friends to repeatedly post about their ailing dog, cat, or iguana. Yet there seems to be an unspoken, socially-agreed-upon allotment of one post per dying person, such as your grandmother or sibling, and perhaps one about you. Usually, those posts about your own pain, as Huber says, should contain some kernel of humor.