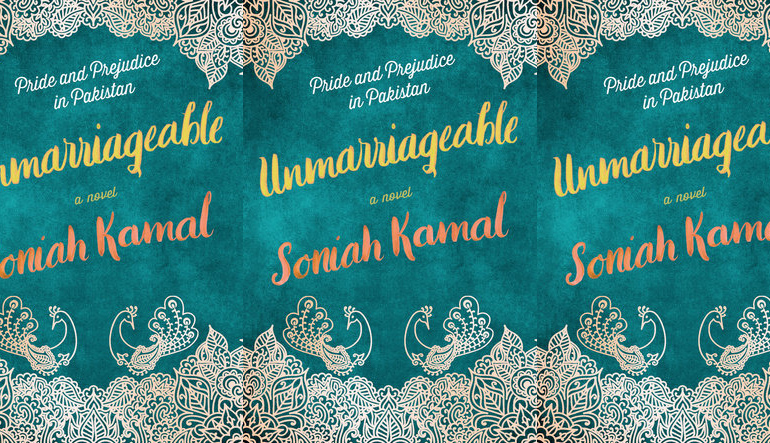 Set in Pakistan in the year 2000, Soniah Kamal’s Unmarriageable is a faithful retelling of Austen’s Pride and Prejudice—down to the naming of its characters. The Pakistani Binats are the new Bennetts; Alys is the new Lizzie, and Darsee the new Darcy. The plot, too, hews pointedly close to the Austenian original. But even as Kamal consciously retraces the storylines of Pride and Prejudice, she explores new thematic terrain, as defined in her novel’s two epigraphs.

The first epigraph is a quote from an 1813 letter Jane Austen wrote to her sister, Cassandra. In the letter, Austen worries Pride and Prejudice, published that same year, is “rather too light, and bright, and sparkling.” She confided to her sister her concern that her novel did not contain enough “shade” and thought it wanted to be “stretched out here and there with a long chapter of sense, if it could be had.”

I have never found one among them (Orientalists) who could deny that a single shelf of good European library was worth the whole native literature of India and Arabia…We must at present do our best to form a class who may be interpreters between us and the millions whom we govern—a class of persons Indian in blood and color, but English in tastes, in opinions, in morals, and in intellect. To that class we may leave it to refine the vernacular dialects of the country.

And so Kamal opens her narrative with these two guiding posts in sight: Austen’s self-doubt about the “playfulness” of her writing, and an acknowledgment of the deep social scars of the British occupation of India and Pakistan.

The novel itself begins with Alys, a thirty-year-old English teacher at an all-girls high school, asking her students to re-imagine Austen’s famous opening line:

It is a truth universally acknowledged, that a single man in possession of a good fortune, must be in want of a wife.

It is a truth universally acknowledged that a girl can go from pauper to princess or princess to pauper in the mere seconds it takes for her to accept a proposal.

In this scene, Kamal underscores that Unmarriageable exists outside and beyond the world of Pride and Prejudice. Alys’ ninth-grade students even discuss Colin Firth’s wet shirt scene in the BBC 1995 adaptation of the novel. In placing her narrative at critical distance from Pride and Prejudice, Kamal also simultaneously underscores that many of the conventions that made the 1813 plot plausible persist in Pakistan in the year 2000.

The opening chapters of Unmarriageable focus on an opulent wedding that draws the country’s aristocracy together for a series of traditional wedding parties. In describing a sumptuous Pakistani wedding culture, Kamal centers marriage as a traditionally feminized preoccupation, simultaneously celebrating it and problematizing it. The frothy, vibrant descriptions of the luxurious Nadir-Fiede wedding dance off the page and feel ripe for cinematic adaptation, but Kamal also uses the various Nadir-Fiede wedding events as entry points to a generous, richly-layered comedy of manners.

All of the women in Unmarriageable grapple with the concept of marriage. Like the Bennett sisters, the Binat sisters have a mother whose life purpose is to see her daughters marry well in order to ensure financial stability. The sharp-eyed Pinkie Binat isn’t seeking matches for her daughters among the heirs of aristocratic families, though; she’s looking at the moneyed families helming profitable companies, such as Rani Raja Steels, the British School Group, Sundiful Fertilizers, Pappu Chemicals, Nangarbat Textiles.

The reader sees further Austenian echoes in the plights of the five Binat daughters. Thirty-two-year-old Jena, the fair-skinned and conventionally beautiful eldest, is bound by social norms and cannot show her interest in Fahad Bingla (nicknamed “Bungles”). Alys is so opposed to husband-hunting that Mrs. Binat asks her sister Jena to swear on a Quran that Alys is not a lesbian. The two eldest Binat sisters are described by the narrator as “certified Miss Havishams. Actually, Alys and Jena were considered even worse off, for they had not enjoyed Miss Havisham’s good luck of having been at least once engaged.” Restless Mari is told that she cannot play sports because “no one [would want] to marry a mannish sportswoman” and fixates on studying the Quran instead. Qitty is the constant target of fat jokes while the free-spirited youngest daughter, Lady, is, like her Austenian analog, Lydia, the target of constant reprimands. As a single woman in her forties, Alys’ best friend, Sherry, is forced to perform cooking and hostess auditions for prospective suitors. She remains frank, however, about her desire to marry well so that she can better her family’s prospects—and have socially sanctioned sex.

As the novel unfolds, Kamal explores ingrained cultural norms around colorism, ageism, and body image. Mrs. Binat wishes more than once that Alys “wouldn’t insist on ruining her complexion by sitting in the sun,” and a man who proposes to Alys thinks to himself that she is “a little on the dusky side.” Qitty grapples with body-shaming throughout the novel, including a proposal that includes the caveat: “if you lose fifty pounds and promise to maintain the weight loss forever.”

As Kamal deftly explores the social norms around weddings and marriage in Pakistan, she also considers contextual history and culture. The central weddings in the book feature the sumptuous blend of local and Western finery accessible to an elite equally at home in Pakistan, Paris, and New York. Mari’s strict adherence to Islamic beliefs—she begins wearing a burqa at the end of the novel—is a sharp contrast to the extended family’s more relaxed religiosity, which includes both Christian and Muslim celebrations. Alys speaks English and Sherry is a literary translator who prefers Urdu.

In her local graveyard, Alys observes in one visit that some of the graves bear English names and sees in another “the grave of a Pakistani soldier who at the time of his death in World War II had been an Indian solider; geography had converted his citizenship from one country during life to another after death.” Kamal also consciously embeds cultural landmarks in her narrative, setting a key conversation between Alys and Wickaam in a Pakistani-India closing-of-the-border-gates ceremony in the Pakistani border village of Wagah, where the spectators are segregated by gender.

Ultimately, it is in history, literature, and language that Alys and Darsee find common ground. They exchange books, like Attia Hosain’s Sunlight on a Broken Column, and talk of an anxiety that haunts them both: the desire to “locate a Pakistani identity inclusive of an English-speaking tongue.” In an early conversation between Alys and Darsee, Kamal confronts the Macaulay epigraph head-on. An uneasy conversation feels like a meta-exploration the novel in which it takes place, particularly when Darsee says: “At the wedding, you talked of a Pakistani Jane Austen. But will we ever hear the English or Americans talk of an equivalent?” But Kamal is less interested about what is exported for Western approval and more interested in writing for Pakistani readers a narrative that embraces the full span of the country’s history, including English-language works. As Alys says:

A book and an author can belong to more than one country or culture. English came with the colonizers, but its literature is part of our heritage too, as is pre-partition writing.

In taking pains to detail both the glittering weddings and the modern questions that lie, unanswered, beneath those elite celebrations, Kamal strives to show us a complicated social status. In their conversations and courtship, Alys and Darsee accept the painful history and language of colonization as one part of Pakistan’s heritage, a story to be challenged, cherished as one’s own, and retold.