Home
»
Critical Essays
»
Speaking for Everyone, Speaking for No One: The Question of (APIA) Canonicity 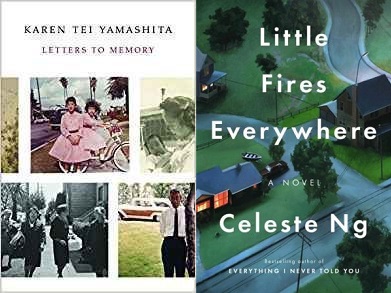 The Western canon has no objective nomination process, which is why it is both axiomatic and controversial. Literature written by (and often for) white writers is still treated as classic, crucial, and central to our literary archive, codifying a clear but tacit anglonormativity. But why have APIA voices been erased from the so-called “Great Books” for so long, and how should APIA writers respond to this longstanding erasure? Should APIA writers fight to make the Western canon more inclusive, more multicultural, and more multiethnic? Should APIA writers resist and deconstruct the Western canon (formed by literary scholars and calcified within academia)? Should APIA writers create their own canon and recenter their own cultural narratives, or should they subvert the politics of canonicity altogether? These are some of the burning questions and deeper issues at stake in this dual interview with Karen Tei Yamashita (Scintillations, September 2017) and Celeste Ng (Little Fires Everywhere, September 2017).

Jackson Bliss: Even though APIA literature isn’t homogeneous, and even though APIA fiction in particular has a natural polyvocality to it, do you get the sense that an APIA canon is forming (or has already formed) within academia?  Based on the long-standing relationship between APIA writing and racial/social/political activism, is this cause for concern?

Karen Tei Yamashita: Many years ago, I devised and taught a class called “Asian American Literature: canon/not canon.” Every week we read two books, one considered (I thought) in the Asian American canon and the other not. So there were twenty books in one quarter. The students only had to choose one of the books each week, but the TAs had to be prepared to talk about both. I conceived of this class because I realized that I never taught what I considered to be the Asian American canon, but I realized also that the students had no idea about those old standbys that I had been assuming they’d read somewhere sometime (but had not), and after all they should probably have a sense of the history of this literature. So, while I think the canon is constantly changing, there has been a list of books, call them canonical if you want, that have been taught as established by Asian American teachers of the literature. I taught this class in 2007, and on the canon side, there was Bulosan, Cha, Chan, Chin, Chu, Hagedorn, Hayslip, Hongo, Hwang, Kingston, Mukherjee, and Okada. I think the exercise for me was instructive, that even though we push against a canon, it is foundational in ways I respect. And there were surprises, I think.  For example, the students were surprised that Theresa HK Cha’s Dictee was in the canon. Their expectation was that the canon was traditional, not experimental. I am not against or for a canon, but it is significant that a canon, if it exists, keeps books in print because they are taught again and again.

Celeste Ng: I’m not sure if “canon” is the word I’d use here, because I’ve always been wary of that concept, but I do think certain texts are touchstones for many APIA writers—either for historical or aesthetic reasons—and that makes them useful reference points. Maybe a better way to look at these pieces is as seminal works that can provide useful context in interpreting other works, as well as in creating new works? This is a little out of my depth, because as a writer, I have to take my critic hat off and stick it in the closet; in my own experience, thinking like a critic while writing is usually fastest way to kill the piece. But regardless, if we look at a broad range of texts—because APIA lit is multifaceted—and we look at them as context rather than prescribed models—it doesn’t have to be harmful; hopefully, being acquainted with these texts will enrich both APIA lit and the study of it.

JB: How do APIA writers avoid racial pigeonholing by the publishing industry? Do you have any experiences about this you care to share?

CN: This is difficult, because what we’re talking about here is marketing, and that’s something most writers don’t think about when writing, nor do they often have control over it. The first thing to remember is that there’s a difference between choosing to speak about racial and cultural issues, and being pigeonholed. In the first, you have agency, and it doesn’t have to be your only identity. In the second, the role is imposed upon you, and you’re confined to that role. So pigeonholing doesn’t mean you can never talk about race—yet that’s often the route many writers take: “I don’t want to be pigeonholed, so I’m not going to discuss race at all.”

But it’s definitely true that publishing, intentionally or not, tends to pack APIA writers—and most marginalized groups—into their own little boxes. For me, it was important to work with people who got my work and truly understood the industry problem. My agent is and has been committed to voices and books that tackle issues of race and identity; this is also a personal issue for her. My editor and publisher work on a lot of books with a global and social perspective, especially nonfiction, which I think helped them look at my books as both about race and about universal issues—exactly how I see it. My publicist is a woman of color, and is (I feel) personally aware of how to talk about race issues in my novels without making them only about race.

With all that said, writers—and emerging writers especially—don’t always have a lot of choice in who to work with, or how their work is presented. Or at least, they feel they don’t. But it’s okay, and maybe even necessary, to push back when you feel yourself being boxed in, to say, “I’m not sure if you realize, but . . .” and explain what the problem is. Changing mindsets is a long-term project, and the only way to do it is by calling attention to the issue and continuing to talk about it.

KTY: The stereotypes we invent for ourselves. But I wouldn’t say my soul has ever been killed.

CN: I’m most sensitive to the East Asian stereotypes, especially about women—because that’s my own background, so they’re the ones that I’ve encountered most often and the ones that hit closest to home: the delicate, submissive (East) Asian girl, the dragon lady, the “Tiger Mom.” I mean, I could go on and on. But rather than catalog the stereotypes themselves, I’d rather focus on the insidious ways these stereotypes are expressed: the coworker who told me—as a compliment!—that I was intimidating, because I wasn’t afraid to speak my mind, like most Asian women were. The people who, when they hear my son is good at math and piano, wink at me and say, “Tiger mom!” (Actually, no. He taught himself to multiply and plays piano for fun; I’m probably the only mom who’s ever said “Can we please take a break from math?”)

My point here is that even when people are aware of these stereotypes, they often aren’t aware that they’re perpetuating them. I’ve had to explain, for example, why it’s not okay that the Chinese Barbie comes with a panda, or the Indian Barbie comes with a “monkey friend.” Why it’s offensive when someone, on seeing my Asian face, says, “Ni hao!” and expects praise. What my problem with the Asian character on “Unbreakable Kimmy Schmidt” is. Why articles like “Is it ramen or pho? Here’s how to tell” frustrate me. So it’s less the specific stereotypes that trouble me, but the extent to which they’ve pervaded American culture—so deeply that we don’t even realize we’re repeating them.

JB: How do APIA writers challenge, push back on, and deconstruct APIA stereotypes (within the publishing industry, the public imagination, and even within our own communities)?

CN: I wish I knew. The best answer I have, again, goes back to Chimamanda Adichie’s concept of the “single story.” The more APIA voices are out there, talking about these issues and our various (and diverse) identities, the clearer it will be that we are not a homogenous group, and that there are different experiences and opinions even with the APIA community. Which, as I type it, is a “Well, duh,” concept, but that’s exactly the point of the single story, isn’t it?

One concrete thing APIA writers—and everyone else, for that matter—can do is to actively read and promote APIA voices that are different from their own, to think of us as on the same side even as our experiences and goals may differ. I’m trying to do this myself. I don’t know enough about the dynamics of Southeast Asia, for example, to even try to speak about it—but I want those stories to be out there, and I see their successes as a crucial part of APIA success. When one group makes progress, we all do. I try to remind myself and others that the experience of East Asians is often very different from that of SE and South Asians, and that the experience of Chinese Americans is different in many ways from Japanese Americans and Korean Americans, AND that the experiences of Chinese Americans have lots of variation, too—when your family came over, from where, which language they speak. On and on.

Read books by other APIA writers whose experiences are different from yours; talk them up; reach out to them and laud their successes publicly. Recognizing and valuing the differences in our own big-umbrella group—as well as the common experiences and hurdles we face—both of those things are necessary at the same time.

JB: What are three APIA books that have rocked your world and inspired you?

KTY: I tend to think about the broader picture, the breadth and substance of a body of work; that said, I would say the work of Chang-rae Lee, Jessica Hagedorn, Garrett Hongo, Linh Dinh, R. Zamora Linmark. Sesshu Foster, Viet Thanh Nguyen, to name a few.

CN: In no particular order: Li-Young Lee’s Rose, Maxine Hong Kingston’s The Woman Warrior, and Jade Snow Wong’s Fifth Chinese Daughter. There are many others, but those three hit close to home for me.