Home
»
Reading
»
Speaking of Megaphones: Why Reading Literature Now Might Be Useful 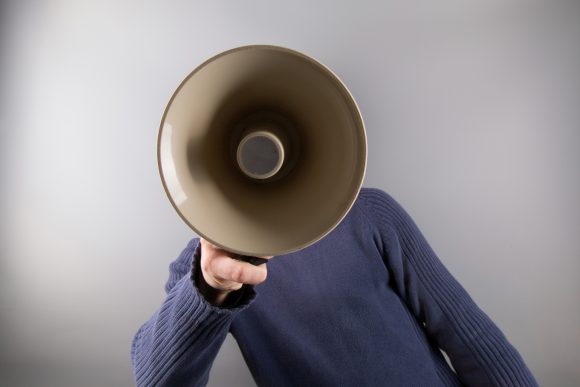 Recently I began a reading series at the library of my small city, Burlington, Vermont, titled Short Story Megaphone. The idea is stubbornly simple: each week an acclaimed piece of short fiction is read aloud. Anyone can sit and listen. Some bring their knitting. We meet on the second floor, above the children’s wing, in a carpeted echoey room with an electric stove and roller-wheel podium and rows of chairs set out as if the writer whose work we’re celebrating is actually present. With the balcony view of children’s books and plush animals it would all feel a bit childish, I think, were it not for those other echoes of Deborah Treisman’s fiction podcast, of Garrison Keillor’s The Writer’s Almanac. It is childish, I worry, sometimes. It is childish to escape into art when a hateful, cruel, impossibly forceful language sweeps under the doorsills, billows the curtains, its armies amassing on the stoops of much-loved neighbors.

I could spin many narratives for why I wanted this series. Instead I’ll be honest with you: it was mostly for my own sanity. Maybe you’ve got a better handle on this than I do, but my way of engaging with our daily media (especially during an election—especially during this last election) does not feel particularly healthy, or intentional, or useful. In part the feel is that of some distorted Skinner Box—stripped of researcher, of experiment, leaving only the frantic rat alone in its chamber, pressing desperately at the lever that somehow, at some time, seemed to promise the release of food. (Until the tablet and smartphone this quote-unquote lever was of course the mouse, on which we did not press but clicked. But here the metaphor becomes perhaps too base and obvious to be effective.) What this looked like on the ground was me waking up to check the news, and in doing so disrupting any possibility of sustained and focused engagement with what we call literature. This mind’s desire, it turns out, for complexity, for delicacy, for the paced and hard-won honesty of poetry and fiction, is a fragile, quiet thing. “A multitude of causes,” writes Wordsworth, in his 1802 “Preface to Lyrical Ballads,” “unknown to former times, are now acting with a combined force to blunt the discriminating powers of the mind, and, unfitting it for all voluntary exertion, to reduce it to a state of almost savage torpor.” One would hope that after two-hundred years of more literature we wouldn’t be so easily pegged:

“The most effective of these causes are the great national events which are daily taking place, and the increasing accumulation of men in cities, where the uniformity of their occupations produces a craving for extraordinary incident, which the rapid communication of intelligence hourly gratifies.”

The title for the series, I should mention, takes inspiration from “The Braindead Megaphone,” an essay by George Saunders that I believe Wordsworth would have loved for its plainsong and concern with the disrupting power of our media.

Imagine a party, writes Saunders. The guests are all normal party guests. They have been around the block. They’ve suffered, they’ve lived, they have nuanced ideas concerning how things work. They talk and share and listen to one another, make jokes, test their observations, all until a man with a megaphone walks in. “He’s not the smartest,” writes Saunders, “or the most experienced, or the most articulate.” What distinguishes him though is his dominance. If he says he loves mornings in spring, the partygoers, only a few, start to discuss mornings in spring. If he “weaves into his arguments the assumption that the west side of the room is preferable to the east, a slow westward drift will begin.” Some of the partygoers agree with him, some disagree, but they all listen: “It would be hard not to. It is only polite.” Soon those earlier nuanced conversations have dried up. Each is only concerned now with what Megaphone Guy is saying, or how he’s saying it, or what the implications are.

“He has, in effect, put an intelligence-ceiling on the party.”

What does a healthy relationship to media look like? For let’s be honest: if there’s such thing as communal literature in this country—a form of communication, however flimsy, of learning and sharing knowledge in which most of our people engage—mass media, though not our most beautiful, or insightful, or artful form, is the one really binding us together. On a personal level, as a fiction writer, I hate to admit this. But when I drive from Vermont to Boston, or down to NYC, and then fly to Idaho and Washington state where I was raised, the one conversation that I know will transcend the boundaries of rural and urban, of east and west, of my generation and those before me, doesn’t concern certain works of art, or shared religious exploration, or experiences of the workplace, or even the same movies or TV shows or music. There’s pre-megaphone conversation, about the small nuanced intricacies of our complex lives, and then the flat recitation of what’s on the news and what we think of it.

Of course quality news reportage—with its cool presentation of facts; its attempt to offer glimpse into experiences outside our own; its aim to drag to the light the immoral, the unjust, in order that we might change it—is incredibly useful in a culture where corporate actions sing secret in the air, where decisions about military action and individual rights and environmental regulations are often only as public as the megaphone chooses to make them. But as we’ve seen recently, often our media fails us—or we fail it, failing to honor any ideal expression of what should count as news. Personally I am quite bad at measuring these distinctions. I am a creature, desiring change, that works best in habit. I click on the things that terrify me the most, that surge the most adrenaline. A people responding and reacting out of anxiety and fear are perhaps as unlikely to engage in useful, revealing conversation as they’re likely to pick up a novel and grow into its honesty and nuance and kindness.

“Of course I hate it that poets are not part of a larger conversation,” said C. D. Wright. She was being interviewed by PEN America in 2012. “But I would qualify by saying I am not very convinced there is a real conversation going on in any expansive, thoughtful sense of the term.”

Is it dangerous, even childish, to disengage from media in a time of crisis, when we must, for the sake of democracy, stay informed? But if we’re to agree with Wright—which, after weeks of replacing news articles with short fiction I think I have to—is it dangerous to pretend that the conversation can be found in a headline, in a social media news post, through the worried clicking and skimming of hasty articles?

The megaphone, I believe, deserves to be given back, at least in part, to the art our best writers work so hard at.