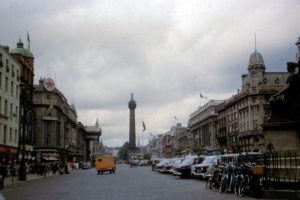 Dorothy Nelson’s In Night’s City is a sticky, heady book that the reader trips and wades through. Told from the perspective of Sara, her mother Esther, and finally Sara’s alter ego Maggie, the novel details the particular sexual peril produced by modern Catholic Ireland between the years 1958-1970 (modern Ireland as distinct from Ireland under English rule). Several cultural factors combine to make Ireland a particularly hazardous place for girls and women; the conflation of female bodies with reclaimed post-colonial land whose boundaries must from now on prove impermeable, women’s renewed role as paragons of virtue that embody nationalistic values and let these standards slip at their own risk. What proves most corrosive to female consciousness over the course of the book, however, is the suffusion of feminine flesh with insidious, spiritual shame. This is what sees Esther and Sara experience not only sexual violence but gender itself as a crisis of flesh, religion, ideology, and selfhood.

Published in 1982, the book calls loudest to Eimear McBride’s A Girl is a Half-formed Thing,  published 31 years later in 2013. Each novel poses the inner life of a girl sexually abused within her family home and problematises the belief systems that allow such violations to occur in plain, domestic sight: girls’ bodies are vessels for male pleasure, penetration and procreation is implicit to their biological destiny.

In each instance, the prose buckles and implodes in time to its charged content, ultimately becoming an extrusion of that content. However, while McBride’s prose adheres strictly to corporeal experience, going deeper and deeper into the body in times of trauma, Nelson’s Sara responds to her suffering by escaping the immediacy of flesh. Indeed, from its opening pages, In Night’s City establishes that four year old Sara’s psychic life has long been governed by stark, repressive tactics. Abused by her father in the middle of the night, she appeals to her mother, who continually denies the blood on the sheets: ‘I pushed the covers down and showed her the red blood. “’Look at that,’ I said. ‘It was a dream’, she said.”

With this visceral evidence deftly swept aside, Sara’s child mind attempts to assimilate the abuse, a frequent occurrence that results in Maggie. Lying somewhere between imago and imaginary friend, Maggie endures the rape but also subsumes the manic rage Sara cannot safely express:

I was laughin’ into his colours. Then it was dark. I felt the Dark touchin’ me funny an’ I was cryin’ so Maggie came an’ he touched Maggie funny not me. Not me. Not me.

When she was gone I switched on the light again to look at the blood. “Look at it, Maggie,” […] Maggie came to have a look an’ she started laughin’ mad an’ then I laughed too. I kept pointing at the red blood and laughin’ my head off.

Later, after Sara has become pregnant and given birth to her father’s son, we see the toll the constant denial takes on both mother and daughter:

Grandma came to look after us an’ Mammy took to the bed […] Her face sunken in like a rotten apple. The room was cryin’ but you couldn’t see the wet because her eyes were cryin’ but the wet wouldn’t come.

The surreal, unhinged quality produced is in keeping with a consciousness obliged view its own workings from off stage. As a traumatised child and adolescent, Sara is forever looking “around” and “away from,” and what she finds in the wings is what Roberta Wondrich has described as a fusion of graphic intensity and “visionary, hallucinatory transfiguring’ imagery.” Perhaps most powerfully, the intensity of her transfiguring gaze sees her father dissolve into abstraction, his body metamorphosing into a series of signifiers for assault: “Cause the night is a secret ‘an the Big Dark was whisperin’ over the bones an kept shakin’ them. The snake was standin’ up an’ Maggie’s eyes were lights, only black lights, but she could see an’ I couldn’t.” Even years later, now cusping on womanhood, Sara reflects “When Ma told me he was dead I didn’t think ‘Father you are’ but, ‘Sweat and breath you are’. Not ‘Father you are’ but, ‘Sweat and breath mingling with my own you are.”

Sara’s own body is also expressed in emphatically process-based imagery, as determinedly unwieldy and shameful, overripe and wet: “I kept thinkin’ O I have real like breasts like two juicy apples by then I was sweatin’ like a pig […] o god the Mediterranean ocean was pourin’ out of me armpits […]” When Esther recalls having sex with her husband, there is a similar distaste for moisture and secretion: “Sullied nights I called them. When I lay beside him listening to the sugary words and the greasy slick voice, ‘sullied, sullied,’ swung back and forth in my head. Grease and sugar, resonant of congealed moisture, coupled with the sneering assonance of “sullied”, again underscoring a profound sense of discomfort with the body and its base functions. Akin to Carmen Machado, whose stories so effectively render violation as a constant in women’s lives, Esther and Sara are submerged in Catholic notions of purity and lapsarian guilt, notions which present their femininity and the particulars of the female body–rather than the motivations of an abuser supported by a vast network of ideological reinforcement–as the root source of their trauma.

In Night’s City carries this poisonous misconception to its painful conclusion, namely a status quo in which women believe not only that their spiritual stock is compromised by the acts of an aggressor, but that their very flesh is indelibly entwined with suffering–is predestined to suffer. What this looks like, ultimately, is Esther’s assertion that “motherhood cut through me like a knife,” and Sara’s desperate, ongoing refrain “I don’t hate being a woman. I don’t. I don’t.”