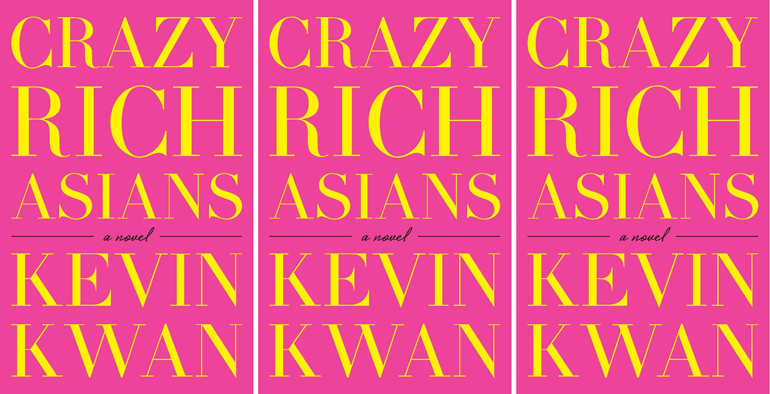 My destination was a pub in Mayfair, in London’s hyperaffluent West End, one of the richest neighborhoods in the world. The feeling I didn’t belong snuck up and hit all at once as I rounded the corner and stepped into a secluded, residential area, the streets lined with Bentley and Aston Martin coups and the occasional slumming Range Rover. Having spent much of the afternoon walking hot and crowded streets, the prevailing feeling as I beheld this oasis was less shock than incredulity, the reluctant processing of what all this must cost in a city that sells 170-square-foot “dog kennel” studio flats for £180,000 in Barnet. In short order my reluctance turned to alacrity as I circled the expensive cars, peering through their windows at the interior, and gawked up at the spacious flats from my well-appointed sidewalk.

There’s a moment like this—at least I imagine it like this—in Kevin Kwan’s addictive and subtly hilarious Crazy Rich Asians (2013), a novel that follows the lives of a few unfathomably rich Singaporean families, sometimes from the perspective of Rachel, a Chinese-American from much humbler circumstances. As the car pulls up to Tyersall Park, a vast, secluded estate and English garden in the middle of bustling Singapore, Rachel’s wealthy Singaporean friend Peik Lin, whose family are real estate developers, turns to Rachel and says, “I’ve never seen a place like this in all of Singapore. It doesn’t even feel like we’re in Singapore anymore.”

Kwan writes Crazy Rich Asians with compelling command of the vernacular of high-end designer brands and luxury experiences. Even if he’s bullshitting, he’s fooling me deliciously, along with, I assume, the vast majority of readers who also wouldn’t know which Patek Philippe is the most exclusive one or which Alexander McQueen dresses are in season. But Crazy Rich Asians works on a more sophisticated register than simply wowing the non-rich with designer name-dropping and things described as “sumptuous.” Hot pink cover notwithstanding, this is not the novel version of the Sex and the City film franchise (though a Crazy Rich Asians film is currently in the works).

Kwan offers us a window into a world of wealth capable of altering the very ontological condition of the characters who enjoy it. An Asian family getting the brush-off at a posh London hotel makes a few phone calls and buys the hotel before sending the racist manager packing. Later in the novel, when the groom can’t get a good Australian flat white at his over-the-top bachelor party on a yacht, the best man constructs an ingenious plan to salvage the occasion, arranging for a chartered helicopter to pluck them off the yacht and fly them to Australia posthaste. Like Rachel and Peik Lin pulling up to Tyersall Park, the most profound impact of the wealth on display in Kwan’s novel is how it resets and expands our impressions of which realities are possible.

Possible for whom is the obvious question here, but the point is that reading Crazy Rich Asians and becoming implicated in the kind of wealth voyeurism it engenders has a way of temporarily overtaking our value systems and re-focusing them on the material. Here I mean not just “material” in the colloquial sense—materialistic, superficial—but in the literal sense as well: for all the brand naming, Kwan’s novel is most intoxicating when it reproduces the exclusive experience as a sensory experience, as if we’re smelling the rare orchids and touching the fluffy scones (if Kwan isn’t working with a virtual reality company, he might consider).

I know extreme wealth disparity is not only an economic problem but a human rights problem as well, one that fundamentally threatens the existence of those on the wrong end of the extreme. Yet the experience of reading about extreme wealth, of peering through the Bentley window, has an addictive quality. The cliché is that we want to know how those “on the other side of the tracks” are living. And in 2017 it’s a potentially dangerous cliché, given the enabling role of wealth voyeurism in the creation of Donald Trump’s celebrity. Crazy Rich Asians is a fun and indulgent read, and is largely treated as such; but in its darker moments—a brutal dogfighting scene in Macau, a bloody fish placed in Rachel’s purse as a cruel and classist prank, a gut-wrenching infidelity subplot—it reminds us that watching the rich might also mean witnessing the fallout of extreme inequality, and of value systems in which money is morality and payment is precept.

When I reach this dimly lit crossroads while reading and delighting in Crazy Rich Asians, I’m reminded of Daniel Defoe’s Moll Flanders (1722), a story of a London prostitute, born in a prison, who sleeps, schemes, and thieves her way into fortune (if not fame, more like infamy). In his austere way—which is to say, with calculatedly less panache than Kwan—Defoe employs a clever narrative strategy that anticipates the luxe-voyeurism genre Kwan has mastered. Because Moll’s is an improbable story of upward mobility in late seventeenth century London, Defoe offers recurring financial checkpoints in the novel that tell us how much money Moll has in store.

As Moll takes stock of her growing fortune—punctuated by dramatic moments of monetary loss and windfall gains—we invest ourselves in her aspirational moves. It becomes easy to forget that Moll is cheating people out of their money, until darker reflections puncture the veneer of victimless crime. At one point Moll confesses she thought of murdering a child whose necklace she stole—to eliminate the sole potential witness of her theft—but remorsefully backs off that notion. I find myself cheering Moll’s savvy upward mobility—she’s usually stealing from the rich, after all—until Defoe brings us back to the novel’s weightier realities, the socioeconomic circumstances that forced Moll to survive, then to thrive, by predation.

I suspect that when we spy on the rich through voyeuristic reading experiences, the pleasure and allure come largely from imagining ourselves in their Balenciagas. But we should read with care not to overlook the darker moments in voyeuristic “romps” like Crazy Rich Asians, the moments that put us back in place.