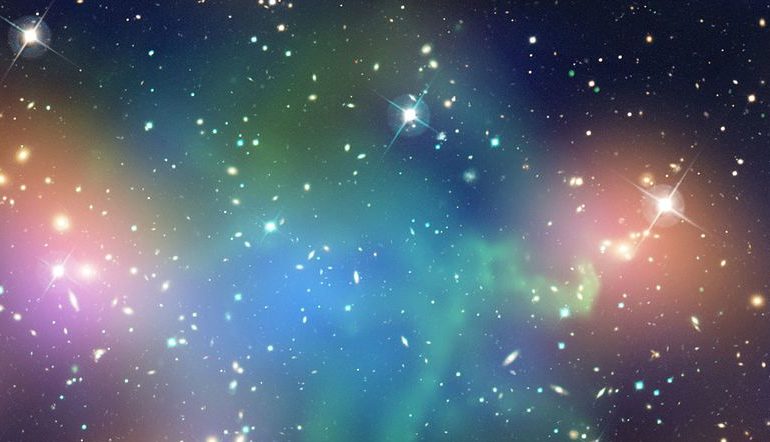 Science relies on metaphors. The work that metaphors do, after all, is to either make the familiar strange, or to make the strange familiar. Science is full of strangenesses, difficult for most of us to grasp unless we have something more quotidian to compare it to. Space, in particular, makes us feel the necessity of these analogies—it’s simply too vast, too outside the realm of human’s concrete experience to make much sense without them. My six-year-old son, obsessed with planets, is an expert on these comparisons. If Jupiter were the size of a watermelon, he informs me, then Earth would be the size of a cherry tomato.

Before my son was born I wasn’t much interested in space, but once his obsession kicked off, it became apparent to me that space and poetry were somehow kin, both pushing up right against what is unsayable, beyond language’s ability to capture. Metaphor is one of the tools we use to navigate that unsayability, but not the only one. After I realized this, I wrote a poem about space. Then another. Then another.

To see how other poets approached writing about the universe, I turned to Tracy K. Smith, whose book Life on Mars, blends a kind of sci-fi lens through which to view the future, and looks at the past, after the loss of her father, a scientist who worked on the Hubble Space Telescope. In her poem, “My God, It’s Full of Stars” (a line from the movie 2001) Smith begins by acknowledging how we cope with the essential unknowability of space: “We like to think of it as parallel to what we know, / Only bigger.” Mostly, she admits, our point of reference seems to be movies: the speaker imagines a conversation with Charlton Heston (whose movie career frequently found him in sci-fi scenarios) and she devotes a section of the poem to 2001, “When Dave is whisked into the center of space, / Which unfurls in an aurora of orgasmic light / Before opening wide, like a jungle orchid / For a love-struck bee.”

Sometimes, what I see is a library in a rural community.

All the tall shelves in the big open room. And the pencils

In a cup at Circulation, gnawed on by the entire population.

The books have lived here all along, belonging

Of family names, speaking (at night mostly) to a face,

A pair of eyes. The most remarkable lies.

This isn’t an easy metaphor to perfectly parse, but it somehow also makes a kind of visceral sense: if the books are stars, or planets, or galaxies, then we glimpse them imperfectly, belonging equally to everyone and no one, their “lies” making them essentially unknowable even as we are experiencing them.

In her poem, “Diffraction,” written for her friend Carl Sagan, Diane Ackerman, like Tracy K. Smith, also makes the essential unknowability of space part of the poem’s subject matter. Ackerman says that she envies her friend’s ability to so fluently speak the language of math and science, to know the precise terms behind why the sky appears blue, for example. Whereas for Sagan, it’s Rayleigh scattering that “makes blue light, canting off molecular // grit go slowgait through the airy jell,” Ackerman admits that she sees the world not as a scientist or mathematician, but as a “doting consciousness.” To illustrate how far she feels from Sagan’s technical precision, Ackerman moves us from densely virtuosic language to a place almost past language:

by the ricochet wonder of it all: the plain

everythingness of everything, in cahoots

That repeated phrase, “the everythingness of everything” is as close to inarticulateness that poems can likely come—it’s capturing vastness and speechlessness in speech. But where Smith’s poem ends on an ominous note (she describes space finally as “so brutal and alive,” that it seems to stare back at the Hubble Telescope capturing its image), Ackerman is finally unafraid of what she sees as she stares into the unknown: “I only know, one rural twilight … / my ribcage sprang open like calipers, and, / in their widening compass, nothing lacked.”

Ackerman’s poem was collected into a volume called The Planets: A Cosmic Pastoral, written when Ackerman was earning her PhD at Cornell, where Carl Sagan taught. He served as the book’s technical advisor. I love the idea of Sagan consulting with Ackerman on the poems, love that he apparently sent them to Timothy Leary in prison, love his own obvious admiration of poetry. Reading Smith and Ackerman, finding my way through my own star-strewn poetry, reminds me how often astrophysicists and poets occupy the same role, breathlessly searching in the dark for new images, new perspectives, trying to grapple with nothing less than the terror and wonder of an entire cosmos.