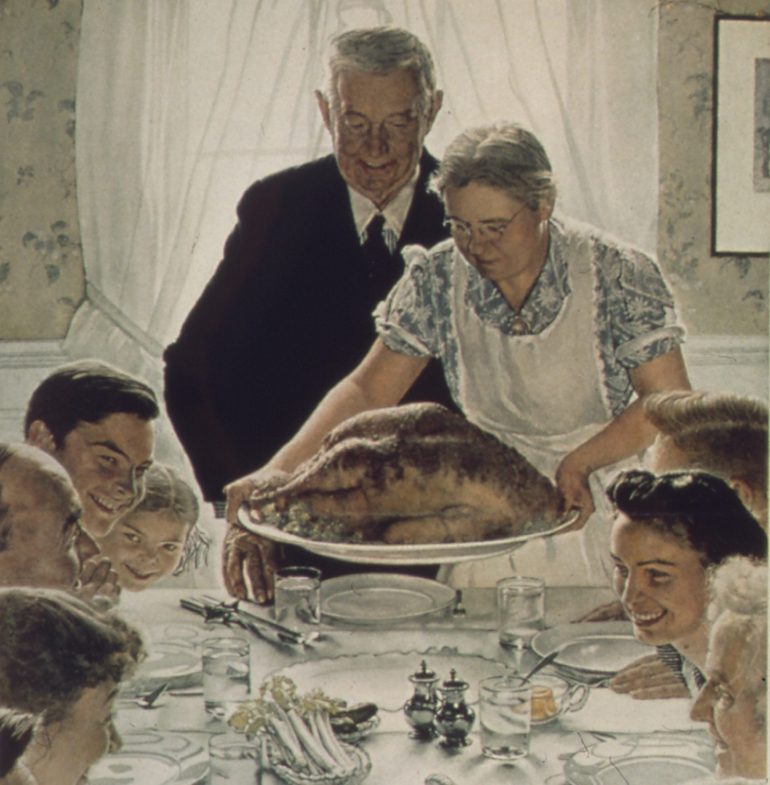 For many people, this was a year of severing toxic relationships. What does it mean to love someone who refuses to communicate? To love a person who hurts you? Lori Ostlund’s Flannery O’Connor Award-winning collection The Bigness of the World takes a look at communication (and miscommunication) in numerous ways: between siblings, between lovers, between parent and child. I’ve read it maybe a half dozen times, but this holiday season it feels especially poignant. In “Talking Fowl with my Father,” Ostlund assesses emotional intimacy through the lens of food. The protagonist recounts experiences she’s had with her father in three sections, detailing intimacy roadblocks through different types of bird: turkey, chicken, pheasant. In Ostlund’s work, the emptiness of the stomach becomes an emptiness of the heart.

My father wants to know what I had for lunch today. I haven’t called in months, but this is what interests him.

The opening line immediately tells us what we’ll be digging into: a problematic relationship with a parent. The section, titled after turkey, is a food the narrator’s father is allowed to eat but one he doesn’t want. He considers turkey emasculating. It’s the kind of food his son eats, a man he feels is nagged and bullied by his wife. We learn about his disappointment with his son by the shame he feels in what he consumes. The intricacies of their family life are shown through what’s been ingested:

When I called my father several weeks later to tell him that we had made it home safely, the first thing he wanted to know was what my sister-in-law had served for lunch. ‘Sloppy joes,’ I told him, and there was a short pause of disappointment before my father, who has never cooked anything in his life, replied triumphantly, ‘I’ll bet they were turkey. You know, all she gives him is turkey.’

Again, they’ve gone several weeks without speaking and he wants to know what she ate so he can verbalize his disapproval. A man who has never cooked a meal in his life finds ways to discuss his son’s failings through food he wasn’t invited to eat. Though unable to talk to his daughter about his feelings, he’s eager to discuss food he’d like to enjoy. In the second section, titled after the lovingly nicknamed “broasted chicken,” the narrator’s father leans hard into this wishfulness:

‘The café in Fentonville has two broasted chicken specials,’ my father begins the conversation, not bothering with more standard pleasantries. ‘Mashed potatoes, a roll with butter, gravy, some kind of vegetable or other.’ It is as though he is reading love poetry over the phone, his voice greedy and helpless.

Though the narrator never explicitly expects emotions from her father, she still notes their lack—particularly the fact that he’s so willing to dig into something that’s comfortable for him at the expense of her comfort. While his language with her is stilted and awkward, he’s “reading love poetry” to food he cannot have. This theme of comfort/discomfort reaches a crucial point when she stays with him while he recuperates from illness, the two of them trapped together in the house where she grew up. The narrator is queer and has a long-term partner, Geraldine, whom she’s left behind to help care for him. The father does not inquire about Geraldine, pointedly ignoring this important part of his daughter’s life. There are instances, however, where we spot bare moments of almost-communication. This scene, after dinner, shows a shift:

On the fifth night, he retired earlier than usual, and, when the phone rang, he picked up his bedroom extension quickly.
‘For you,’ he announced in a loud, flat voice that carried easily down the hallway, and when I picked up, I could sense him there—hostile but, I could not help but think, perhaps secretly wanting to understand this thing that made no sense to him, and so, for just an instant, I considered letting him listen.
‘Yes?’ I said brusquely, greeting Geraldine the way I would a telemarketer.
There was a pause. In a low, confused voice, she asked, ‘Are you okay?’ and I saw at once the folly of thinking that I could inhabit both lives at once.
‘Dad, I’ve got it,’ I said sternly, and I heard the double click of him hanging up as it traveled across the line and through the house.

For once, the power is in the narrator’s hands. She’s baffled by it, so unused to an opportunity for actual communication. But because of their lack of emotion toward each other, she speaks to her partner in the voice she’d use on her father. It’s the kind of tone you’d use on a stranger: business-like and curt. She hears the double click of him hanging up and notes “folly” in thinking she could inhabit two lives at once. Nothing will change in their relationship. The moment passes. She remains hungry.

The physical body of the house also reflects their continued breakdown in communication. Once a family home, now it only holds the father and his hoarded things. Its basement has been steadily flooding for years. Everything has spoiled. Books, furniture, and endless amounts of “preserved” items—lard, canned goods, meat—all rendered inedible by the passage of time. In an attempt to help her father, the narrator cleans all the rot from the basement. She collects eight garbage bags full of moldering junk with manic intensity, mindful that she’s doing this to try and “salvage” something with her father. The task, done with love and meant to clear the debris blocking lines of honest communication, becomes Sisyphean as her father secretly puts everything back:

[…] the next morning when I got up early to cart the garbage cans down to the road for pickup, they were all empty. While I had been out walking around letting people know my business, my father had undone all of my work, returning everything to the freezers.
That was day three. We spent the last four days of my stay in idle silence.

The last section, titled by the pheasant her father has shot sometime over the last decade and stored in the moldy freezer, shows the lasting effect of poor communication between the two. In a clumsy attempt to give her a gift he values, he offers up the bird. When she questions whether it would even be edible, he takes the refusal as a betrayal. Their future communications are shaped by this conversation. When she calls again, he’s unwilling to pick up the phone. She sits alone listening to it ring. There’s no response.

Food takes on deeper meaning when we consider how painful it can be to eat things that don’t sit right with us. To force down something rotten or poisonous can harm us in deep, lasting ways. Deprivation—of nourishment, of love—means that sometimes relationships feel like starvation. By laying out the trajectory of miscommunication through things that are never eaten, Ostlund shows us how powerful hunger can be.

Tags:Lori Ostlund, The Bigness of the World