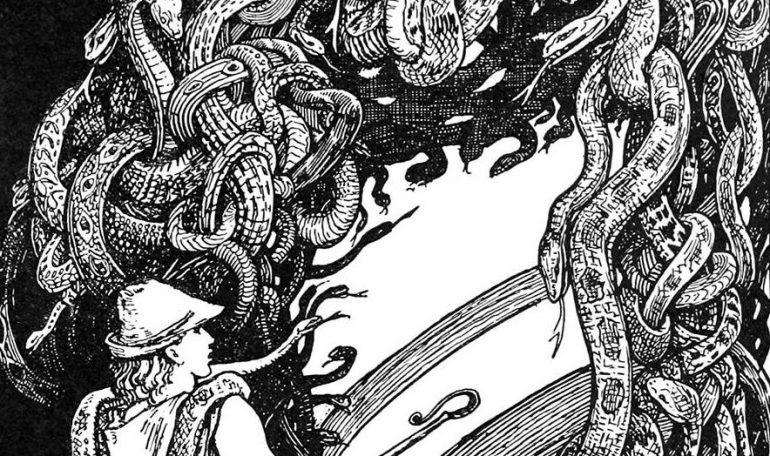 Trickster Feminism, Anne Waldman’s latest collection of poems, isn’t an easy read. Like the many “trickster” myths that persist around the world, it constantly rejects expected narrative trajectories and takes sudden left turns into the realm of imagination. Waldman maintains a sense of artistic lightness while constantly confronting heavy problems like violence, imperialism, climate change, and the threat of nuclear fallout. How can feminist theory and art look in the eyes of a future that seems increasingly doomed to eco-catastrophe? And what does that have to do with trickster myths? The sentiment expressed by one of the book’s epigraphs, from Hélène Cixous (“I am so happy in the silky damp dark of the labyrinth and there is no thread.”)—this dual state of feeling both lost and found, both desperate and joyful—seems somewhere at the heart of it. Waldman plays with linguistics and leaps gracefully across expanses of time and space, emulating the playful trickster figures that scamper and slither in the shadows.

Light is always on the move in this collection: tricksters around the world tend to steal fire for humanity, making them culture heroes rather than mere mischief-makers. Beyond stealing fire, common attributes of tricksters include wit rather than brawn, a knack for escaping, and a tendency to upset the powers invested in maintaining the status quo. If mythologies are meant to illustrate why the world is the way it is through a kind of structured—and almost always hierarchical—narrative architecture, then tricksters play the essential role of demonstrating how the world can instead resist structure and bend toward entropy.

The first poem in the collection, “trick o’ death,” sets the tone by slipping in images of trickster-creatures without meditating on them for long—the spider, the coyote, and most prominently, the rabbit. This trickster emerges out of many cultural sources ranging from characters like Br’er Rabbit and the White Rabbit to the widespread superstitions about seeing rabbits and even uttering the word itself. Waldman writes:

from our body of light

though we be trickster shadow

crossroads will make you stand tall

in your architecture of chance

‘down the rabbit hole’

you rise out the other side

Quotation marks are relatively sparse in the poem and the collection as a whole, so the expression “down the rabbit hole” stands out with a special summoning force. It contains several connotations and can be considered self-contradictory; in one sense, it can be the entrance to a kind of hallucinogenic dream-world, in reference to Alice in Wonderland as well as psychedelic drug culture. Meanwhile, it can also imply a journey into reality beyond one’s experience, where “you rise out the other side,” gaining knowledge of what the world is really like. This latter sense is how the phrase is used in The Matrix, where finding out “how deep the rabbit hole goes” is what happens if you “take the red pill”—the opposite of staying in the illusion.

In-depth research of a topic can sometimes be called a “rabbit hole,” but that term often has a derogatory sense to it, like getting sucked into a succession of related videos on YouTube. In my own “rabbit hole,” I searched the web for writings on the topic of feminism and rabbit holes, and I found that the phrase can also be used as a dig at feminist theory when writing it off as self-referential or needlessly obscure. On the flip side, a few of my finds instead referred to the growing “Red Pill” conspiracy of “men’s rights activists.”

Whether or not Waldman is intentionally working with this culture war of references to The Matrix, she is certainly interested in the word matrix. At first, in “trick o’ death,” it arrives as the climax of a kind of chant:

to open your own tomb

when you are both tomb

down, sepulcher of women

Here, the placement evokes a less common use of matrix, which can refer to a womb. Meanwhile, the poem “mash butler” evokes Judith Butler to remind us that through the Indo-European root for mother, the word matrix also shares kinship with mate, matter (as in Bodies That Matter), material, and so on: “That mater has a feminine / gender / to be exploded.” The word matrix repeatedly appears elsewhere, acquiring more mystery along the way. In the poem “radio play: face-down girl,” for example: “Trick her in her matrix. Double helix snake of mind.” The aural resonance of the “tricks” draws special attention to how matrix, like trickster, is formed by adding an agent suffixes -trix and -ster. But a more tangible trickster is also hiding in these words, which are echoed later in the poem: “Double helix. Held me. A snake in you.”

While Christian theologies of the Fall of Man have come to associate the serpent with sin, the story itself doesn’t mention sin, just knowledge. The snake convinces Eve that the fruit is good to eat, and in true trickster fashion, that isn’t exactly a lie. When Adam and Eve realize that they’re naked, they’re “lost” in one sense—yet it’s as if an illusion has been stripped away, and they suddenly have the “knowledge of good and evil,” which seems like a decent goal for any feminist. Meanwhile, in some schools of thought within Hindu and Buddhist philosophies (Waldman herself studies and practices Buddhism) the snake is used in a parable to explain the nature of illusion and its relationship to reality. In the parable, a monk sees a snake and is filled with fear, but then he is suddenly at peace when he realizes that what he sees is just a rope.

Both of these snake-tricksters mark a moment of revelation and a high-stakes shift of worldview. The final portion of “radio play: face-down girl” ends with a question and answer that are concerned with when this macro-historical crossroads might occur in real time: “When? When I went down.” Went down where? And does she “rise out the other side”?

By associating the snake with the shape of DNA, the poem could be suggesting that this urge toward knowledge is innate—the trickster who illuminates the world isn’t some third-party imposter, but is a manifestation of human nature. Meanwhile, the image of the double helix also seems to point toward a question that looms in the background of the entire collection: How does feminism interact with this particular moment in world history, where science has become so advanced that we can study the individual amino acids on a slice of DNA and yet we can’t seem to prevent ecological disaster?

The image of the trickster at the crossroads emerges even more clearly at the end of “denouement,” which closely mirrors “radio play: face-down girl” in structure. Most of the poem deals with the problem of collective apocalyptic anxiety, centering vague threats from melting ice caps to “rogue nukes,” and the paralyzing depression of it. But here, the focus seems to shift to lived experience:

History will decide moments, but you live them. Crossroads beyond identity you have to go to stake for your fractured land. Place where forces gather. They could put you away, rights stripped down, murder you. Shadowy nimble trickster comes mysteriously out of twilight, walking backward, walking sideways and flying in air too. Scrying the tracks & flight patterns you will come to when we’ve forgotten how to read: Rescue.

These lines remind us that although the anxiety itself might be a collective experience, the stakes aren’t equal for everyone; the most likely “apocalypse” will be a deeply unequal and divisive one, disproportionately affecting people of marginalized identities. The sense of a unified world suffering in the face of eco-catastrophe, while galvanizing in a sense, is also an illusion.

Earlier in “denouement,” Waldman draws attention to the ambiguous nature of the word apocalypse itself: “This time, this time. Apocalypse, this time, this time.” Is it the apocalypse now? How about now? Apocalypse only comes to mean “end times” vis-à-vis its association with the book of the Bible translated in English as Revelation; etymologically, both words simply refer to the act of revealing something, showing what was once hidden. Similarly, denouement does not find its roots in the idea of something ending; it’s an unknotting, an unraveling. People talk about the “end of civilization,” but there will always be some kind of civilization after things unravel. Instead, it’s a question of who will survive the transition, and how that new civilization will organize itself.

For feminism to move into the future, it has to be invested in the complex work of overturning illusions, uncovering the inequalities that continue to persist in the shadows. To some extent, we are already in a feminist age of uncovering: from reporting workplace harassment to filming police brutality, the tools are more available than ever. Meanwhile, the United States is finally beginning to uncover and reckon with its foundations of slavery and genocide. This, too, has to be a feminist agenda. I have read and reread Trickster Feminism wondering if it could be some kind of manifesto, but in the end, it seems more like a trickster itself. I think it’s about finding ways to shed light on unthinkable tragedy and be able to bear it, “rise out the other side”—to survive and to help others do the same.