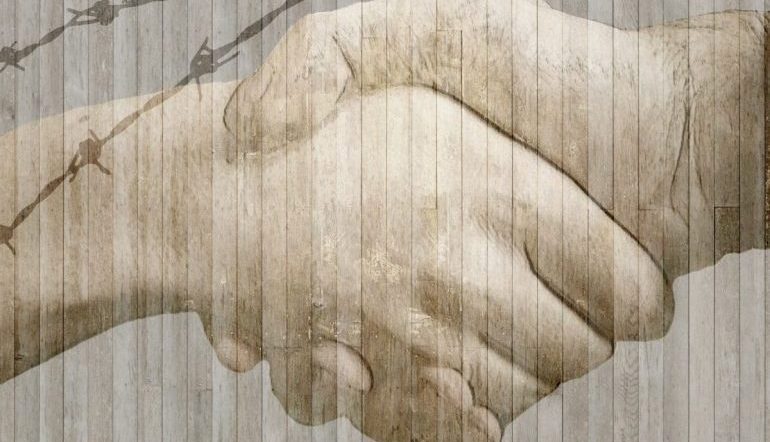 “My idea of home is a verb,” says Rowan Hisayo Buchanan in her opening chapter to Go Home!, a new collection of writing she edited, released earlier this year. She refers to the Japanese verb for traveling homeward (kaeru), and it is a sentiment that resounds throughout the stories, poems, and essays that follow: to escape from home, to find home, to yearn for home, to feel at home. As I’m reading these pieces, I feel as if I am traveling homeward too; I am thinking about the ways I—and we as a country—define our home through our actions.

I am thinking about this as my country leads military strikes in Syria that are likely to kill more innocent civilians. The suffering of Syrians, it seems to many, justifies this action, and yet is not enough to make the refugees of the conflict welcome in our midst. According to State Department statistics, the US has admitted only 11 Syrian refugees for resettlement so far this year (on the way to a marked decrease from roughly 3,000 in 2017, and more than 15,000 in 2016). The administration continues to ban travelers from predominantly Muslim countries, begins work on a border wall, fails to deliver the nation’s promise to would-be dreamers, and ramps up anti-immigrant and racist rhetoric. If home consists of actions, I don’t feel at home in the USA anymore.

I began reading The Displaced: Refugee Writers on Refugee Lives this month, and have found that it offers perspectives all too often missing from the current debate on border security and immigration policy, which privileges the voices of white, non-immigrant Americans. Like Go Home!, the collection is a call to action, particularly to fellow writers, who, as editor Viet Thanh Nguyen says, have the ability to speak for the voiceless and to offer “the memory of our own humanity, and our inhumanity.”

“Many writers, perhaps most writers or even all writers, are people who do not feel completely at home,” he explains. “[I]t is from this displacement that writers come into being, and why so many writers have sympathy and empathy for those who are displaced in one way or another.”

Nguyen, Buchanan, and the writers featured in their collections invite readers to reflect on a more complicated notion of home. The stories within these pages share the positive associations of food and tradition as well as the intimate struggles of displacement—including trauma, conflicted identity, and a sense of alienation from one’s own culture.

“There are degrees of estrangement,” Amitava Kumar writes in the piece entitled “Love Poems for the Border Patrol” in Go Home!. In the beautiful final essay of this collection, “The Faintest Echo of Our Language,” Chang-Rae Lee hints at these estrangements through the story of his mother’s last moments, memories of her life in Korea, and the way the words they share with each other also divide.

The stories in The Displaced speak not only of estrangements from languages, loved ones, and countries of origin, but also of the pain of being in a new place that is not always accepting. “Becoming a refugee is a gradual process, a bleaching out, a transition into a ghostly existence,” Lev Golinkin writes. “Most days I hide in plain sight,” writes Joseph Azam in opening his essay about his family fleeing from Afghanistan to New York. Dina Nayeri shows how the expectation that a refugee must show constant gratitude becomes a trap, and Novuyo Rosa Tshuma challenges the notion that refugees must prove themselves exceptional in order to be worthy of a place in their new homelands.

In both collections, I find ample evidence of our humanity and of our inhumanity, and it underscores for me what is at stake in our country today. I want to press these books—along with others like Mohsin Hamid’s Exit West—into the hands of anyone who doesn’t see a need to open our borders to the displaced, anyone who would not otherwise see our common struggle. The act of reading these stories alone can go far to build empathy and dispel the idea of the displaced as some distant “other.”