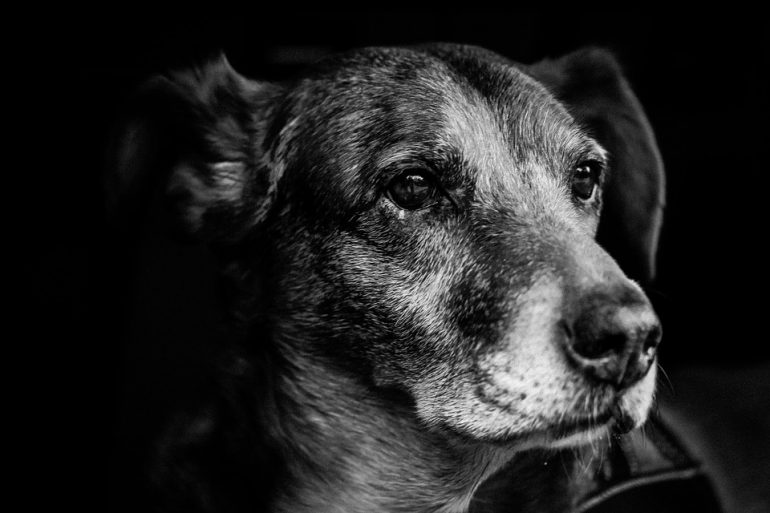 Someone steals the electric pencil sharpener. Then the standing lamp in the office of Leslie Shakespeare, Director of the Concordance Institute. Next it’s the mailroom copier. Eliza Shakespeare’s purse, from off her shoulder in the checkout line. Three Institute employees get mugged on the sidewalk, outside the Pancake House, and Officer Right advises everyone to walk down the middle of the street: he’s “never in his years on the force known anybody to get mugged walking down the middle.” That night Alvin and Alicia, walking down the middle, also get mugged. A thief crawls between the air conditioner and window frame of the Bernstines’ bedroom, turning on the light to get his bearings. A man in a baseball cap asks Yvette directions to the library in broad daylight, then attempts to steal her apples.

Lore Segal’s “At Whom the Dog Barks” is not so much concerned with cause and effect as it’s concerned with coincidence and pattern. Or perhaps coincidence is the name for cause and effect outside the realm of human perception. Either way, this series of thefts addles the Concordance academics, especially Leslie Shakespeare, the Institute’s paragon of logic and reasoning, who shifts at the story’s start from the pragmatic—”For goodness’ sake, let’s get ourselves a new electric sharpener”—to, by story’s end, the unmoored and hysteric: “What is going on! […] What happened to thieves doing what they do decently under cover of night!”

Leslie’s frustration might be as good as ours. Can a story successfully depart from the crusted order of rising action, direct causality, characters acting and reacting upon each other? In other words, can fiction chart into the frontier of what much of life actually looks like: clumsy meanings, oscillations of order and disorder, veiled systems not quite in human grasp? The thefts, if unrelated, certainly escalate. But escalation without human cause—is that a story? If so, how might this pattern capture something of elucidation, of awareness, of meaning?

E. M. Forster conjured a theory of plot now so ubiquitous I first encountered it at seventeen in a mainstream comedy, delivered by a fast-talking professor who lectures from the urinal. The idea, concerning the difference between story and plot, comes from Aspects of the Novel, published from a series of lectures Forster gave at Cambridge in 1927. You probably know the idea, but here’s the quote, from Forster:

What’s interesting about Aspects is that Forster holds a pretty cold eye on the English novel. “It does not contain the best stuff yet written,” he writes, “and if we deny this we become guilty of provincialism.” The major English novels “are little mansions, not mighty edifices, and we shall see and respect them for what they are if we stand them for an instant in the colonnades of War and Peace, or the vaults of The Brothers Karamazov.” As is often the case, Forster’s claim tells us more about his own aesthetics than the actual state of the novel. Though Tolstoy and Dostoyevsky both might be read, in a certain light, as caving in the ceiling of the Victorian novel—inviting in a heftier psychology, an immediacy of existential suffering, a broader allowance for ambiguity and human mystery—to say the English novel is undeveloped by the time of Forster’s lecture rings hollow. After all, by 1927 the novel has contorted and bent into Woolf’s Mrs. Dalloway, Hemingway’s The Sun Also Rises, Joyce’s Portrait of the Artist and Ulysses, and the expansive psychological canon of Henry James. But Forster is more interested in proper treatment of plot and character than to experiment with the two. Though he admires Woolf’s language, he takes issue with her treatment of cause and effect: “her problem” is that she is a poet “who wants to write something as near to a novel as possible.” In turn, Woolf, who models some early plotting off of Forster’s, writes in 1924’s “Mr. Bennett and Mrs. Brown” that Forster and too many writers like him “spoilt their early work because, instead of throwing away their tools, they tried to use them.”

It’s an old conversation. How much plotting does a story need? Do taut patterns of cause and effect necessarily lead to aesthetic advancement? Of course, even at the farthest reaches of Modernism, experiment doesn’t so much abandon causality as it bats it between smart paws. And so what Woolf might take issue with is not so much Forster’s insistence that causality leads to inquiry, that plot is a useful tool, but his assumption that a strong causal springboard is aesthetically more valuable than any alternative arrangement within a text.

So then thesis, antithesis, and Charles Baxter in his 1997 collection of essays, Burning Down the House, to swoop in and synthesize: “Almost every narrative struggles with two features of action in time.” The first is the causal chain, the mystery unfolding action. The second “occurs where narratives move in reverse—when they come dramatically or imagistically to a point that is similar to the one they have already seemingly passed.” Baxter calls this sort of repetition or echo effect “rhyming action.” He points to Humbert Humbert’s shooting of Clare Quilty, the bubble of blood in Quilty’s mouth repeating Lolita’s gum-chewing. But rhyming action is everywhere. It exists in King Lear’s incessant repetition of “nothing” throughout his play after using the word to turn Cordelia from his home. It occurs in Yaa Gyasi’s recent Homegoing, in the generational repetition of women holding tight to their brooms as if trying to sweep messes that are centuries old. And it exists in Lore Segal’s “At Whom the Dog Barks,” where a group of befuddled academics—cloistered, gated, safely separated from the nearby ghetto—try their best to understand a series of thefts escalating as a result of no one, nothing: either some divine coincidence or a mystery none can quite seem to figure.

“It’s about there are these three kids, Theo and Ellie,” says Teddy Bernstine, describing his book Backyard Thief, “and their dog is Cassandra, which is how come Cassandra got to be called Cassandra, that is going to be the police dog. This thief has stolen their dad’s glasses and everything. Oh. I forgot, there’s this big old policeman that is really dumb. His name is Drummond. And the parents go to bed. They go out in the yard and the children get mad because this squirrel runs up the tree and Cassandra doesn’t stop barking and the dad comes down and puts Cassandra in the attic and they don’t know the thief is all this time sitting in the tree. Oh and I forgot that…”

Nat Cohn, another Concordance academic, cries, “We don’t write stories like that anymore! Chronic plot deficiency is our problem.” He seems to be speaking to us through the text.

The dog in question, the one barking, is Teddy’s own Cassandra. She barks at the old office dumbwaiter, where the copier has mysteriously been stashed. She barks at the thief climbing in the window, while Joe and Jenny Bernstine do their best to ignore her. Soon she’s barking at Leslie’s wife, Eliza, who admits to having lifted a sixty-nine-cent spatula. She barks at Ilka, the collection’s protagonist: “Never send to ask at whom the dog barks,” says Ilka, “she barks at me. The roast beef!” She barks at Leslie: “Oh Cassandra, that’s a long time ago.” Finally at her own front paws.

“The solution of one mystery activates the sanguine part of the mind to expect the next mystery,” writes Segal. “That mysteries as such are able to be solved.”

Forster would rather these mysteries all be solved in our fiction—we learn more about characters when we know who stole the lamp, why new thieves prowl the streets, what Leslie did to warrant Cassandra’s attention. But Segal reminds that in these human bodies sometimes all we get are the rhymes, the patterns. Sure, the answers might stand before us. But we don’t always have the tools to translate the barking.