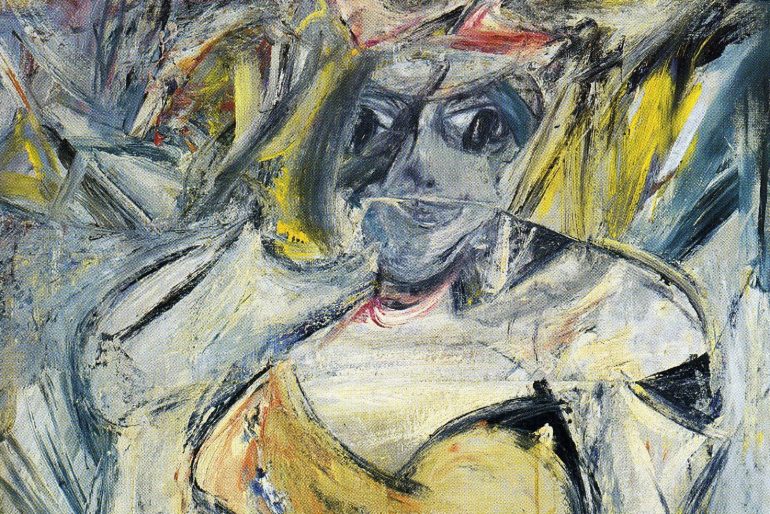 The first scene is a Borders in western Washington. The carpet is gray and vacuum-streaked. Automated milk-frothing nozzles make hissing sounds from the reading area. Popular hardbacks sit on tables and at the ends of shelves in plastic holsters. I am here with my friend Owen because we’re in college, it’s summer, and besides a part-time kitchen job at a waterfront fish joint I have very little happening by way of responsibility.

Owen picks up a book with strange pastel figures on the cover (I’ve never seen a de Kooning), starts flipping through, and hands it to me. The book, called Sixty Stories, is by a writer I’m unfamiliar with. “Some school friends like this guy,” says Owen. “He’s funny.” I buy the book and the man behind the counter asks if I want a bag. This summer after freshman year of college is right when the last residual magic, childhood-wise, starts its terminal evaporation. The sky is blue and cloudless and there’s really not much going on save roaming around and reading book after book and complaining with the other kitchen guys about tip allocation.

The problem with the first and only story that I read: I can’t stand it. “Butter butter butter butter butter butter butter,” goes a surprisingly fair portion of “Eugénie Grandet.” There’s an illustration of a hand; a child with a ball. If this story is funny I’m not in on the joke. Or, much worse, the joke is in some sadistic fashion being played on me, and I’m not smart enough to understand how it is I’m being played on. Where’s my epiphanic moment? Where’s my sweet well-earned meaning? Doesn’t Mr. Barthelme have a duty to provide these to me at seventeen U.S. dollars plus sales tax? I feel I’ve been duped. Duped by my own good friend. But I can’t tell Owen I’ve been duped or anyone else for that matter because what if they understand something I don’t about this thing? What if what I’ve come to expect from a story is unsophisticated and coarse? What if literature is a far more strange, deep, and unsettling body of water than I’ve come to expect, and it really is possible to wade too far out and drown in it?

Sixty Stories goes onto my shelf. It becomes a black spine with red lettering. I don’t mention anything to my friend.

A few years later, in Boston, I decide to take another stab at it. I’m reading Charles Baxter’s Burning Down the House, Nicholson Baker’s U and I, essays by Lorrie Moore and Louis Menand and George Saunders, which all keep referencing, with glee, this disturbing awful man whose book is still wedged in with my belongings. I learn that he died a month before I was born, which instills within me a weird sort of psychic gravitational pull, like learning you’re from Norway and developing a sudden fascination with pickled fish. I listen to Donald Antrim (another Barthelme-lover) read “I Bought a Little City” on the New Yorker Fiction Podcast. The first time hearing the prose, I laugh out loud.

So I bought a little city (it was Galveston, Texas) and told everybody that nobody had to move, we were going to do it just gradually, very relaxed, no big changes overnight.

And so I rush back to my room and crack open the spine and “A Manual for Sons” starts:

What’s the name for feeling like you’re on the cusp of grasping something, but then it slips out from under you? Every high school stoichiometry student must know it.

“The New Music” is just dialogue. Dialogue that sustains itself for twelve pages:

How many times do you eat frog legs in how many parts of Vietnam and France before you decide you’re just not the kind of person for whom “swampy” is a reasonable descriptor of something that goes into the mouth?

Which is one way of asking: When we first pick up a book, how much buy-in comes from whether or not we actually like it, versus, say, being entirely psychosocially implicated in a culture of reader opinions and college syllabi and corporate marketing tactics and the existence of the Penguin Classics? Are either of these forms of buy-in more valuable or honest than the other? Is it ignoble or disingenuous to want to like something based on the fact that other people (people who have been at the reading game longer than you, and who write stuff you admire) seem to like it?

I’m going to go out on a limb here and posit that your answers to these questions put you on whatever side of the fence you’re on in re your relationship to experimental literature. Because stories that boldly experiment are, fundamentally, stories that behave badly: breaking rules, withholding easy meaning, not too distressed, at least right off the bat, with whether you can relate to anything. And this little fact, if you’re a sentient human being, is frustrating, discomforting, a pain in the butt, aggravating to no end, etc., etc. There are good, decent reasons to like the collected works of John Irving.

Actually this whole phenomenon is a system of expectations that a friend of mine in the Midwest turns into a sort of game with her first-year writing students. She teaches some of the craft basics—scene-setting, dialogue, details—then gives her kids a “first draft” of a “student story” from an “old class workshop” to practice on, which is really just some delightful piece of bizarrerie she’s pulled from the Barthelme canon. Said students read it and invariably detest it and write out whole big sloppy lists doctoring out all its problems. And then, for some reason I don’t know, trusting her, I guess, they seem never to look the thing up online for the week it takes her to then bring in a second story (of a very different flavor) written by “the world-famous Donald Barthelme,” which story the whole class then spends a great deal of time discussing and commending and prodding with gentleness and humility—the ones who don’t like it, at worst, commenting that the story isn’t really their style—all before this teacher-friend maliciously snaps the tablecloth out from beneath the bowls and the cutlery and holds up to her students the surprise-reveal fact that their buy-in has a whole lot to do with the container.

Which is all to say, as the years go on, whether ignoble or not, even though what I continue to feel is akin to how these students treat that “old workshop story,” the loving essays about Barthelme that I encounter time and again by authors I like keep me slogging back to him over and over again until there’s first another Barthelme story I’m surprised to like, and then another one. And slowly, clumsily, finally (I honestly can’t even point to exactly when), there’s this sort of awkward tipping motion and I’m suddenly gleeful and wide-eyed and into these small communication vessels, and discovering more and more stories I like by this guy. Actually, much weirder: the stories I initially couldn’t stomach I begin to invariably like. As in: I read “Eugénie Grandet” and there’s stuff I admire about all that milk fat. My entire understanding of what I’m looking for in art starts to fall, or rise—I guess it depends on what side of the fence you’re on—away from me.

And so, Donald Barthleme. Whose work is gorgeous and great and incessantly weird:

As a single balloon must stand for a lifetime of thinking about balloons, so each citizen expressed, in the attitude he chose, a complex of attitudes. One man might consider that the balloon had to do with the notion sullied, as in the sentence The big balloon sullied the otherwise clear and radiant Manhattan sky. That is, the balloon was, in this man’s view, an imposture, something inferior to the sky that had formerly been there, something interposed between the people and their “sky.” (“The Balloon”)

And so, Donald Barthelme. Whose philosophic heft gets down and dirty:

By negating the historical actuality poetry quote opens up a higher actuality, expands and transfigures the imperfect into the perfect, and thereby softens and mitigates that deep pain which would darken and obscure all things unquote page 312. (“Kierkegaard Unfair to Schlegel”) Now this would seem to be a victory [but what] is wanted, Kierkegaard says, is not a victory over the world but a reconciliation with it. (Ibid)

And so, Donald Barthelme. Who in his story “The Party” invites you along if you wish:

Dear Francesca, tell me, is this a successful party, in your view? Is this the best we can do? […] Is it really important to know that this movie is fine, and that one terrible, and to talk intelligently about the difference? Wonderful elegance! No good at all!