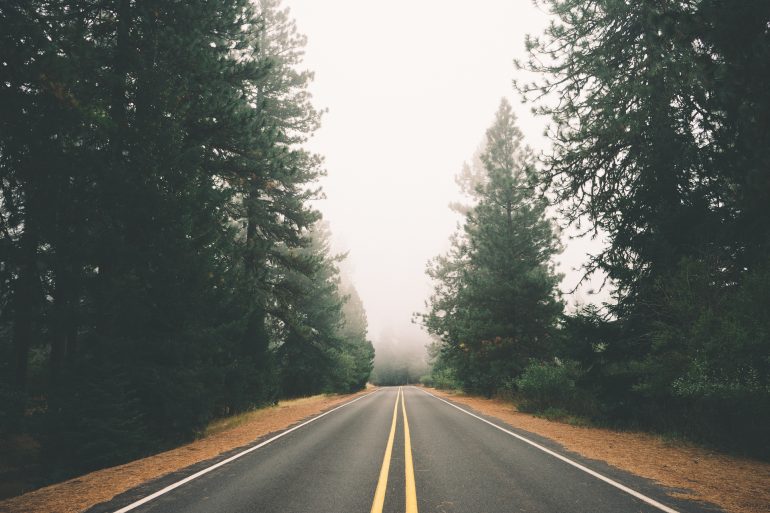 It starts with a stroller: pink beams, brown fabric; the whole architecture collapsed into branches and leaf-rot and gritty snow. Five of the six wheels—two dual rears and a single front one—point up like the legs of a submissive dog. The sixth is snug in the dirt. The dangling white wheel rims, it should be mentioned, are torqued like offset bones. It’s difficult telling where the stroller starts: the branches, so thick and bambooish, seem to fuse with the metal. It should be mentioned that the stroller’s pink is an odd clumsy color against the malnourished birches, the reddish branches, the white snow. It should be mentioned that this is a photograph, from a creek at the cusp of Champlain, New York, and the US-Canadian border. A photograph from an article about American Muslims fleeing the US through these scraggly woods to be apprehended by Canadian authorities.

Say that you read this article, with its far-north chill and hard-working white townspeople and its muddy grass and slate streets and locked-up three-season porches, and you see your own Vermont, just a ferry ride away, in the mirror. Say you are a fiction writer, and though the words of this article pass through you softly, unsticking, the chucked stroller lodges and will not let loose. It chafes the next morning, and then the next, the other story you are writing getting interrupted by your own compulsion to click back into that article and stare at the stroller longer. You begin showing it to your friends and to your partner. What they see is what is there: a lot of political bullshit and a stroller tipped into the woods.

You are coming to believe, perhaps irrationally, that the stroller is trying to communicate an idea to you and you alone. You are aware this is how one might describe a symptom of schizophrenia. The idea this stroller is trying to communicate is more complex than the scope of its purpose within the article. If you could figure out how to say it! But each time the ideas jumble, the chain slips your grasp. Your friends are patient but honest when they say that though the article makes them feel helpless and sad, the stroller has no more weight than the photo of Champlain, or the lost boot, or the travel document buried in mud.

There is a language more delicate than the language we speak, that language of immediacy and argument, through which so much that is accidental and unexamined slips past, and that is the language of image. Image after image, binding a story’s broad constellation like stars. But how to tell this story? You start from the article: with realism, with characters. Muslim migrants, working class locals, Canadian police, and soon before you the character forms: an American citizen and mother by way of Yemen, who after her night shifts at a circuit board factory in Minnesota comes home to pack her eldest daughter’s lunch. She pays the taxi driver at the end of the road near the border. Her husband will follow a month out. She walks her older daughter into the thicket, the toddler squirming in the brown fabric seat. Her heart leapt when she first saw that stroller at Goodwill for the price it was being sold for. But the terrain is too unsteady. She’s pulling her toddler out, muddying her boots in the dirt. A daughter in each arm, she wishes that she wasn’t right now thinking of her voyage all those years ago from Yemen, when migrancy had seemed an identity she might one day shed.

Or another cliché: the Canadian police officer who, to be honest, is a bit pissy about this whole migrants-coming-in-from-the-US sort of thing. She doesn’t think she has a problem with Muslims. When she’s watched the young men, and the women in veils, and even the well-dressed children get down on their knees in the holding room of the precinct to pray to what must be the Mecca-facing wall’s Mr. Coffee and powdered creamer, the main thought she’s heard in her mind has been, Hey, good for them. She does think that rules broken without consequence are not really effectively rules. And seeing as that she got into this line of work for the very reason that she, in fact, actually likes enforcing rules, thinks that rules are important—perhaps, to be so bold, the bedrock of a society she actually likes—it has been a drag, in all honesty, that a good thirty percent of her job now suddenly involves helping people break the rules. She smiles at those US Muslim citizens and helps them up the embankment. On more than one occasion she lifts for a particularly exhausted mother a heavy suitcase as if she were a taxi driver and not an ambassador of law and order in her great lawful province of Quebec. And now, doing a patrol through the woods, the pink stroller doesn’t even surprise her. What does surprise her is how angry she gets at seeing it all stuck in the mud. Something about what she’s giving up, and how she’s now seeing what these people are also giving up? Everyone giving and giving, so who’s gaining here? It’s the first time in many years that she has felt the distinct unlawful need to punch something.

These stories, though fictional, are almost true, or true enough. And though each might give some breath to the cast and workings of an international tension, though each might be, to some degree, useful, neither seem to shake loose two inevitable problems. The first and most obvious: you are not communicating the thing you’re trying desperately to communicate; the stroller stuck to your mind for its surrealism and horror. But in these two stories, it has merely become a prop in the awakenings of these characters.

The second and more ground-shaking: these stories assume you can peer into the hidden cogs of the police officer and the Muslim mother. Which, okay, maybe to some extent you or anyone with some empathy and research can at least partially imaginatively pull off. But it seems the whole crux of the bind your country happens to be in—being that the immigrants who once saw it as a sanctuary and so therefore, if anything, had probably one of the more optimistic views of what your country might be for them, that these people are actually fleeing it—that this bind has come from cultural and political rifts so great that most everyone in your country, without really trying too hard, thinks they understand the inner workings and biases and wrongheaded beliefs of just about every group they disagree with.

In other words, you realize, if you make this a familiar digestible realist narrative, one in which the stroller offers up an epiphanic moment we can all nod at and consume and then go about our business—if you do that, what you are essentially doing is twisting the stroller into the very antithesis of what it was for you in the first place: an image so startling and severe and (you shy away from the term) “third world” that it scared the living bejeezus out of you when you hopped onto Google Maps to discover that a trip from your home in Vermont to the very New York road described in this article takes a measly hour and nineteen minutes by car and ferry. Ours is a good-natured, naïve people; we are regularly surprised to see so much blood on our hands. A border guard who gains a heart, Seussian as it is, makes child’s play of what’s needed, which is a systematic overhaul. The Yemeni mother who discovers she’s a migrant betrays the more likely fact that she’s known herself a migrant all along. It’s only from small bubbles of relative comfort that such epiphanies have anything to burst.

And so the circle of imagination widens. Say the stroller gets pulled up from the mud by a Champlain woman who has made a museum of her home, a museum of discarded belongings. Dislodged shoes, candy wrappers, slender briefcases, the scattered pages of books. Word of the museum migrates south, down into New York City and Philadelphia and Boston. And so the Priuses and Saabs of certain kinds of Americans begin to arrive, driving behind the taxis in which another sect of Americans sit in fear, their toothbrushes sealed in plastic baggies.

Or say as each Muslim family steps out of Champlain into Canada, the size of that stroller grows. It becomes a well-documented phenomenon. The pink girders of the structure hold the thick brown tarp that has dwarfed the birches and is slowly taking the sun.

Or say it’s a story turned inward: a writer so obsessed with this one single stroller that when conversation inevitably shifts—when Champlain’s northern border becomes walled and fortified, or the tide of news changes to present new issues and social developments and fears—this writer finds himself trapped, ensnared by this one single image, still scrubbing clean and remaking narrative after narrative, trying to at last capture that one gleaming thing.