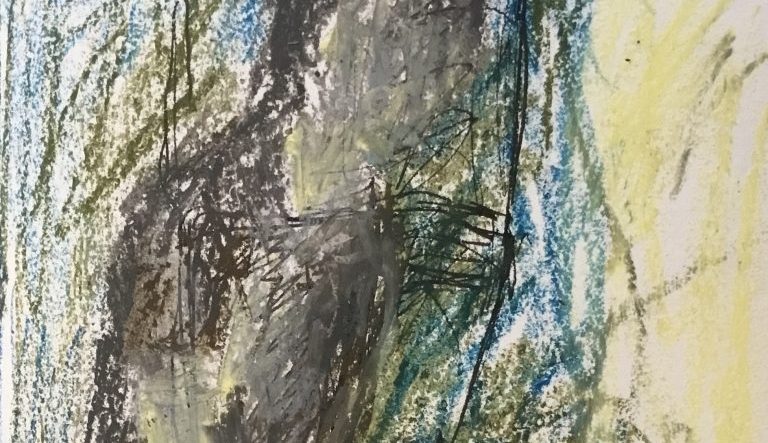 I would have liked to start this sentence with the claim that as a fiction writer I have little interest in gossip, but the accurate start is that since childhood I have been prey to oily rumor. On long drives to Idaho, pretending to play my Gameboy, I listened to my aunt tell my mother of the quiet struggles and minor tragedies of our relatives. In school hallways and the backs of classrooms, I amassed knowledge second only in power to the ability to string it back into being with words. If I wanted I could attribute this to a household of landmine secrets, but so many of us grow up in these kinds of households. Or, if I wanted, I could attribute this to my parents’ isolation (their friends in other cities, their families in other countries and states). But the truth was that gossip gave me something: the rush of harboring some knowledge of another without risking the exposure of relationship. A friend used to describe this sort of payoff as eating all the beef without sticking your hand near the grinder. Another friend once said that the childhood gossip makes the adult fiction writer, though that’s one I’m not so sure about. In To Kill a Mockingbird Aunt Alexandra finds it far too easy to stand on moral high ground, judging half of Maycomb; that’s why she knows practically nothing of the town by the time she leaves it. Between gossip and fiction there’s perhaps some blood relation, but if gossip invests in judgment, in righteousness, doesn’t fiction offer the powerful spirit of something else? The question is then—what is it?

To my eye there is no story collection in American literature more concerned with gossip than Sherwood Anderson’s Winesburg, Ohio—and no story in Winesburg more curious about that line between gossip and fiction than “Hands.” It’s the best known story in the collection, so the details might sound familiar. Wing Biddlebaum waits anxiously one summer evening for his only friend, George Willard, who might or might not visit him. Wing has expressive hands, which he tries desperately to hide. In a flashback we see George Willard almost ask about these hands before Wing sets them on George’s shoulders and instructs him to maintain his individuality, to dream—then noticing what he’s doing Wing becomes scared and runs home. There’s a longer flashback, now, sketching out Wing’s backstory. And then we return to this night of anticipation. George Willard doesn’t show. Wing eats bread and butter alone. His hands dart along the floor, picking at the crumbs he’s dropped to place them into his mouth.

On quick glance then not much of “Hands” seems overtly experimental—the only oddity is that without George asking and without Wing disclosing, we somehow arrive at Wing’s backstory. “Let us look briefly into the story of the hands,” states the narrator, after George decides he’ll never ask: “Perhaps our talking of them will arouse the poet who will tell the hidden wonder story of the influence for which the hands were but fluttering penants of promise.” The narrator tells us that Wing (neé Adolph Myers) was once a Connecticut schoolteacher who touched his students’ hair and stroked their shoulders. Accused of having sex with one, he was beaten and chased out of town. But if this is Wing’s secret, entirely undisclosed, then how have we suddenly launched into it? What is this strange summoning of the poet’s “hidden wonder story”? We cross a bridge now into fog and unclaimed land. The past plumbed up. The unstated and unexpressed brought forth. Our narrator has been constrained until now to the reach of limited observation, but here he seems to stretch, to expand, attempting to glean omniscience.

Here conversation often bends toward the question of who is narrating Anderson’s book. Angela Pneuman, who wrote a brief essay on the collection, says it’s George Willard. I’ve heard claims for the prologue’s old writer who dreams up these characters, as well as the prologue’s narrator who reads, ostensibly publishes, and maybe even amends the old man’s “Book of the Grotesques.” I suppose this is the sort of literary equivalent to a two-a.m. debate concerning Donny Darko‘s rabbit—the old writer is George Willard, or the old writer is Anderson and the first-person narrator George Willard, or both writer and narrator are simultaneously Anderson and Willard—but the reason I want to get past this is that what seems valuable about “Hands” isn’t who the narrator is but how the narrator manages this flashback.

Which is to say, whether this narrator truly knows Wing’s past or whether he’s just pulling yarn from town rumor, the way he goes about telling Wing’s story seems really strangely humble. He describes Wing’s passion, his relationship to his students, how he “rules by a power so gentle that it passes as lovable weakness.” Then he writes: “And yet that is but crudely stated.” The narrator sees that he’s not delicate enough or precise enough; he is skimming the surface. “It needs the poet there,” he decides. That poet who might unveil Wing’s dream and his “effort to carry a dream into the young minds.”

This conjured poet, I believe, is our narrator’s way of saying that even though he’ll tell Wing’s story he sure might miss the nuance and grumbling complexity beneath the surface. If this is admission of unreliability it’s not the sort of stock unreliability we’re used to: repression, redirection, manipulation. This is the unreliability of humbled subjectivity. An awareness of truths inaccessible. Perhaps this is why Pneuman sees in the narrator a certain “generosity of treatment.”

If gossip is about the juiciness of knowledge it is a false knowledge. He did this, she said that—these are but blunt ships on the filmy waters of intent and desire, mistaken perception and dreams. Gossip spawns judgment and judgment only works when the mysterious inner world is disregarded, when we trick ourselves into the belief that we can see one another fully.

Anderson dedicates Winesburg to the memory of his mother: “whose keen observations on the life about her first awoke in me the hunger to see beneath the surface of lives.” The hunger to breach this surface is the difference in the discoveries possible between gossip and fiction, between blunt dialogue and the measured flexibility and revision of the written word. To stay on the surface is to dodge curiosity, complexity, to cling to easy judgment. But beneath the surface is ceaseless space, room for the awe to be found there.