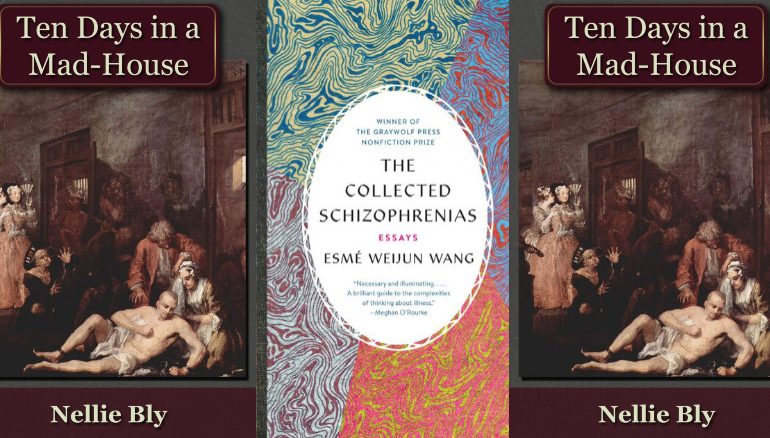 Early in The Collected Schizophrenias, Esmé Weijun Wang describes how society ordinarily conceptualizes schizophrenia and where that conception leaves the person who has it. “The story of schizophrenia,” Wang writes, “is one with a protagonist, ‘the schizophrenic,’ who is first a fine and good vessel with fine and good things inside of it, and then becomes misshapen through the ravages of psychosis; the vessel becomes prone to being filled with nasty things.” Both authoritative books and pop culture, she asserts, talk about schizophrenia as the total replacement of the “good” self. Loved ones observing the vessel protagonist may wonder if the person they know is still present, or if that person is fated to morph into one of the standard schizophrenia-related stereotypes: homeless, violent, or spiritually afflicted.

The Collected Schizophrenias resists these concepts; in fact, the book is a defiant, beautiful act against such a deletion. In 2013, Wang was herself diagnosed with schizoaffective disorder which, as one of the psychotic disorders known as “the schizophrenias,” combines elements of schizophrenia and bipolar disorder. In The Collected Schizophrenias, then, the vessel speaks about its own contents, story, and shape, asking deeply perceptive questions about some of the most socially stigmatized conditions in the DSM-5 in the voice of someone who not only has knowledge of the diagnosis from years spent working as a researcher, but who also has a history of engaging with the storytelling modes of film, journalism, and fiction.

Given Wang’s background as a fashion writer and the idea of the person with schizophrenia as a “misshapen vessel,” there is much here about appearances and how they intertwine with whether or not one’s story is believed. In “High-Functioning,” one of the earliest essays in the collection, Wang speaks at the San Francisco Chinatown Mental Health Clinic about schizoaffective disorder—first with a group of patients who, like her, are “high-functioning,” then with a group of clinicians. A later essay, “On the Ward,” in contrast, relates her periods of involuntary inpatient treatment, where demonstrating “insight” into one’s condition determines the privileges a person receives. Where “High-Functioning” observes the role of fashioning one’s personal appearance at the service of their story, “On the Ward” deals with how one works to fashion and hold onto her story in the face of the persistent disbelief of clinical staff, on whom she depends for release.

The first section of “High-Functioning” presents the reader with a scene of apparent contrasts inside the clinic’s waiting room. Wang describes herself as typically very put together, but today it seems she’s given extra care to her appearance. She wears an expression as “careful” as her choice of lipstick, Chanel foundation, or silk Marc Jacobs dress that “buttons up to the dip between my collarbones, finished with a tied bow”—its sleeves folded in a way she, again, describes as “careful.” She shares the waiting room with two others; one, an older woman, is in obvious psychic distress. Wang reflects that “it takes so much—too much—energy to act as though our addled minds are all right.” As she lists the clothing, education, and mannerisms that signal to others that she is high-functioning, and as she describes how clinicians try to measure levels of functionality in their patients, she conveys a sense of how slippery the concept of “functionality” is.

Wang’s treatment plan, for example, allows her to function, but could shift along with the chemistry of her brain and make employment, one of the usual markers of functionality, impossible. “[T]he psychiatric hierarchy decrees who can and cannot be high functioning and ‘gifted,’” she writes. We tend to act as though these parameters were not created by humans. The act of signaling functionality with clothing and achievement, then, can seem as insubstantial as silk.

And yet, that same fashionable appearance transmits a shifting code to each group: “When I browse the virtual aisles of La Garçonne,” Wang writes, “I am considering a uniform for a battle with multiple fronts.” Because she can pass as normal more easily than many on the schizophrenia spectrum, she’d like her outfit and makeup to project hope to this group. But in the presence of clinicians, Wang’s collected appearance takes on aspects of what she calls “weaponized glamor”—a phrase hearkening back to Chaédria LaBouvier’s ideas on how fashion can be used to upset hierarchies like what Wang experienced in inpatient treatment. Her individual style protests the ways the human being with a major mental illness can become synonymous with the condition they have.

After Wang’s talk to the clinicians, “A bespectacled woman raised her hand. She said she was grateful for this reminder that her patients were human too.” Wang counts this as a win, her fingers tracing the hem of her dress. Whether the woman was “fooled” or actually “convinced” doesn’t appear to matter: the surface presentation was effective in getting her story heard.

“On the Ward,” complicates this idea, from the perspective of the other side of the hospital doors. In this essay, Wang is not in control of the story. And yet, the piece hinges on “insight,” a term used clinically to describe the level of awareness someone has about their own condition. Insight has a large role in determining when someone is discharged from involuntary inpatient treatment. Like functionality, insight is also a slippery idea: in the absence of being able to use fashion, achievement, or other behaviors that signal that someone is high functioning, how can insight be demonstrated?

Wang quotes Nellie Bly, an investigative journalist committed to a hospital by pretending to have a mental illness; she wrote about it in her 1887 work, Ten Days in a Mad-House. Common to both Bly and Wang’s experiences is that proving one’s sanity or “insight” is both crucial and unthinkably hard. Wang writes, “[A] primary feature of the experience of staying in a psychiatric hospital is that you will not be believed about anything.” When a nurse asks, for example, her how she is doing, she says she is fine. The nurse responds: “But how are you really doing?” Later, when Wang receives her files, she sees a note—“Patient shows lack of insight.” Contradicting this memo could be evidence of “lack of insight.” How one retains their story or self in the hospital, then, is a question worth asking. Wang’s reaction to the woman at her anti-stigma talk provides two possible solutions: fooling and convincing.

Essays like the ones in The Collected Schizophrenias, with their insistence on the singular story, are another. Anti-stigma work, in part, asks us to use person-first language. We might say, for example, that a person has schizophrenia, rather than is schizophrenic, so the person’s identity does not entirely merge with their condition. In a similar way, these essays move us firmly and resolutely away from the person as a hollowed, misshapen vessel.