Home
»
Critical Essays
»
Structure and Storytelling in the Space-Age Ballet 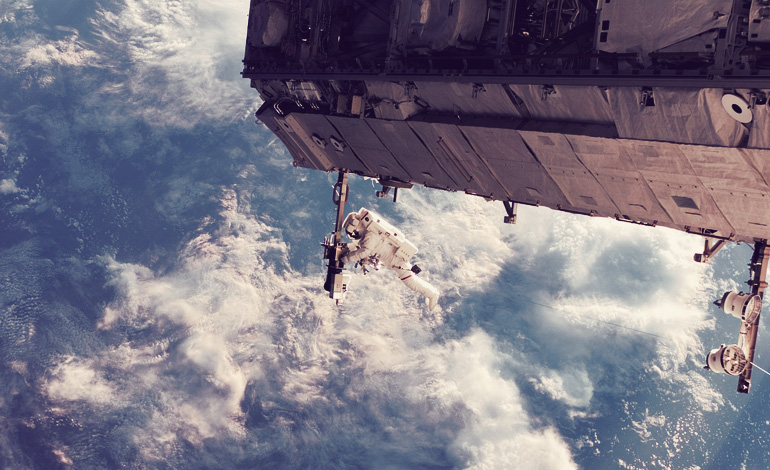 Famed ballerina Julie Kent’s first season as artistic director of The Washington Ballet is in the books. Last fall, I spoke with Kent about the intersection of literature and ballet, and what role literature would play in this season’s line-up (read the interview here).

Last weekend, I attended The Washington Ballet’s final event of the season, “Tudor, Ashton, World Premiere” at the Kennedy Center. The World Premiere—Kent’s first commission for The Washington Ballet—was timed with the Kennedy Center’s celebration of John F. Kennedy’s centennial. “Frontier” is a ballet of space exploration, choreographed by Ethan Stiefel (who, like Kent, is a former American Ballet Theatre principal dancer, and for fans of the movie Center Stage, yes, they’re the couple who dance the Romeo & Juliet Balcony pas de deux).

Attending a mixed bill night at the ballet is akin to sitting down with a story collection. Style and story vary and then knock against each other: as soon as you leave the space-age for Edwardian-era garden party (“Jardin Aux Lilas” by Anthony Tudor) you’re whisked from the land of mortals and into that of Shakespeare’s fairies (“The Dream” by Frederick Ashton). All three ballets take place against the night sky (each set against its own backdrop, depicting the moon or the heavens) and tell stories of longing (conveyed through the ballet’s structural convention of longing, the pas de deux).

“The exploration of space will go ahead, whether we join in it or not, and it is one of the great adventures of all time”: JFK’s 1962 words, projected against a starfield, open the ballet. (At the time of this writing, Trump just pulled the United States out of the Paris climate deal, which leaves one nostalgic for a president who cared about American leadership and a president who championed scientific progress.) The ballet opens with a corps de ballet of Astronaut Candidates, spacesuit-clad and training together yet vying against each other for a coveted trip to space. In a traditional story ballet, the corps provides a swan chorus, or sylph chorus; generally, a context for the heroine, be it pond-mates or lesser-sylphs. Stiefel’s ballet is faithful to this structure, and soon a heroine emerges to propel the story: an astronaut, who must leave her husband behind for a trip to space (hence they dance a departure pas de deux).

The story of space exploration itself is told visually, lit more than danced, the dancer often dwarfed by lighting choices (appropriately so when aiming to depict the universe on the stage of the Kennedy Center). Upon landing, moon, wherever—revisionism is fine when it gets us a woman there first—we’re reminded why ballet is the chosen medium. Ballet tells stories with the body. Moon, wherever: gravity isn’t the same, bodies don’t work the same. Ballet cannot be danced the same. Ballet is a medium of refinement, control—on earth. Stiefel challenges us to consider dance, and the body, under forces that can undo it all.

Several years ago, I saw a climate change ballet performed by a small DC dance troupe. It left much to be desired, with a waning sheet portraying a melting iceberg. Mr. Stiefel, your next ballet, when considering forces upon the body: climate change?