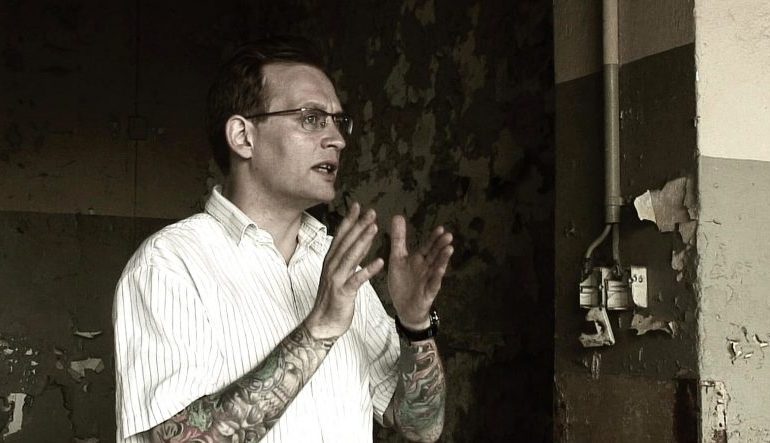 Just the other day, I was invited for coffee over at my friend Diego’s house in Mexico City. Diego was recently deported, which was how I met him in the first place, at a fundraiser for his legal fees in which he was raffling off T-shirts with a golden eagle in the middle of a Mexican flag and an upside-down American flag printed on gray fabric. When I didn’t win the raffle, I still wanted a T-shirt but was embarrassed to say so on account of it being a fundraiser—and that’s not what the fundraiser was about anyway—but the T-shirt was very cool, I wanted to buy one, and Diego said, “I could get you one if you want it that bad. I made that T-shirt myself. I have a company.” I asked him what it was called. And he said, “F*ck La Migra Printing Shop,” which roughly translates to F*ck ICE/The Border Patrol Printing Shop. La Migra. And that’s how we became friends.

Anyway, his print shop was attached to his house, and when I walked in, the first thing I noticed was a Käthe Kollwitz print hanging on the wall. He explained that it belonged to his girlfriend Valeria and that she’d bought it in Cologne, which is where Kollwitz lived for some time. It’s where the largest collection of her work is, which I didn’t know though I’m a huge fan of Kollwitz. I’d always associated her with Berlin. Berlin and then Saxony where she died—in Moritzberg—and where I lived and taught for a little bit (in Leipzig). One of the fun facts I’d always loved about Kollwitz was that where she was originally born, Königsberg, is technically Russia now (Kaliningrad), which is kind of a testament to the vastness of the then Prussian empire. In the end, it was Germans who claimed her.

When I look at a Kollwitz—even the propaganda woodcuts or posters—it always feels like standing in front of the unfiltered truth. A kind of visceral feeling that you sometimes get with expressionist paintings before Dadaism and Bauhaus took that rawness and made it into furniture or desk toys or posters that eventually inspired things you might buy at Bed Bath & Beyond. Not to discount all of it, but this is to underscore the fact that it’s intense to have a Kollwitz hanging in your living room, though I’ve always believed that living in Mexico City requires a kind of intensity. Not to get precious about it or to discount all of Mexico City either, but I can vouch from having lived there, too, that it can be a complex space to inhabit. As the writer, translator, and poet Lucia Duero has said, “Mexico City will make you worry about tomorrow while at the same time liberating you from tomorrow.”

For the uninitiated, Bricks and Mortar (Fitzcarraldo Editions, translated by Katy Derbyshire) is largely considered Meyer’s masterpiece. A tome of 672 pages, Bricks and Mortar was longlisted for the 2017 Man Booker Prize and the recipient of an English PEN Award. It chronicles the sex trade in an unnamed large city (possibly Leipzig, possibly Halle) in the former German Democratic Republic from 1989, right before the Berlin Wall fell, to the present day.

While comprised of a scattershot of voices—from prostitutes to their clients to minor players in the industry to detectives and disc jockeys—the arc is loosely focused on a single character, Arnold Kraushaar (AK), who has gone from bitplayer and football hooligan under the GDR to present-day real estate baron on the ropes, betrayed by the very people who facilitated his initial rise to wealth after the fall of the Berlin Wall.

As the monopolizing landlord to many of the prostitutes who have begun working for themselves or for larger conglomerates (many of them Turkish owned and operated) in the now legalized prostitution market of unified Germany, AK’s character is a meditation on what it means to fully embrace Western capitalism and its endgames: the complete dominance of a market through political maneuvering and buying-out of competition rather than through direct competition.

Of course, AK’s character underscores the fundamental lie sold to former East Germans of a new, meritocratic system post-reunification (and inferred morality by virtue of that). AK’s character is the darkness of that lie personified in Bricks and Mortar. And from that thread, Meyers explores—through other characters too—the dark, exploitive side of Western capitalism that largely took advantage of a vulnerable East population and its industries, detailing the true-life selling of rotten yogurt from West Germany to the East for those who “couldn’t get enough of the stuff,”or West Germans swindling East Germans out of their welcome money post-reunification, or the perpetual shaming of East Germans through ridicule and commercial exploitation, in setting certain parts of the country up as a haven that might cater to the perversions and pocketbooks of the West—everything is for sale.

In the end, there’s very little moral space between AK the GDR football hooligan and AK the professional capitalist, though the change of state has obviously changed him in other fundamental ways. And it’s not long before AK finds himself being eaten by the very gears he thought he’d once controlled, just as the new system has eaten away at a kind of normalcy that will never be again, fundamentally changing it and its people forever.

As time and politics change the state, does the state then change you? And, even then, to what degree? As a Mexican-American having grown up in Texas—a former Mexican state turned country turned American state—that question has always fascinated me. What is new and what is vestigial? What trauma is passed down and what trauma can be left behind? While some might consider Texas a kind of photo negative of the former East Germany, I think of those two states as simulacrum in many ways, politics aside.

Look no further than the names of cities like Gruene or Fredericksburg or New Braunfels that dot the Texas hill country. Or the rhythm of Tejano music. Or the central Texas variety of polvoron cookies in panaderias up and down I-35. And in Diego’s apartment in Mexico City, in front of that Käthe Kollwitz, it’s not lost on me that the famine, despair, depression, and wars depicted in those etchings are the same scenes that drove large portions of German and Czech immigrants to Texas and to other immigrant havens in America, too, in the late nineteenth and early twentieth century: Cincinnati, New York, Union City/Hoboken, and Chicago among others. It’s strange to think the descendants of those subjects that inspired those etchings have—in such a short time on this continent—grown callous to the plight of those who have always belonged to this continent, to this hemisphere, whose land has been stolen (as in Bricks and Mortar) piece by piece over centuries, and whose lives are a simulacrum, too, of those scenes depicted by Kollwitz.

In the shop, we make T-shirts, me and Diego. And we get to talking about Texas and then Georgia, where he spent sixteen years, and then country music, which he loves. He puts on Diamond Rio’s “One More Day” and plays it over this giant PA system he’s got stacked in the corner. He tells me about his son, six years old, who he’d been given custody of by the family courts just before ICE literally split them apart from the same car they were driving in, possibly forever. And when I talk to him about states, about geography, about Mexico and whether he feels more Mexican or American, he looks at me with this kind of confused look and says, “What even is that? Mexican? I’m from Hidalgo. I’m from the town where I’m from. That is who I am,” he says. And he lifts the print screen to add this T-shirt to the next in a pile of three sizes. F*ck La Migra, F*ck La Migra, F*ck La Migra.