Home
»
Critical Essays
»
Tacoma and the Stories We Leave Behind 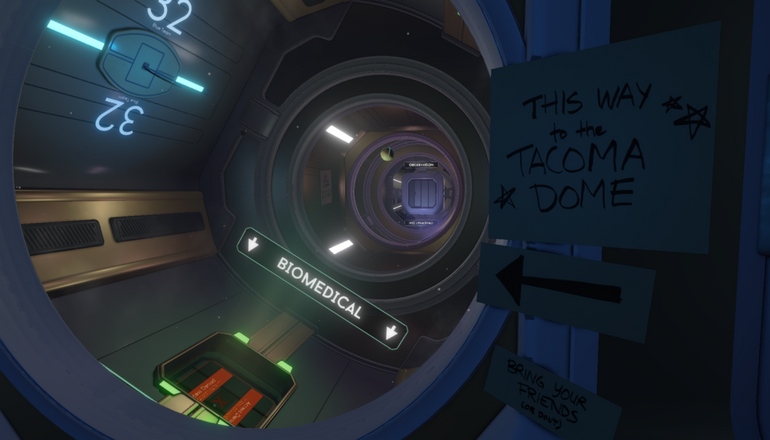 When Amitjyoti “Amy” Ferrier boards the titular space station in the recent video game Tacoma, the place is empty. What’s left behind isn’t the corpses of the previous crew, there’s no H.R. Giger-inspired monster lurking in the vents, nor an artificial intelligence gone berserk. Instead what’s left is just stuff. Party decorations that never had the chance to be taken down, work desks covered in empty cans, and garbage bins filled with unsent, half-written letters.

Through Amy we become this third-party objective observer. We poke and prod bedrooms and open drawers, read emails, and watch through augmented reality the last captured moments of the original crew of the Tacoma. The narrative here is something that is searched for and stitched together.

The new media artist, Jeremy Hight, described this method of storytelling as “narrative archaeology,” where the fictional narrative became told through the space it occupied and as a story at least partially defined by the way we navigate it. Each section of the station, from the administration quarters to the engineering bay, triggers a 3-D recording of that space. While the crew appears only as colored outlines, they move and talk in the same space as you. We follow them, pause them, and rewind their moments as each of the six crew members intersect the others from their own narratives.

Together their story is about a crew with a desperate plan in the face of a lethal oxygen shortage. On their own, there’s a father struggling to deal with sheer distance from his husband and son or a newlywed couple stuck on Tacoma because one of them wasn’t qualified for a better job even if the other one was.

The personal narratives of Tacoma are cemented through the things not shown but found. There’s a moment in Tacoma where Evelyn, the person who amounts to the head administrator of the station, meets up with Clive. They’d been not-so subtly hooking up, and when she visits his office she asks him if he thinks he’ll renew his contract with their company. She self-deprecates about their bosses not offering her a renewal, but he swoops in with a charming British accent to tell her he’d resign the next day if that happened.

This was a small, cute scene until I saw his bedroom with the crumbled rejection letters in the trash can—two of his most recent attempts at applying for a new job. He had a couple of Ian Fleming’s James Bond novels on his shelf. Frustrated letters from his successful artist mother. A gym locker with a pinned post-it with his body mass index from when he was a college football player written on it. All these personal artifacts came together to tell me that Clive was an asshole. A frustrated person in a bad place looking to feel good about something and being fine with that something being a deception.

But Clive’s story, one about unhealthy relationships formed out of a life of missed expectations, only happened because I found those things with the context of that exchange. A narrative that I defined from the details of his things.

A human life creates clutter. From the books we keep around to the letters we can never manage to throw out. Our material stuff might never define us wholly, but they are intrinsic to the narratives we present and what we can’t help but show—they are the ghosts of specificity we leave behind on the places we live.

In the novel Lovecraft Country by Matt Ruff, the main character Atticus is a black man in the era of Jim Crow who reads H.P. Lovecraft. The character’s father calls him out on reading an author as openly and virulently racist as Lovecraft, but Atticus’s willingness to suffer some bad for whatever good he finds becomes exemplary of his patience throughout the novel.

A narrative is strung over the contents of a suitcase in the short story “The Suitcase” by Meron Hadero as a group of older people try to dictate what the main character Saba should bring with her as she immigrants to America, so she can pass them on to their families. An older woman Wurro tries to convince Saba to bring her niece “gunfo,” this Ethiopian bread dish, because her niece had a trouble pregnancy. The gunfo then isn’t just a bread dish but a tradition, a history that’s been cut off in a foreign land. An example of a practice and that woman’s desire to continue.

Through specificity of objects, we define characters and ourselves. I spent time in Tacoma combing through every character’s bookshelf in their bedroom. I paid attention to the engineer whose shelf was filled with mostly art books. The AI specialist who, despite never really appearing to take anything seriously, has a dedicated library of instructional and scientific books related to her job (even if she did have a secret spot where she’d goof off and read science fiction). Evelyn had a well-marked copy of The Bell Jar in the wake of the loss of her sister, and the station’s medic had taken to reading books on mindfulness and poetry to deal with the loss of a previous patient.

Everything a character or a person does leaves shock waves in their lives. Our apartments and houses are filled with the ghosts of our experiences, the people we’ve been, and the people we want to be. It’s the paint we put on the walls, the yoga books we never open but regardless how the details manifest make us feel—they’re there to remind us that we were here.