Home
»
Critical Essays
»
Take a Turn for the Worse: How We Write About Ghosts and “Goneness” 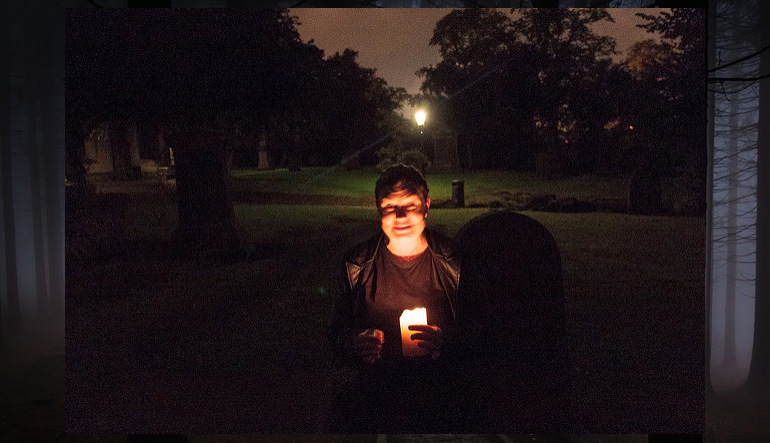 Every good ghost story has a volta, a point at which the narrative dramatically changes, and reality turns toward paranormal chaos. At least that’s what I’ve been telling myself. Right now I am working on a series of poems about ghosts, many of which take on or toy with the form of a sonnet, but I’ve never enjoyed horror as a genre. As a kid, I couldn’t sit through even the campiest of scary movies. I had nightmares for weeks—if I slept at all—after my cousins made me watch a doll named Chucky somehow kill multiple full-grown adults in Child’s Play. When I was in middle school, a group of goth kids I wanted to get in with invited me to see Resident Evil: Apocalypse. I walked out of the movie theater during the church scene and called my mom to come pick me up. Just this year I saw Get Out but only after reading spoilers online. (It was incredible. Go see it.)

In other words, in writing these poems, I’ve realized I don’t know many fictional horror stories. But I have always been interested in the use of a ghost as a storytelling device and the way haunting and paranoia remind us of questions we’ve left unanswered. Or answers we want to ignore.

In “Introduction to Quantum Theory,” Franny Choi lists a number of “parallel universes” in which the vivid horrors of our own universe aren’t occurring. Alluding to the many-worlds interpretation of quantum mechanics, the poem becomes a litany of other possibilities. “There is a universe in which no one is lying // emptied in the street as the gas station burns,” and another where “no one gives birth // chained to a hospital bed, and no one’s child washes / blue, ashore.” The poem’s inevitable turn comes in the tenth stanza when the speaker reminds the reader that the existence of alternate realities does not negate this one.

Sure. You can have these worlds.

You can warm them in your hands at night. But know:
by signing, you agree also to be responsible for the universe

where the oceans glow red, the universe where
what we call shadow is pulsing with the musk

The horror, the speaker seems to be saying, is not the ghost, but the absence of it in these other histories; the horror is the possibility of a different outcome. It haunts the universe in which the reader encounters the poem, the same one in which I write this. What is a ghost if not a proposal for an alternative ending?

A few weeks ago, I went on a ghost tour in downtown Boston. The guide led our group to a handful of places where various paranormal phenomena had occurred, including the infamous Omni Parker House Hotel. At one point we stopped in front of an unremarkable falafel place. In the mid-1800s, the guide explained, this was the location of a jewelry store where William H. Mumler worked as an engraver and amateur photographer. After Mumler’s deceased cousin appeared in the background of a self-portrait, the jeweler abandoned his trade in favor of what came to be known as spirit photography. He spent the 1860s and 70s taking photographs that featured his living subjects alongside apparitions of their dead relatives or loved ones. In the aftermath of the Civil War, Spiritualism grew in popularity, and spirit photography was only one of many ways in which people tried to communicate with the dead. Mumler’s “skill” was in high demand. While other photographers were known to use double exposure or even live models to create their ghostly images, the jeweler-turned-photographer maintained his work was the real deal. And, at the time, no one could prove otherwise.

Around 1869, Mumler was visited by a mysterious woman wearing a black veil over her face and a man claiming to be her aid. The woman did not speak, but her aid insisted that Mumler, who was quite busy at the time, needed to take her photograph. Intrigued by the mysterious pair, Mumler agreed and started setting up his equipment. When he asked who the woman hoped to see in her picture, the man wouldn’t say. Instead, he explained that as soon as the photographer was ready, he’d leave the studio, and the woman would uncover her face. If Mumler didn’t know who his subject was looking for, I thought, standing there on the busy, Friday-night sidewalk, he couldn’t fake it. Mumler gave the word, and the man left the room. The small woman lifted her veil, revealing herself to be Mary Todd Lincoln.

At this point in the story, everyone on the tour gasped. The guide pulled a wrinkled copy of Mumler’s most famous photograph out of her messenger bag and passed it around. It shows a stout, almost-smiling Mary Todd and, faint yet unmistakable in the background, her husband’s ghost. His hands rest on her shoulders. “She knows,” I couldn’t help but yell, “She knows he’s there.”

Like “Introduction to Quantum Theory,” this story is compelling because it does not depend on the question of whether or not there is a ghost. Even if we believed Mumler to be a fraud, the audience knew what would be in the photograph he produced. Seeing the ghost was a certainty, which means we were not afraid of it. We were afraid of what we did not know. We were afraid of the woman’s identity, of why we would see the ghost in the photograph. What is a ghost if not, as Elizabeth Robinson writes in On Ghosts, a linguistic representation of “goneness,” a way we tell a story about absence?

Like the volta in a tradition sonnet, the turn in a ghost story can point toward an answer to the central question of the narrative. In the account of Mumler’s photograph, the moment Mary Todd shows her face offers up the same kind of “release” that writer and literary historian Paul Fussell described as “indispensable” in the sonnet. “The turn is the dramatic and climactic center of the poem,” he explained in Poetic Meter and Poetic Form, “the place where the intellectual or emotional method of release first becomes clear and possible.” On the other hand, ghost stories tend to deny release until the last possible moment. Chucky gets set on fire, maimed, and shot before finally, maybe dying at the end of Child’s Play.

In Choi’s poem, the volta denies release altogether by proving the problem unsolvable; alternate realities exist only alongside our own. That is to say, in this story, the volta turns the reader not towards an answer, but back towards the question. If other outcomes are possible in “parallel universes,” how did the horrors of this one happen? As I grapple with the ghosts floating in the background of my own work, I’m trying to let their stories turn me back towards the questions. What is a ghost if not another way to ask what happened, what have we done?