Home
»
Reading
»
Takin’ It to the Streets 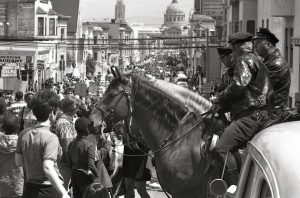 The last few months have consisted of an exhaustive and seemingly nonstop vicious news cycle that has not only ignited cynicism in the most resilient of folks, but has left us feeling helpless as well. From the sexual assault allegations that have exposed a slew of celebrities who have been engaging in reprehensible acts for years (Harvey Weinstein, Louis CK, Kevin Spacey, Russell Simmons) to an actual slave trade taking place in Libya, there has been a frenetic call to action denouncing a culture that promotes racism and sexism so openly and without a second thought. It only seems natural to want a temporary escape from our current state of affairs, and as an avid writer and reader, books seems like the obvious answer. But is it the correct one?

Using reading as an escape during such a tumultuous political and social climate feels both indulgent and yet completely necessary. On one hand, the Trump administration―which is plagued by gross violations of women’s rights, racism, fractured international relations, and a complete disregard for Constitutional rights―has produced the kind of fear and trauma usually reserved for horror films. Among all of the unmitigated outrage festers a certain amount of guilt: how can we affect policy and start real change while feeling so helpless? Reading, no matter how light and fruitless it may sound, can be extremely informative, and has the power to shape and influence minds―it just depends on what you choose to read.

Enter the 1995 anthology Takin’ It to the Streets, a collection of speeches and articles covering social, political, and cultural issues during the 1960s. While it features some widely known essays (Malcolm X’s “The Ballot or the Bullet,” Gloria Steinem’s “What It Would Be Like if Women Win”), lesser known bodies of work that address critical issues that are still relevant in 2017 are also included (Frances Beal’s “Double Jeopardy: To Be Black and Female,” Barbara Susan’s “To Whom Will She Cry Rape?”). The table of contents is broken down by moments that shaped the 60s, including the Civil Rights Movement, Black Nationalism, Women’s Liberation, and responses to Vietnam that sparked the antiwar movement. The articles featured in Takin’ It to the Streets answers the need to read as a form of coping while still having deeply pertinent undertones.

In the essay “Black Art and Black Liberation,” author Larry Neal addresses the state of Black America in a way that is evergreen: “We are constantly forced to see ourselves through white eyes. We are made to evaluate our innermost impulses against theirs. And in the process, we do ourselves great spiritual and psychological harm.” “The Woman-Identified Woman” by Radicalesbians was a manifesto that tackled sexism head on: “By virtue of having been brought up in a male society, we have internalized the male culture’s definition of ourselves. That definition views us as relative being who exist not for ourselves, but for servicing, maintenance and comfort of men.” Both pieces mirror issues and conditions that continue to saturate American culture, policies, and beliefs.

This compilation―which was edited by professors Alexander Bloom and Wini Breines―is vital. It serves as a historical text documenting life, policies, and movements from the 1960s. It is extremely comprehensive and detailed; the range in subject matter is so vast that the compilation virtually leaves no topic unexplored. By discussing and analyzing such vital and contentious topics, it allowed dialogue to occur that would eventually evoke change. It also confirms something that many of us have already known; we are still dealing with and fighting against the same issues for decades. Racism and anti-blackness is as rampant as it’s ever been. Women are still proclaiming rights and control over their bodies. The idea of America engaging in yet another war still sits at the back of our minds.

Reading doesn’t have to always just be a convenient escape. As “Takin’ it to the Streets” proves, it can be something that helps put things into a better perspective. The consumption of an anthology like this serves as a glimpse into the political, social and cultural climate of a different era and reminds us of our unmitigated resolve: we have seemingly been engaged in the same fight for decades. It also shows that some battles take longer to win. What Takin’ it to the Streets encourages is self-awareness and the kind of interrogation necessary to improve both ourselves and society as a whole. The feeling of powerlessness―especially as we press on to hear more shocking and downright depressing news―can be overwhelming. It’s nice to know that literature, especially one that elevates marginalized voices, can be our fail-safe.

Tags:Takin It to the Streets