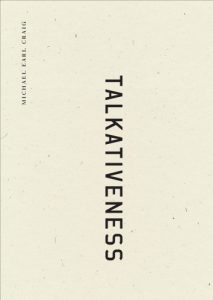 If you were among those persuaded by Thin Kimono (2010) that Michael Earl Craig was a poet to watch, you may consider your intuitions confirmed. Talkativeness dwells a little more deeply in the voice of that earlier volume, becoming more at home in it, but still capable of surprise.

Craig’s territory is contiguous to the domains of Ashbery, Tate, and Dean Young, but a little further off the interstate, a little lonelier. The natives are kindly but unlikely to offer help unless asked. For that matter, you might get further by simply paying closer attention.

The book’s epigraph, from Yamamoto Tsunetomo, states, “No matter how good what you are saying might be, it will dampen the conversation if it is irrelevant.” But—the following volume seems to ask—how confident can we be that any remark is irrelevant, when it may connect intimately to the topic at hand by unguessable, labyrinthine subterranean channels? How do we know that the apparently tangential is not, in fact, the royal highway to the real?

The title of the volume’s longest poem, “Perhaps You See Where I Am Heading”—ten sections, each comprised of two five-line stanzas—suggests that if we truly used our eyes, the seeming indirection of passages like this one (section six) would resolve into a flight as true as an arrow’s:

“Dale’s description of the Rapture burned a small

hole in his diary. A kind of meat milk was served,

Chinese rubber dongs cooled on a rack. There was

a market for them. If you think about it,

the best way to bring slippers into the house is

to go over to them, and step into them.

I have grown tired of the Chisholm Trail.”

The reader can choose his or her own venture here—mine is that the Rapture is gathering us for a journey, for which we will need an expert guide (the Sherpa), but aren’t we tired of being herded like cattle? Wouldn’t we rather bounce erratically, unpredictably, like a dropped guitar pick, take our slippers back into the house (with its meat-derived milk, its goofy rhymes), and wait for the dongs to cool?

“Perhaps you see where I am heading,” the poem ends. Perhaps I do, I answer, perhaps I do not, but I am willing to go along with a companion like you wherever you are going.