Home
»
Book Reviews
»
Fiction
»
Tears of the Trufflepig by Fernando A. Flores 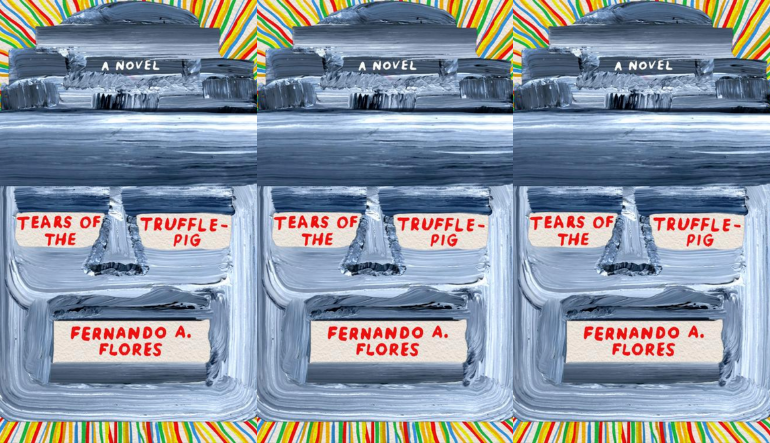 It is a truth universally acknowledged that a hero possessed by a novel must have a goal. Fernando A. Flores, however, does not give the hero of Tears of the Trufflepig a goal. Then again, Esteban Bellacosa isn’t really a hero. Nor is he an anti-hero. He’s a middle-aged widower floating between past and present, drifting to and fro over the South Texas–Mexico border. His wife and young daughter years dead, his parents long gone, and his brother estranged, no ties bind him; his home is a rented shack on a rich woman’s land, and he scouts, freelance, for second-hand heavy construction equipment. Things happen to him, fortuitously or accidentally. Making decisions, taking action, getting shit done—not his forte.

Tears of the Trufflepig no more offers a straightforward plot than its protagonist moves along a clearly determined path, but it has a fascinating premise: in a near-future world, a technique for speed-producing fruits, vegetables, and livestock has ended a food shortage. “Filtering,” as the process is known, is eventually restricted by law to fruits and vegetables, giving rise to criminal enterprises that filter animals—and resurrect extinct species—to be consumed as drugs, hides, and furs, and to be cooked up as gourmet meals for secret food clubs patronized by the ultra-wealthy. An ill-fated expedition to secure a machine “used to dig up large holes in the ground” entangles Bellacosa in a powerful syndicate whose tentacles of influence sprawl in all directions, and whose sinister and audacious ambitions materialize what could be the ultimate drug: the “shepherd of dreams” trufflepig, a mythical creature, conjured by indigenous shamans themselves supposedly extinct, with the body of a pig, the hide of a crocodile, and the beak of an eagle.

An accretion of off-center details builds this underworld that threatens Bellacosa’s own border-place existence. He visits a farm, for example, where insects literally undermine the ground he stands on—just as crime syndicates hollow out communities, destroying traditional livelihoods while offering lucrative employment possibilities:

Everywhere he looked, there were veins of army ants draining the land itself of blood from right under them. The dried field where the onions had once grown was cracked, pallid, and tubercular. Through his peripheral vision Bellacosa thought he saw the earth shifting, felt like it was being encircled by an invisible army. It bothered him how confidently the ants carried that dead chicken, and whereas earlier he was confused as to why the farmer hadn’t stopped them, now he understood. Death was the order of the day.

Though Bellacosa’s longing for his deceased wife and daughter lures him toward death and to the trufflepig’s promise of sweet dreams, he doesn’t enter this underworld so much as drop into it. He follows one eccentric story after another, landing in situations that, in Flores’ vivid settings, blend noir with magical realism. True to noir, Tears boasts a cast of shady characters, including the suited crime boss; grungy, obscenely rich decadents; and a police detective busy working deals on both sides of the border. Things (big, big things) disappear. Dead bodies, some still walking and talking, are found. A frowzy investigative journalist scours old library books for clues to the syndicate’s plan, only to find whole passages laboriously blacked out. Bellacosa’s brother goes from estranged to missing.

Time and again, Bellacosa’s personal goals (and thus potential plot threads)—to deliver the earth-digger and collect his commission, to probe the mysterious nature of the trufflepig, and, most importantly, to find and reconcile with his brother—are derailed by a rolling wave of oddballs with their own agendas. While such a passive protagonist may not promise much for moving a novel along, Bellacosa is good company for the reader, refreshingly gentle and loving in a fictional and real-life terrain scarred by abysses of cruelty and greed, where kindness is distrusted or dismissed as boring and naive. Bellacosa is manly and tough, but he doesn’t prove it by harassing women, shooting guns, or punching other men in the face. He’s interested in finding out where people are coming from.

Holding on to the many, many threads Flores winds around Bellacosa can, however, be a big job for the reader. Intricacy runs close alongside chaos in Tears of the Trufflepig. A statement embedded in a rambling monologue (delivered to the journalist by a fellow who darts in and out of the book a couple of times as something of a deus ex machina) captures the reader’s dilemma: “Everything’s woven closer than you think, Mr. Herbert. Only it gets hard sometimes to add it up.” The key is just to go along for the ride. And why not? It’s what Bellacosa does. His quest may be meandering and bizarre, nightmarish and heart-rending, but the journey is well worth taking.

Tags:Fernando A. Flores, Tears of the Trufflepig