Home
»
Interviews
»
“Ten Pounds of Potatoes in a 10-Pound Bag”: An Interview with Eileen Pollack 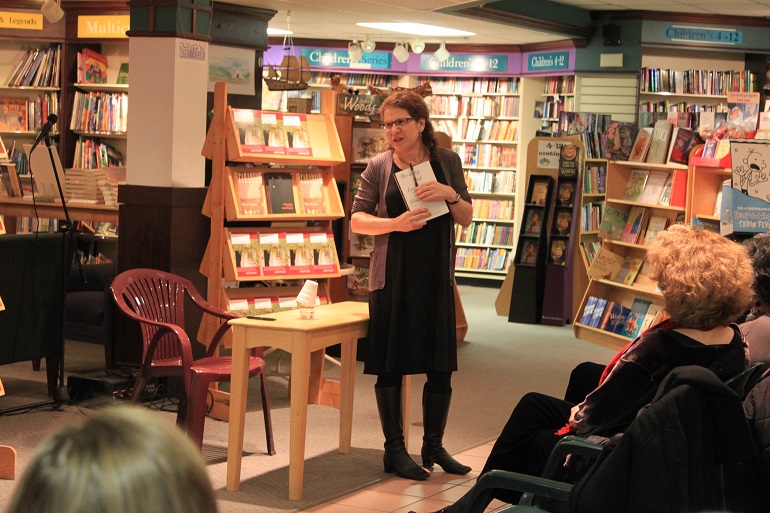 Eileen Pollack’s stories are smart, big-hearted, and thought-provoking. They are easy to read and hard to put down. Her numerous books include the novels A Perfect Life, Breaking and Entering, and Paradise, New York, as well as two collections of short fiction, In the Mouth and The Rabbi in the Attic, and the nonfiction books Woman Walking Ahead: In Search of Catherine Weldon and Sitting Bull and The Only Woman in the Room: Why Science Is Still A Boys’ Club. She teaches in the MFA program at the University of Michigan. We recently caught up via email to discuss the differences between novels and short stories—and how changes in society can help novels find their audiences.

Matthew Thorburn: Would you talk a little about your writing process? How does a story start for you? And as someone who has written and published novels and short stories, how early in the writing do you know which of those modes a new piece will fit into? Do they feel different?

Eileen Pollack: Most of us, I think, get an idea for a story or a novel when we hear or read something that strikes a resonant chord, no doubt because the characters remind us of people we know or the setting seems particularly alive for us. (In a way, a writer’s own character can be defined by which notes from the world around her strike resonant chords within and inspire stories.) What I also need is a spring, a “what if,” something that propels the character who interests me into a narrative. Does this person desperately want something? Is someone begging the character to do him a favor? Does the character find herself caught between two prongs of a dilemma? Has an event disrupted the equilibrium in the nice, sedate world in which the character initially feels at home?

I don’t need to know how a story or a novel will end; I only need to know what the spring is that propels the character into action. I need a first domino to fall, so I can sit there and watch that domino hit another domino, and so on.

If there’s only one character’s arc of desire (or conflict) to follow, then I’m writing a story or a novella. But if more than one character seems important, if the arc isn’t simple, if several important characters are struggling to achieve their differing desires, then what I’m looking at is a novel.

My teacher, James Alan McPherson, worked in a grocery store as a boy, bagging potatoes. He told us that after a while he could tell without weighing the potatoes how many would fit in a five-pound bag and how many would fit in a 10-pound bag, and it wasn’t doing the customer any favor to try to shove 10 pounds of potatoes into a five-pound bag or to shortchange the customer by putting only five pounds into a 10-pound bag. That’s how it is for stories and novels. After a while, you just know how many potatoes you have, and you try not to stuff too many into any one story, or write a skimpy novel that will leave your readers feeling shortchanged.

MT: How did your most recent novel, A Perfect Life, get started? What was the first spark of this story for you? And how did your protagonist Jane Weiss come into being?

EP: Back in the 1980s, my ex-husband was working on his PhD in a genetics lab at MIT. One of the other researchers was a woman named Nancy Wexler, who was part of the team that was hunting for a genetic marker for Huntington’s chorea. No one had ever found a genetic marker for a disease, and it wasn’t at all clear that the search would succeed. What I found most moving was that Nancy’s mother had died a terrible death from Huntington’s, and that meant Nancy herself ran a 50-50 chance of having inherited the gene. She had decided not to marry and have children unless she knew for certain that she wasn’t going to come down with Huntington’s or pass the gene to the next generation. Her predicament struck me as both noble and horrifying. What if she didn’t find a test for the gene? What if she did? Any character with a quest like that, especially a quest that is governed by a ticking clock, is going to be worthy of a novel. I also knew that the general public hadn’t yet grappled with the idea that someday we are all going to be able to test our genes to see what diseases we have inherited, or design the genetics of our children. What might it mean to design a perfect child? To marry the perfect person? To lead a risk-free, perfect life?

MT: I also want to ask about the interplay between your fiction and nonfiction writing. In A Perfect Life, Jane is searching for the genetic marker for Valentine’s Disease. In your nonfiction book The Only Woman in the Room, you examine the barriers to women’s success in the hard sciences. Did one of these books inspire the other?

EP: I wrote A Perfect Life a long time ago and (should I admit this?) couldn’t get it published. An editor told me that men wouldn’t read fiction written by a woman, and that women’s book clubs would be scared off by any novel that had any science in it. (Basically, if you know what DNA is, you can understand and enjoy A Perfect Life.) While it’s true that I kept editing and improving the novel, what really changed was our society. By the early 2000s, people were becoming more interested in the reasons there are so few female scientists. To figure out why that’s true (using my own background in physics as a start), I wrote The Only Woman in the Room. At first, that was a hard sell, too. Then an excerpt from the book came out in The New York Times Magazine and went viral. Suddenly, everyone seemed to be talking about women in science. My new agent sent around A Perfect Life, and this time every editor in New York seemed eager to buy it.

EP: I have a raunchy comic feminist murder mystery called The Bible of Dirty Jokes coming out next year. And I’m working on a novel about a female professor who studies the future—her specialty is immortality—and who thinks that one of her former students might have become the Unabomber.