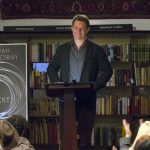 While Showtime’s The Affair has been praised for its incisive exploration of the unreliability of memory, particularly in romantic relationships, some of its most insightful commentary is on the contemporary literary community. The widely-hated protagonist, Noah Solloway, is not only a typical entitled antihero, but is the prototypical white male literary darling.

Between Don Draper, Walter White, Dexter, House, and so many more, prestige television viewers are no stranger to the “tortured asshole” archetype, the privileged white male antihero who finds himself sinking into a moral quagmire as a result of a childhood trauma or current infirmity. But unlike Walter White, who discovered he was dying of cancer, or Dexter, who witnessed his mother being murdered when he was four years old, Noah Solloway’s troubles at the beginning of The Affair are much more mundane: he hadn’t written a bestselling novel.

Before the first season began, Noah wrote a little-read, high-minded first novel called–descriptively–A Person Who Visits a Place. He takes for granted that his book was a work of genius, and assumes that no one read it because it was “literary,” and not because it was as generically pretentious as its title. He becomes existentially dissatisfied because he’s living off his in-laws’ money, he’s in a stable—if unexciting—long-term marriage, and the world hasn’t seen fit to recognize his genius yet.

Then, over the course of the show, he writes a prurient-yet-literary work of upmarket fiction: a prurient thriller about an extramarital affair/murder (that’s totally, 100% not based on his own life) called Descent. While we’re obviously not able to read this book, we are privy to a couple of excerpts that are quoted in the show:

“He lifted her skirt just an inch. He paused. They listened together to the sounds of the marina, hearts shaking in their skin.”

“She was sex. The very definition of it. She was the reason the word was invented. No marriage, no matter how strong, could survive her.”

It’s difficult to judge quotations from a novel out of context, but at the same time, these excerpts are pretty terrible. Even disregarding the gender politics implied in the passages, they’re cliched at best and embarrassing at worst.

And yet, I can still imagine the book receiving the accolades that it does on the show, because Noah is exactly the kind of person who becomes the “next big thing” in the literary community these days. He is, yes, a privileged straight white male. He name-drops Jonathan Franzen, Philip Roth, and of course, the sagacious Ernest Hemingway. He lives in New York City, and uses Jonathan Safran Foer and Nicole Krauss’s divorce attorney because “now they live in adjacent brownstones in Brooklyn!” He expresses horror and disgust at his conservative in-laws’ views, but then says things like, “As a straight white man, I am automatically disqualified from winning the PEN/Faulkner… it’s impossible to be a man in 2015!”

In other words, he’s insufferable. He’s every contemporary white male New York City-based wunderkind (usually named Jonathan). He’s exactly the kind of writer mainstream literary critics would love, and contrarian book reviewers at prestigious, socially conscious universities love to hate. So it makes perfect sense that Descent is brutally panned by a student newspaper, leading Noah to get into a bar brawl with the writer and subsequently be dubbed “the new bad boy of American letters.”

Funnily enough, the character was created by a woman, showrunner Sarah Treem. And even more interestingly, Treem told The New York Times that the writers don’t love to hate Noah like the rest of us do:

“People are always like, ‘You must hate Noah.’ And I’m like, are you kidding? Noah is me. I love Noah. And, actually, I think the whole writers’ room feels that way. We are Noah’s biggest fans because he’s the character we most identify with.”

It’s unclear whether any satirical interpretation is intentional. The Affair is a straight drama, no question about it, and the character may just be hilariously cartoonish as a result of the archetype he exemplifies. But whether accidental or not, Noah Solloway is the most accurate, and therefore most effective, satire of white male literary darlings I’ve ever seen.