Home
»
Critical Essays
»
The Alchemy of Science and Storytelling 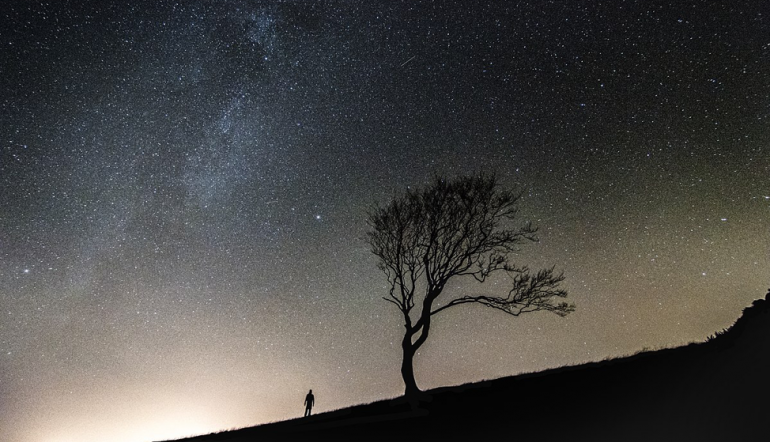 Hiking inside the Hoh Rainforest of Washington earlier this summer, I stopped for a moment, remembering Robin Wall Kimmerer’s descriptions of immersing herself in wilderness and taking time to listen. Gradually, my ears attuned to the fall of mist and birdsong around me. I knelt low to observe the tendrils of mosses, droplets of dew, and soft crumbles of soil spilling off glistening mushrooms. My walk among the towering ancient cedars took on new meaning after reading Braiding Sweetgrass, with Kimmerer’s words—like these ones—having seeped into me:

Here in the rainforest, I don’t want to just be a bystander to rain, passive and protected; I want to be part of the downpour, to be soaked, along with the dark humus that squishes underfoot. I wish that I could stand like a shaggy cedar with rain seeping into my bark, that water could dissolve the barrier between us. I want to feel what the cedars feel and know what they know.

As a writer and botanist, Kimmerer weaves lyric storytelling with science, gleaned from both Western institutions and the indigenous wisdom of the Citizen Potawatomi Nation to which she belongs. Throughout Braiding Sweetgrass, she achieves a beautiful alchemy in the language between the technical and the poetic, whether she is describing the Anishinaabe word Puhpowee (the force inherent in mushrooms that propels them to rise up through the earth overnight) or exploring sugar maples, water lilies, old-growth forests, and lichens.

Kimmerer discovers how science and storytelling strengthen and enhance each other like braided threads. The Native American story of “the Three Sisters” illuminates the science behind the harmony of corn, bean, and squash, a trio of seeds that thrive when planted together. The science of why goldenrod and asters grow in proximity—creating a vivid contrast of color that attracts bees—helps explain Kimmerer’s awe of the striking purple and yellow hues and her intuition that a deeper reason lay behind their pairing. Where there is beauty and mystery, Kimmerer finds the science, and vice versa, in a language that both informs and enchants.

After meandering the trails of the Pacific Northwest, I left for Maine, accompanied by another book by a scientist and writer, Alan Lightman’s Searching for Stars on an Island in Maine. Again, the fusing of science and storytelling sent me deep into thought and heightened my sense of my surroundings. On a night gazing up at glimmering constellations from the driveway of my childhood home, I experienced a similar sense of plunging into infinity and weightlessness that Lightman recounts from a time he lay alone in a boat beneath a moonless sky:

I felt an overwhelming connection to the stars, as if I were part of them. And the vast expanse of time—extending from the far distant past long before I was born and then into the far distant future long after I will die—seemed compressed to a dot. I felt connected not only to the stars but to all of nature, and to the entire cosmos. I felt a merging with something far larger than myself, a grand and eternal unity, a hint of something absolute.

Lightman presents physics-related theories, discoveries, or inventions throughout his book, with science and story joining forces to push the reader toward deeper and bigger questions: What is the meaning of life? Where do we fit in the universe? Like Kimmerer, he retains a childlike wonder at each quandary and a reverence for the “beautiful and mysterious order underlying the world.”

Lightman and Kimmerer take science writing well beyond the technical, infusing riches of reflection and beautiful prose. Their melding of roles as scientists and storytellers remind me of Rachel Carson and her ability to transform her scientific observations of the sea, land, and sky into the compelling lyrical works that helped launch the environmental movement in the 1960s. Carson understood, too, as she expressed in her acceptance speech for the National Book Award for The Sea Around Us, that writing on scientific subjects could indeed reach into the realm of the poetic:

The winds, the sea, and the moving tides are what they are. If there is wonder and beauty and majesty in them, science will discover these qualities. If they are not there, science cannot create them. If there is poetry in my book about the sea, it is not because I deliberately put it there, but because no one could write truthfully about the sea and leave out the poetry.

Whether looking up at ancient cedars or the stars, out at the ocean or down at the mosses and mushrooms from the earth, I cherished the kinship and wisdom of the scientists whose words I carried. They spoke a language I could understand, probing the mysterious while showing me new ways of seeing the world.