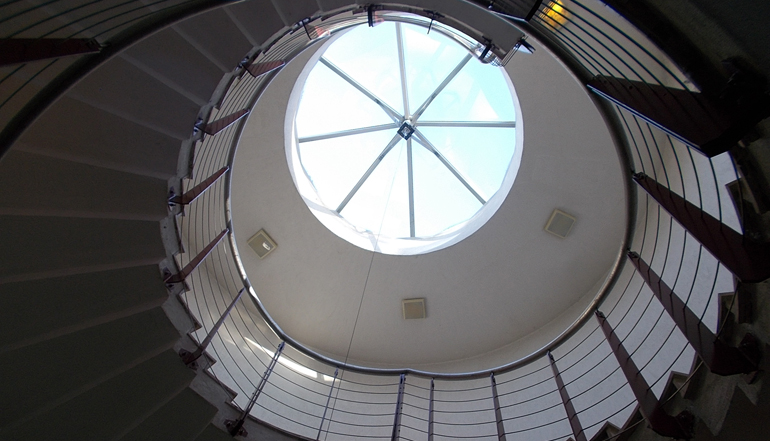 It’s one of the oldest tropes in poetry: a speaker walking a path, a trail, a road, a hill, a set of steps. The symbolic weight of this walking is instantly recognizable as a symbol of life’s journey, the way we move forward through time and what we learn and accumulate as we go. Recently, I began thinking how some of the poems I love most evoke this sense of motion; in particular, I began thinking about two pieces about the act of climbing: Langston Hughes’s “Mother to Son” and Carl Phillips’s “The Pinnacle.” How do these poems so successfully embody a sense of upward movement despite moving on the page linearly, as traditional poetry does?

In “Mother to Son,” Hughes adopts the voice of a mother giving advice to her child. She uses the metaphor of the staircase for her life. Unlike someone with privilege, whose life might be likened to a “crystal stair,” her path has been harder, filled with “splinters,” “tacks,” and “bare” spots. Her message to her son, like her diction, is straightforward: keep climbing. Don’t give up.

But part of Hughes’s brilliance is the way in which the lineation, the syntax, and the pacing of the poem all evoke an arduous upward climb. The lines are extremely short—in one case only one word long—and frequently employ commas to flag pauses, both of which slow the pacing dramatically. Hughes also starts seven of twenty lines with “and,” including two sets of three lines in a row that begin this way. We feel the plodding, difficult task of putting one foot in front of the other, the exertion and exhaustion in each additional “and.”

Carl Phillips’s long poem “The Pinnacle” is also about two figures ascending, in this case two on a walk coming across a path with a way forward that is uncertain. Like the Hughes poem, Phillips uses lineation as a major technique to evoke forward motion. From the beginning, the lineation reflects the speaker’s uncertainty. The first line breaks off before the reader is able to discern what the pair’s action will be regarding their walk: “Having found a trail we / but followed.” The suspense created immediately by not revealing the action until the second line sets the tone of hesitation that continues with the speaker’s uneasy admission that “I kept / stopping to ask which way / from here.” The short tercets visually resemble small footprints continuing down the page, but their disruptive lines mirror a continuation forward that is anything but fluid, smooth, or certain. The speaker’s companion, though, who follows the speaker, is seemingly unconcerned with their direction or progress. Phillips uses lineation again to call attention to the difference between the two people: “Each time // I looked back, you weren’t / stopping, you were / following, you were not // asking questions.” The lineation brings the three actions (not stopping, following, not asking questions) to the surface—we know that the lack of clarity the speaker experiences is emotional as well as physical.

As Phillips continues to chart the physical course of the two travelers as they ascend the path—which has become now “more clear”—his attitude toward his companion becomes clearer. This serves on the one hand to clarify the symbolic or allegorical importance of the journey and the path to the pair’s relationship. It also, for the middle section of the poem, smooths out the pacing, which, though still slow, is steady; the syntax and lineation are much less disruptive. Phillips’s tone turns more tender, and he uses an obviously disrupted syntax only once to comical effect: “a hardness of / breath that you said had // less to do with altitude / than with shape, our / being out of.”

In the last third of the poem, there is a final shift in the usage of syntax and lineation, signifying an acceleration of pacing as the poem reaches its climax and as the pair physically near the pinnacle of the poem’s title. Lines lengthen slightly and gain more strength, the speaker declares himself to feel “more sure” that the pair’s ascension will lead to a pinnacle and end. Gone is the uneasiness with the partner’s contrasting way of progressing; in its place are lines that are strongly broken to communicate the strength of the speaker’s acceptance: “[T]he pinnacle we’d been // told the trail led to would / come, the trail would end / in what they usually do // a view.” The syntax also supports the lineation here, in which clauses are constructed to keep readers reaching for resolution; the clause that begins with the pinnacle is completed by the satisfying predicate (“would come”) two lines later, and the resolution of how the trail would end is deliberately withheld in the sentence, so that the entire sentence opens up at the end, just as the trail does.

Both Hughes and Phillips do what all poets attempt and few achieve as successfully: taking a well-worn poetic path and infusing it with nuance and newness. With the poets as our guides, we readers ascend along with them; the poems have been our engine.