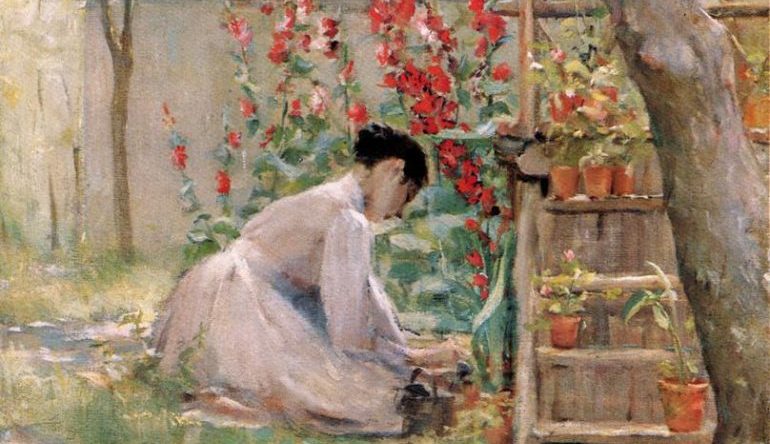 A good friend of mine has a theory about the fundamental difference between poets and fiction writers: Poets have hobbies and fiction writers don’t. He happens to be a fiction writer and of course has no hobbies. As further evidence, he names another friend, a poet, who’s a black belt in karate, an expert woodworker, and a tango dancer. “Makes me tired just thinking about him,” my fiction writer friend says, stretching out on his couch with The Stories of John Cheever, Roberto Bolaño’s 2666, or some other book so massive he’s got to prop it on his knees.
I’m pretty sure my friend’s theory has less to do with medium than temperament, as I know plenty of fiction writers with hobbies–one who comes to mind is a table-tennis champion, another is obsessed with roses–as well as at least one extraordinarily lazy poet. But for many years I shared his aversion to most activities other than reading and writing and watching movies. Anything else was a distraction, I thought, something to co-opt my precious time. The only hobby I could have claimed was hiking, which can’t truly be called a hobby, at least not in the way I approach it, which is to suddenly find city air suffocating, and in a panic drive into the mountains without enough food or water or warm clothes, pick a trail at random, charge up it until I’m so far from my car that I’m not sure I can make it back before nightfall, and then return to civilization famished and exhausted, newly satisfied with the comforts I’d left behind.
Unlike me, my wife has always been someone to throw herself into hobbies with abandon, never worrying that they might get in the way of other pursuits. Though Alexandra is an artist and professor, she’ll spend whole days working on her garden, making elaborate diagrams, studying plant combinations in books and magazines, dividing perennials with pitchforks or moving them from one bed to another. One day last fall, while I was at my desk working, I heard the chainsaw start up outside and poked my head out the door. “Be careful,” I called. “Don’t do any of the big stuff until I can come out to help.” An hour later, Alexandra came in flushed, smiling maniacally, and when I looked outside, the front yard was decimated, the overgrown camellias and rhododendron taken back to stumps, branches as thick as my thighs strewn across the lawn. “I love chainsaws,” she said.

When we first got together, she owned a house, and I lived in an apartment, and her yard was a paradise to me, where I could read for hours and fall asleep in the sun. I’d occasionally help out with one of her projects, digging holes, moving mulch, putting in an hour here, an hour there. It was a nice way for us to spend time together, a relaxing way for me to get some exercise, and in fact I enjoyed the repetitive activity, the smell of earth and plant material, the pleasant soreness in my muscles. But what I enjoyed most of all was that I could leave the whole project after an hour or two, that the weeds and watering weren’t my responsibility, that I didn’t have to worry whether the plant combinations were optimal or whether aphids were feasting on the roses. The garden was Alexandra’s baby, and though she was glad for the help, she didn’t expect me to take it on as my own; if I tried, she likely would have told me to back off.

After I moved in with her, it was only natural for me to spend more time in the yard, particularly in the vegetable garden; as someone who grew up thinking vegetables were grown by a green giant, I was amazed to find that I could stick something in the ground and eat it a few months later. I rigged up an elaborate and semi-functional drip irrigation system and checked every day to see if my seeds had sprouted. Still, I spent no more than a few hours a week working outside and mostly saw myself as Alexandra’s assistant, relying on her to tell me which plants were weeds, how deep to bury bulbs, how to keep slugs from eating my lettuce.
A year later, when we bought a house together, I helped her dig up half the plants in her old yard and transport them to our new one. I helped design the shape of the new beds and helped dig out grass and prune the overgrown fruit trees. I even gave suggestions about plant combinations and placement. I still deferred to Alexandra on all major decisions, but I was now spending at least a dozen hours a week in the garden, and sometimes I’d devote an entire weekend to it; aside from writing and reading, it was the thing that occupied the largest portion of my thoughts. I suddenly knew the names of all the plants in the yard. I knew how to sink posts and pour concrete. I even built a wooden arch on which to grow hops and honeysuckle.
So here’s the truth of it: After all this time, I have a hobby. How in the world has this happened? Will I start writing poetry, too?
The thing is, now I can’t imagine not having a hobby, something to distract me on days when writing isn’t going well, when trying to craft words into stories seems like the most futile pursuit in the world, when even passages from my favorite books feel stale. I go out into the garden, yank a dandelion or two, dig some bone meal into the soil next to my tomatoes, and come back inside refreshed and ready to get back to work. When a particular story is tormenting me for months, I can go outside and mulch a bed, and see, day by day, that I am actually accomplishing something, that something is really getting done.
Still, my hobbying is a half-hearted one. I’ll spend a couple of days planting groundcover, and then forget about it entirely for the next week. I’ll see weeds coming up next to the peonies and shrug. I’ll let the grass grow up to my shins until Alexandra (who’s now eight and a half months pregnant and too tired to wield clippers, much less a chainsaw) reminds me that I might want to mow. And this, I’ve discovered, is the real appeal of having a hobby. It’s there when I want it, but I can leave it at will. Unlike a story I’m working on, which I can’t go more than an hour without obsessing over, berating myself for everything wrong with it, every slack sentence and inexact phrase, when it comes to the garden I don’t require perfection. I don’t even seek it. All I want is to complete a task and move on to the next one. I shove something in the ground and walk away. What a relief to have an project I can tinker with and then abandon, thinking, Good enough for now.
This week I decided (or, really, Alexandra decided) that we needed to install a hose rack on the back of the house. We’d bought one a year ago, and it had sat unused in the yard all this time, the hoses tangled on the ground beside it. I spent an hour wrestling with it, stripping screws, breaking off a drill bit in the siding, cursing like a sailor who’s just speared his foot with a harpoon, but finally got the thing hung, the hose wrapped around it. Not perfect, but finished. I came back inside and returned to a story I’ve been fighting with for more than a year. The broken drill bit is still stuck in the house.
This is Scott’s eleventh post for Get Behind the Plough.
Image Source.