Home
»
Reading
»
The Art of the Sad Birthday 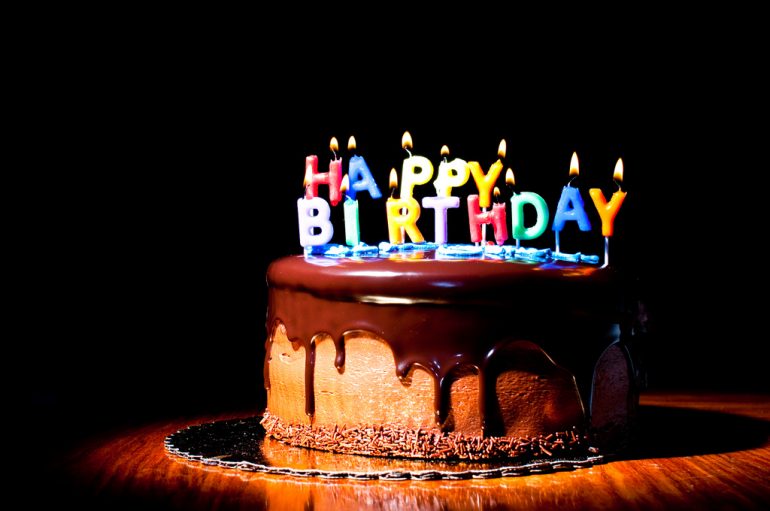 Are you a writer looking for a situation with built-in irony and ample opportunities for subtext? Have you considered a melancholy birthday scene? I’ve collected a few merciless examples for consideration. 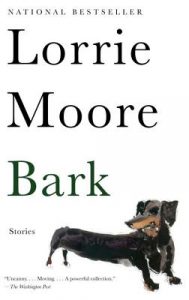 Moore dives into the irony of the sad celebration in the first paragraph of the story, from her most recent collection, Bark.

Mania. For the third time in three years they talked in a frantic way about what would be a suitable birthday present for her deranged son. There was so little they were actually allowed to bring: almost everything could be transformed into a weapon and so most items had to be left at the front desk, and then, if requested, brought in later by a big blond aide, who would look the objects over beforehand for their wounding possibilities.

The story is more about a flagging relationship than it is about her son, who is in an uneasy state of equilibrium when the story begins. The protagonist’s sort-of boyfriend, Pete, who retreated when her son grew ill, accompanies her on the visit. Pete is the only named character in the story. The son, in the grip of his illness, eschews subtext in conversation, asking Pete questions his mother never asks: “So where have you been?” and “Do you miss us?” However, the son believes that nearly everything, including the “soft deckle-edged book about Daniel Boone” his mother eventually settles on as a birthday gift, contains subtext meant only for him. She knows he’ll become obsessed with the messages he finds in it. Everything has wounding possibilities.

Later the boy tells his mother there will be cake for someone’s birthday, thinking it’s for someone else.

“That will be nice!” she said, smiling back.
“No candles, of course. Or forks. We will just have to grab the frosting and mash it into our eyes for blinding. Do you ever think about how at that moment of the candles time stands still, even as the moments carry away the smoke? It’s like the fire of burning love. Do you ever wonder why so many people have things they don’t deserve but how absurd all those things are to begin with? Do you really think a wish can come true if you never ever ever ever ever ever tell it to anyone?”

After the visit ends, the protagonist realizes Pete is “in a condition of romantic overlap” but says nothing about it. 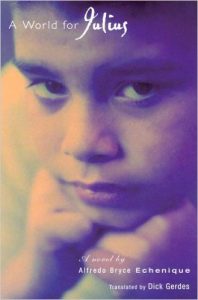 A World for Julius, by Alfredo Bryce Echenique

Bryce Echenique closely follows the consciousness of Julius—a boy born into a wealthy family in Lima, Peru in the 1940s—from toddlerhood to age eleven. He also dips into the thoughts of other characters in Julius’s world, often switching point of view in mid-sentence. Julius’s father dies when he’s very young, and then his sister Cinthia, his truest friend, dies of tuberculosis. Julius is raised mostly by servants. His mother, Susan, always described as “lovely” is prone to popping pills and jetting off to Europe for months. After one such trip, she returns married. His sixth birthday is overshadowed by the recent wedding and Cinthia’s death, and Susan decides “it’s a little too soon to have parties in this house, even for a child.”

Julius’ birthday came but not the presents from Europe. So they had to run out and buy an electric train for him. A man came to the mansion to put it together, and Julius spent the whole afternoon asking too many questions. Finally around six o’clock the train was running; it had been set up in one of the living rooms and, taking advantage of the Senor’s absence, all the servants came in to see it.

Also because of Julius’s stepfather’s absence, Susan plays with him, a rare event. She proposes, in a gesture of magnanimity to the servants, “a toast to Julius on his sixth birthday with Coca-Cola!” She becomes tearful remembering that Cinthia would have been eleven and marvels at the servants’ empathy—she hadn’t thought them capable. Julius is delighted to have his mother and the servants all to himself instead of a party with his cousins.

Everyone was all smiles while they ate ice cream and drank their Cokes. The train went round and round, always passing by Chosica, and it kept on going without stopping because he was caught up listening to her: Susan was telling them about Europe, omitting names in order not to confuse them…They had finished their ice cream and she continued, not even noticing that the others had turned to look toward one end of the room.

Her new husband and her older sons have just returned from golfing (certainly they were too busy to set up Julius’s train), and “stood exuding irony and sarcasm, which embarrassed her.” Thus ends Julius’s sixth birthday. 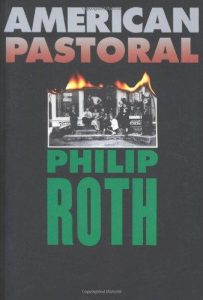 Roth’s narrator, the novelist Nathan Zuckerman, imagines the story of how his childhood idol’s life went wrong. Swede Levov was a legend in their hometown of Newark, New Jersey, but Zuckerman learns at his forty-fifth high school reunion that Swede has just died and his daughter was responsible for several fatal domestic bombings in obscure protest of the Vietnam War. Shocked at the darkness behind Swede’s apparently charmed American life, he invents the story, and in doing so he pulls off the trick of seeming to disappear from it.

In the first full chapter of Zuckerman’s imagining, Swede meets with a woman who knows where his daughter, Merry, is hiding. He hands over some of her belongings, hoping he can arrange to visit her, and the woman berates him with Merry’s stories of her horrible childhood, which Swede remembers as having been idyllic.

“You don’t remember the ‘Now You Are a Woman Party’? To celebrate her first menstruation.”

Swede is slow to catch on, not remembering any such party.

“You mean—no, that wasn’t that. The party? You mean when she took all her friends to Whitehouse for dinner? That was her twelfth birthday. What is this ‘Now You Are a Woman’ crap? It was a birthday party. We took all those girls down to that restaurant in Whitehouse. They had a wonderful time. We had ten twelve-year-old girls. This is all cracked. Someone is dead. My daughter is being accused of murder.”

What had seemed to Swede to be an innocent birthday party is co-opted and twisted beyond redemption, just as what had seemed to Zuckerman to be a good life lived by an upright man is twisted by his daughter’s crimes.