Every year-end ought to be paired with a great book as the weather gets colder. Here’s a list of late fall’s best titles, so grab a copy for yourself and one for a friend, too. 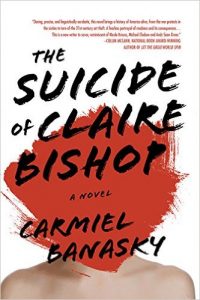 This thriller of a debut novel by Carmiel Banasky throws any tired stereotype about women’s fiction right out the window. An exquisite mix of Let the Great World Spin, The Goldfinch, and the indie flick Safety Not Guaranteed, The Suicide of Claire Bishop begins in Greenwich Village in 1959 when a wealthy, emotionally cautious Claire sits for a portrait only to find the artist has painted her suicide instead. When schizophrenic West encounters the painting decades later in 2004, he becomes convinced it was painted by the ex-girlfriend who still haunts him. His obsession sets himself and Claire on a collision course with the eerie, mercurial painting ever beckoning them onward.

Banasky has created a trademark theology all her own in West’s unreliable, yet oddly brilliant musings on time travel that pair unsettlingly well with the notion that Alzheimer’s, which has a hold on Claire’s family, is a kind of time travel all its own. Though the story itself is boldly labyrinthine and miasmic, the best part of the novel is the romantic mania that inhabits the prose. Intellectually provocative and elegantly rhapsodic, The Suicide of Claire Bishop celebrates the arrival of an uncommonly ambitious and inventive writer. 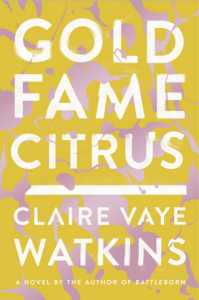 Titled for the treasures that have drawn us to the Southwest throughout history, Ploughshares alum Claire Vaye Watkins’ first novel is both an anti-myth and a legend in the making. It’s the near future and California has been all but evacuated due to widespread and persistent drought. Luz and Ray, two stubborn and feckless Mojavs who have managed to stay behind, spend their days in the abandoned house of a starlet—Luz costuming herself in designer clothes and Ray making lists and scrounging supplies.

When they cross paths with an odd, coin-eyed child, the couple awakens from their stupor and absconds toward the dune sea that roves ever eastward. What awaits them is beyond their strangest imaginations: a salt mine prison, a charismatic man who seems to hold the secret to divining water, and a so-called wasteland that is creepily alive.

Aside from prose that ignites and a landscape that spooks, Watkins’ deeper thematic questions revolve around the problem of eroding loyalties in the post-apocalyptic world. Do we remain true to ourselves, to others, or to our ideals? With a melody both lonely and sonorous, Gold Fame Citrus is a love song for the desert and its bewitching undertow. 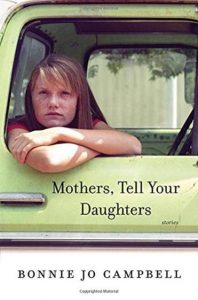 The women in Bonnie Jo Campbell’s latest collection Mothers, Tell Your Daughters have a divinely dirty elegance to them. They are women you’ve met, but maybe overlooked—the phlebotomist exacting your blood, the grocery store cashier swiping your credit card, the neighbor unloading cow manure from the back of a truck—women determined not to bow to the “hard-scrabble” term the rest of the world uses to define them.

In “Tell Yourself,” a mother’s fears for her daughter create a strange kind of nostalgia for the girl she used to be. A pregnant woman finds a stray and the ghost of an old lover in “My Dog Roscoe.” A dying man asks God for forgiveness for his “Multitude of Sins” instead of his wife, and a family bends and somersaults, longing for “Somewhere Warm,” when a truck driver moves in. The title story, “Mothers, Tell Your Daughters,” is the stand-out in a strong collection, in which we discover the internal monologue of a stroke patient as she reveals all the secrets she’s kept from her daughter—if only in her mind.

With grace and candor, Campbell adds some very necessary grime to the face of American fiction. 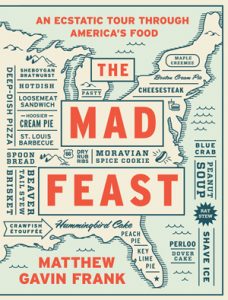 The author of the critically acclaimed Preparing the Ghost returns with a literary tour through American cuisine—the delicious, the strange, the comical, and the anthropological. The Mad Feast is the ideal gift for your closest traveling companion, a self-guided tour crafted with a native’s intuition and panache.

Food is love, food is poetry, and food is weird. Read about West Virginia’s rat (or squirrel) stew and you’ll learn about the camaraderie and fertility of coal miners. Whisk the cream of a Maine whoopie pie and you’ll see how it holds the heart together through a tough winter. Ask yourself New Mexico’s state question, and discover why it’s always Christmas in Santa Fe. Wade through the abandoned articles in Alabama’s One Mile Creek and slurp the sweetness of hummingbird cake. Using quirky historical anecdotes that echo a nation’s motley coming-of-age, Frank has found a way to serve each state’s beating heart on a platter.

At turns spunky, wise, and melancholic, The Mad Feast is essential reading material for your next cross-country road trip.