Home
»
Uncategorized
»
The Best Story I Read in a Lit Mag This Week: “An Animal Under the Ground” by Steven T. Gibbon

I think most of us who have ever had customer-facing jobs can say: dear god, it’s exhausting. Human beings, while resourceful and tenacious, are made of meat and therefore susceptible to all manner of physical and mental abuse. There’s only so much we can handle. After long enough, having the same conversation with a customer or reciting the same bit of information is enough to turn us all into unbalanced, weary, rage-filled monsters. Which is exactly what seems to have happened to the park ranger narrator of Steven T. Gibbon’s story “An Animal Under the Ground” published in Issue 4 of Armchair/Shotgun. 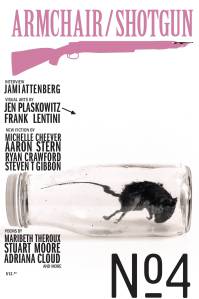 “An Animal Under the Ground” is written as a set of pre-tour guidelines for a Pink Fairy Armadillo safari, delivered by our nameless narrator, a cantankerous and seasoned park-ranger-turned-tour-guide. (I know, you guys. Here I am, loving another story that adopts an unusual form. Nobody is surprised!) The tour guide rattles off a list of dos and don’ts, complete with exaggerated stories (some of which are supposed to register as jokes to the customers), and inappropriate references to coworkers and past tours.

Gibbon establishes what’s going on right away, and lets us know that we’re dealing with an impatient, bored narrator. The story begins, “There are six crucial facts that you have to understand before you can enter the Pink Fairy Armadillo Safari. We have a nice small group, so let’s try and get through this quickly.” These first two sentences have a rote, knowing quality—our narrator has repeated himself. A lot. Mentioning the “nice small group” also makes the reader aware that there have been plenty of other groups, not nice, not small, that have heard the same speech before.

Gibbon’s decision to write the narrator as a seasoned safari guide is excellent, since this allows the character to lecture the new group with nuances for each rule. This is pretty entertaining, since our narrator’s unhappiness and boredom manifests in a liberal doling out of insults and privileged information. Some of the narrator’s asides include a warning to wear the goggles lest your eyes be ripped from their sockets, a quick hello to another staff member (followed by a list of who she’s slept with at the park), and a description of what will happen should you try to steal an armadillo.

All of this information gives the tour a history that expands the world of the story. Each time he stops to clarify or anticipate a customer’s question, the narrator allows us a glimpse of the park’s wide and varied past. As a result, the Pink Fairy Armadillo Safari and its staff read like a real place, and the tour’s guidelines feel like they belong in, well, an actual tour.

All of this extra detail reveals the narrator too—and oh boy, if I were a part of this group, I would not be interested in knowing more about our dude. I’d be strategically placing myself behind another member of the group and trying not to make eye contact. (Special thanks goes out to NYC for its invaluable lessons here.) Lucky for me and all of you, this is fiction, so none of the narrator’s crazy will come hurtling in our direction, and his aggression and over-sharing is entertaining rather than kinda terrifying.

His grasp on his present reality seems a little tenuous, which we get to see when he wanders off topic while addressing the safari’s second rule: handle the Pink Fairy Armadillos with care. He keeps saying “you do this” and “you do that” as he describes how they might accidentally kill an armadillo, but after a while, we understand that he’s stopped talking to the tour group and is instead addressing a part of himself that might better be kept hidden—if not always, then at a least when he’s dealing with customers at work. Part of what’s so compelling about this story is how the narrator shows us who he is in an environment where all he’s supposed to be is a cool, blank-faced professional. Instead, what we get is a vindictive, emotionally-inept mess.

“An Animal Under the Ground” reminds me of Daniel Orozco’s story “Orientation” in its skillful merging of sterile, practical information and emotional, occasionally outlandish detail. Both stories are set in a workplace and address another person or group present in the narrative. The challenge here, which Gibbon navigates well, is the balance between including information true to the setting or form and enough character-revealing detail to invest us in the narrative.

The narrator in “An Animal Under the Ground” is lonely and mean, each qualities that seem to beget the other. I felt for him even as I disliked his callous, entitled attitude; his jokes don’t land, he lashes out when frustrated, and given the length of his speech (which should otherwise be pretty straightforward and short), he seems like he doesn’t have many other opportunities to speak while people listen.

So pick up a copy of Armchair/Shotgun to read Steven T. Gibbon’s story. If you can grab a copy at your local bookstore, please do! (One of the journal’s goals is to support local bookstores and literary communities.) I grabbed my copy at WORD in Greenpoint. If you live in New York and haven’t been there, stop it. Go there, buy a copy of this journal, and read Gibbon’s story. You won’t be disappointed.