Home
»
Reading
»
The Bitter Southerner’s New Song of the South 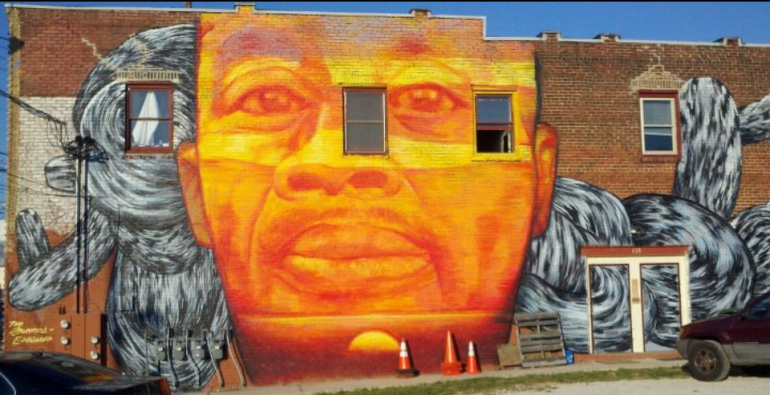 By Keizers (Own work) [CC BY-SA 3.0 (http://creativecommons.org/licenses/by-sa/3.0)], via Wikimedia Commons

“Sometimes you just gotta show people,” writes Chuck Reese, founder and editor of The Bitter Southerner, an online magazine of writing, photography and music from and about the South. Reese, like many natives, grew tired of the clichés about the South as a region of kinda dull, kinda ignorant yahoos. He says it made him bitter and out of that bitterness an idea was born.

The Bitter Southerner is celebrating its third anniversary this month, the same time Atlanta celebrates the 20th anniversary of the 1996 Summer Olympic Games. Local NPR personality Lois Reitzes marked that occasion with a tart essay reminding readers of a New Yorker cover that ran just prior to the start of the games featuring a farmer in overalls with a pig under one arm and the Olympic torch in the other. Across his chest a banner read “Howdy.” Reitzes remembers being shocked, dismayed and angry:

“How could The New Yorker display ignorance?” she writes. “Not only was that depiction of Atlanta insulting, it was entirely wrong. Was the editorial staff unaware that Atlanta was urban, not rural? … Not many Atlantans greet each other with ‘Howdy’ so far as I know. Isn’t that a cowboy expression?”

This outdated view of the South hasn’t really changed much in the last 20 years but Atlanta has. A recent New York Times restaurant article peppered its discovery of the ‘new’ Atlanta dining scene (which has been thriving for years) with tired references to “Gone with the Wind.” Natives don’t recognize themselves in these lazy travelogues and newcomers (like myself) are just confused. Who are my neighbors? What are they like? Who’s making the music, writing the books, cooking the food and chronicling how we live right now?

Every Tuesday the Bitter Southerner posts one story – just one, but it’s a long read with great photography. Bitter Southerner contributors write about everything: cultural landmarks, physical landmarks, Elvis, Hank Aaron, moon pies, roller rinks, home cooking, BBQ, politics, family traditions and the things people put out on their front porches. The Folklore Project is a collection of personal essays about life in the South. Sometimes there is audio. Sometimes there is music. After all, the South is home to Nashville, New Orleans, Memphis, Austin, Muscle Shoals and hip-hop capital of the South, Atlanta. Since the idea for the site was conceived in a New Orleans bar, there are also cocktails, and speaking from experience, I can tell you the Bitter Southerner No. 2 was fantastic.

There are stories about the famous the moderately famous and the completely unknown but no less important. Contributor Susan Rebecca White put it this way, “The folks at The Bitter Southerner aren’t about whitewashing the South, literally or figuratively…What they are interested in are true stories from the South, in all of our diverse and disturbing, beautiful and gracious, awful and funny ways. When I read The Bitter Southerner, I think, ‘Yeah, this is me, and yep, this is home.’”

When my friends and family up North ask what it’s like down here (bless their hearts), I send them links to Bitter Southerner stories. I especially like How To Fall in Love with Your City about the various ways Atlanta sees itself: via Atlanta’s Living Walls project and the popular Instagram hashtag #weloveATL, a collection of photos that tell stories of life in the city.

Other stories fill in historical and cultural gaps. Ann Byrn’s “The Godmother of Southern Cooking (with Gas) is the kind of story that probably wouldn’t be told without Bitter Southerner. It’s about Mrs. S.R. Dull, sometimes called “The Betty Crocker of the South.” She was a wife, mother grandmother, caterer, cookbook author and newspaper columnist who taught women how to cook with newfangled gas stoves. Gumbo Ya Ya takes a fresh look at 400 years of Mardi Gras. “When New Orleans and Mobile started throwing what we’d call the first modern Mardi Gras, the upper classes told themselves that they’d inherited a heritage and aristocratic spirit from the European nobility – which was true,” writes Richard Murff. “Except for the facts.”

Other times I’ll send friends to Go Tell it On the Mountain by one of my favorite writers, Alabama author Charles McNair, who now resides in Bogotá, Colombia. Before he left he used to give short talks on classic fiction once a week on indie AM radio station WMLB in Atlanta, which was the absolute highlight of my weekly commute. In this story he weaves together his own memories of his father and the beloved and controversial Confederate memorial at Stone Mountain Park. It’s a deep and thoughtful memoir of a place that defies cliche. “Just about everything in the South gets more complicated if you scratch the surface,” McNair writes. “Nothing is skin deep here.”

This is all well and good, you may say, but how does The Bitter Southerner intend to make any money? Oh that’s easy. They started a club. For a mere $25 you can become a card-carrying Bitter Southerner. They’ll send you a card you can keep in your wallet and if you give a little more, there are some additional goodies. “We knew if we tapped into a Southern sensibility that is way richer than ‘Honey Boo Boo’ and ‘Duck Dynasty,’” Reese told Forbes in 2014, “that our community would support us.” Proceeds from the site have been enough to pay contributors and part-time salaries.

It’s the Southern sensibility that readers identify with and want to declare their affinity with and their affection for. In the online General Store readers can purchase apparel, autographed books and music and a variety of artisan goods made by Southern craftsman including linens, leather goods, posters, prints and even Mardi Gras arrows. To support the cause, I bought two beautiful mugs from North Carolina East Fork ceramic artist Alex Matisse (great-grandson of the impressionist painter) and I am a paycheck away from ordering up my own bottle of Pappy & Company bourbon barrel-aged pure maple syrup. But alas, I was too late to get an autographed copy of the graphic novel March by Rep. John Lewis (who happens to be my Congressman). As you might imagine, those sold out pretty fast. It feels good to support not just good Southern writing, but a venture that opens eyes and ears on a part of the country that’s been hiding in plain sight for years.