Home
»
Series
»
The Black Aesthetic: Death, Mourning, and Celebration in Prince’s “Sometimes It Snows in April” and “Let’s Go Crazy” 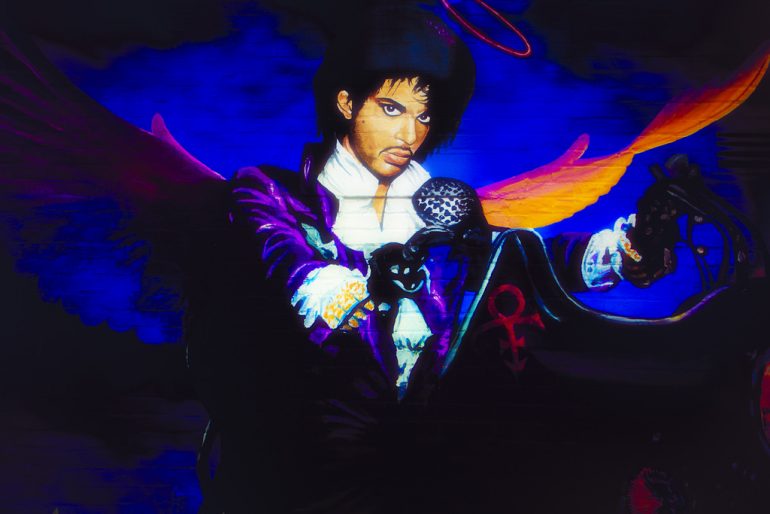 When Prince Rogers Nelson died on April 21, 2016, his fans were shook by his untimely death. Many wondered if Prince himself foresaw the specter of death in his midst. As the world remembers the musical icon, the black and white movie Under the Cherry Moon (1986), directed by Prince, may have foreshadowed his April death. At the end of this aesthetically beautiful, yet box office bust of a film, Christopher Tracy, played by Prince, dies suddenly. “Sometimes It Snows in April,” is a song about mourning and remembrance.

Prince pens these melancholic words for the movie’s soundtrack, but they signify how many of us fans felt about his death thirty years after the release of the movie. The words “dream of heaven” reflect our hope that Prince has found peace in the afterlife. Moreover, the phrase “April snow” is oxymoronic, yet layered in symbolic inferences. By shooting with black and white film, light and dark wardrobes and skin colors contrast well. In the movie, Tracy is stunning in heels and all white. His pants, shirt, and ethereal cape-like jacket flow against his five foot three inch body. Yet, when he falls to his death, there’s no white snow on the ground. According to Western Christian tradition, white is associated with baby Christenings, baptisms, and weddings. However, in the East, white may be associated with death instead of black. Perhaps Prince’s wardrobe signifies acknowledgement of an opposing tradition in terms of symbolic imagery.

With regard to the prevalence of April snow, in some regions of the country this occurs. However, April is generally associated with springtime and new beginnings. For the person who reminisces about Tracy’s passing, spring is now associated with mourning “Tracy’s tears.” As the movie heads toward the finale, “Sometimes It Snows in April” plays in the background. The audience hears a voice. Prince says prior to going to heaven, “We had fun, didn’t we?” Since Prince recorded this tribute to Tracy for the first time on April 21st, 1985, did he foreshadow the exact month and day of his death? Perhaps, but in the absence of empirical proof, we’re left to search for clues in his musical catalog.

Another eerie coincidence, or perhaps foreshadowing, is coded in “Let’s Go Crazy.” Purple Rain (1984), a semi-autobiographical film starring Prince, featured the hit song on the movie’s soundtrack. For years, this song has been associated with partying and celebration, yet various phrases in this song indirectly and directly reference death. Moreover, the descending elevator hints at endings. In essence, the verses appear to say to enjoy your life because “We’re all gonna die.” The irony is not lost on his fans. According to producer L.A. Reid, Prince once told him that the “elevator is the devil.” Prince was found dead in the elevator of his home.

Tell me, are we gonna let the elevator bring us down
Oh, no let’s go!
–“Let’s Go Crazy”

Here, Prince emphasizes the importance of living your life to the fullest. Enjoy every minute of it. Since the Grim Reaper personifies death in American culture, it’s telling that the next line instructs everyone not to let the “elevator bring us down.” This line signals the need to avoid descent in order to elevate: “Go crazy, punch a higher floor.” In an interview with Chris Rock for VH1, Prince says “Let’s Go Crazy” was about God and Satan. To Prince, if you “stay happy and stay focused . . . you can beat the elevator.”

For SNL’s 40th anniversary after-party, in Jimmy Fallon’s tribute to Prince, he discusses in awe the effect that Prince had on celebrities. “Fallon said he dared Prince to ‘come up and sing something with us’ and was shocked when a crowd of celebrities, including Beyoncé and Jay-Z, suddenly parted as Prince made his way to the stage. ‘He got up and it was unbelievable,’ Fallon said. ‘He just destroyed.’” Prince was dressed in black with a blown out Afro; he sang “Let’s Go Crazy” alongside Maya Rudolph, Jimmy Fallon, Chris Rock, Bill Murray, Martin Short, Cuba Gooding Jr., and Emma Stone. Visibly, they were all emotionally captivated by the experience with the legendary Prince.

Both “Sometimes It Snows in April” and “Let’s Go Crazy” express the importance of enjoying one’s life while on Earth. But there is still the haunting element in Prince’s lyrics that signifies our human quest to discover the meaning of life and death. With every strum of his guitar, Prince challenged his audience to elevate themselves, find the god in themselves, and seek higher ground with his powerful use of symbolism. In the month of April, the country will remember the death, but celebrate the life of a great artist who foreshadowed his life story in the verses of two of his most unforgettable songs.