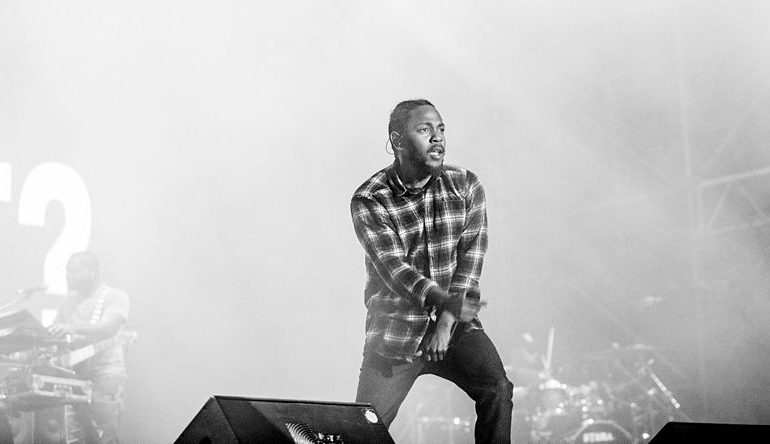 Kendrick Lamar’s latest album Damn maintains his position as the most profound rap lyricist alive. With songs such as “DNA” Kendrick asserts his Black male dominance despite the media’s emphasis on Black male inferiority. When Kendrick says, “I got millions, I got riches buildin’ in my DNA,” he pushes back against their genocidal stereotypes of black demise. And, in “God,” he promotes the theme of his preeminence as a small “g” god in the rap industry, while emphasizing the loyalty of performing for the people, “Everything I do is to embrace y’all.” Kendrick’s Damn subverts the power of DNA as defining black life and the determinant of black fate, while asserting lyrical control as the cultural torchbearer of black pride in America.

When Kendrick Lamar uses the word “DNA,” we’re confronted with a scientific concept, which has both biological and metaphorical meaning. Lamar raps, “I got dark, I got evil, that rot inside my DNA,” there’s a sardonic acknowledgment of how society perceives African Americans. In a sudden tonal shift, Kendrick reminds everyone that his DNA doesn’t determine his destiny: “I just win again, then win again like Wimbledon, I serve.”

In Kendrick’s “DNA” video starring Don Cheadle, Kendrick asserts his Black manhood in the process of demonstrating his preeminence as a rap lyricist . On a black interrogation table, a polygraph sits as the centerpiece. A faulty tool used to determine guilt or innocence separates Cheadle, the investigator and Kendrick, the condemned. There’s a long chain that shackles Lamar’s wrists to the table. Looming over Kendrick, Cheadle says “You know what DNA stands for? Dead Nigger Association.” Since Cheadle implies that Blacks’ evil within will kill their entire race, his verbalization of DNA is dehumanizing as the chains that shackle Kendrick’s wrists. With a push of the polygraph button, Kendrick possesses Cheadle’s body. The song plays, “I got Loyalty, got royalty inside my DNA.” The word “loyalty” implies allegiance and support of his community. Perhaps, due to the royal blood that exists in African heritage, the word “royalty” suggests power and sovereignty. Or, royalty serves a double meaning as the power of the money he earns from his music.

For a moment, the black DNA they share creates a synergy of rap exchanges between protagonist and antagonist. Cheadle’s recent awakening causes him to release Kendrick from custody. With a pat on the shoulder from Kendrick, the one who formerly held the power falls to the ground. Kendrick, the former prisoner, reappropriates the n-word. He charges out the door to freedom. A sample of Geraldo Rivera’s voice plays. “This is why I say that hip-hop has done more damage to young African Americans than racism in recent years.” Kendrick rejects words of cultural condemnation. For Kendrick, rap symbolizes liberation from systemic oppression. The hood connects Kendrick to the city streets. The streets are life and the dark backdrop for Kendrick’s liberation. Since Kendrick is unable to separate his progress from those who share black DNA, Kendrick stands proudly amongst the other Black men.

Initially, Kendrick believed that the only people who would understand Damn were his community. When he says the word community, he means “Compton, Long Beach, L.A., the Bay Area, San Francisco, Oakland.” In other words, Kendrick’s referring to people who grew up in gang infested neighborhoods. Kendrick says to New York Times contributor Wyatt Mason that as a society, we’re excluding God out of our lives. And, since living spiritually and mentioning God is often in conflict with the manner in which society communicates “about politics and government and the system,” issues aren’t being addressed.

In the song “God,” Kendrick appears to liken his lyrical prowess to a sense of omnipotence. The refrain he says, “This what God feel like” as he rattles off everything he’s been able to accomplish. He measures his success with the metaphor, “Everything I touch is a damn gold mine.” Meaning, every endeavor he engages in is valuable. There’s an allusion to God’s infallibility with the words “Everything I say is from an angel.” The use of the word “angel” implies purity or authenticity. In essence, Kendrick is saying he’s real and the community can trust he’s with them.

After all, prior to his declaration of greatness, he says, “Everything I do is embrace y’all.” Therefore, Kendrick’s greatness is indistinguishable from his people. His success is theirs and their frustration becomes his. Kendrick has “Seen it all, done it all, felt pain more/ For the cause, I done put blood on sword.” Lamar unites his pain of having to survive in the streets with the turmoil of his community. Perhaps, he is saying, he has made sacrifices and has been surrounded by dangerous violence. But, still, Kendrick doesn’t succumb to black demise because of the God within himself.

Both “DNA” and “God” depict the complexity of black life in America. Since there’s greatness in African heritage, “DNA” reminds us that black destiny shouldn’t be framed by genocidal stereotypes of demise. “God” celebrates Kendrick’s lyrical prowess. But, it also shares the theme of loyalty and community with the song “DNA.” In Damn, Kendrick Lamar asserts his pride in Black manhood and life, while also acknowledging the power it takes to survive it. Therefore, in the process of knowing one’s own greatness, individuals can’t succumb to systems that attempt to predetermine one’s worth and destiny. From within, underneath the pain, one must muster the power to rise above it.