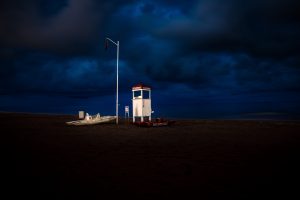 Jacob Banks’ latest EP The Boy Who Cried Freedom explores redemption and rescue. To emphasize those aforementioned themes, Banks’ EP delves into how we must free ourselves from our forefathers’ sins and various other social ills. Oftentimes, we look to family or our leaders to rescue us from our personal and/or social condition. But, those same forces we look to as a refuge, also have the power to unjustly oppress us. With songs, such as “Unholy War,” Banks confronts the human trafficking of child soldiers, in his home country, Nigeria, and the sacrifices a father must make to save his son from an untimely death. Whereas in Banks’ song “Chainsmoking,” he is a scorned lover oppressed by his abusive relationship. In both “Unholy War” and “Chainsmoking,” the human quest for redemption and rescue is the same. However, the forces of oppression may come in the form of love, war, or both.

Unholy war
My demons are coming
Boy, you better run
Go take your freedom, oh no

When Banks uses the words “Unholy War,” it is the antithesis of a Holy War. In other words, his song title suggests that this warfare, he speaks of, is not sacred and has no religious basis. Thus, an unholy war is an unjust conflict for all parties involved. In essence, Banks is socially critical of needless bloodshed, and he’s critical of the personal wars faced by some families. To emphasize the lack of sanctity in this scenario, Banks’ lyrics and accompanying video imply social resistance to both the use of child soldiers, and personal resistance to the oppressive forces that seek to divide a father and son. In the following verse, he sings, his “demons are coming” and the boy “better run” for cover. Apparently, there’s no refuge in staying stationary. Escape is his son’s only chance for freedom. With the next line, when he sings, “Wade in the water,” Banks alludes to an old Negro spiritual instructing escaped slaves on how to evade capture. At this moment, we know the boy will be a slave to oppressive forces, if he is captured by this “demon.”

In Banks’ “Unholy War” video, a young man, his father, and a demon riding on horseback seek to capture this father’s son. As the father prepares his tear-stricken boy for departure, these words are heard: “They will come for you because […] every nine months you give birth to a soldier.” At this moment, it becomes clear that the father is confronting a force that has the power to ensnare his son. By use of the word soldier, we know the son will pay his father’s debt, more than likely by fighting in an unjustified war. However, although we don’t know whether this debt is figurative or literal, in an article for Billboard, Alexa Shouneyia writes, that this video, directed by the Nigerian born Banks, is “inspired by real life that dives into the difficult themes of war and prejudice.”

To avoid becoming a child soldier, the farm boy takes off after hugging his teary eyed father. With only the clothes on his back and a crème colored knapsack, the boy is gone. Meanwhile, the father is waiting for his judgment to come. Armed with only a knife and a flask for courage, he awaits the horse riding, metaphorical demon that looks like a masked man from an old western movie. Meanwhile, the boy continues to run through the dusty fields; his feet pound the ground. As the snowcapped mountains in the background demand our attention, Banks sings, “I know it’s killing you / Oh no / You gotta leave.” Once the white hand demon arrives, he pulls down his scarf, revealing a massive red scar on his face. The demon is only a man. Perhaps, he is seeking vengeance. Instantly, the father and the man run toward each other prepared to fight. In the last scene, a figure kneels before a huge white cross. Assuming the father has been mortally wounded, he has redeemed his son with his fatal sacrifice.

The theme of redemption and rescue continue with Banks’ “Chainsmoking” video. Featuring a bruised-face Banks and a series of other battered people, a white man in military gear confronts them. It’s unclear if this is an actual serviceman or a policeman. But, every time, any of the people try to rise up, regardless of their color, they are knocked to the ground. With their right hand fists raised up, perhaps an allusion to Black power, the White man, the Black woman, and the Muslim woman are subsequently choked by the authority figure and shoved back down. In a perilous time, where tyranny reigns all over the world, these images of physical oppression are disturbing yet powerful.

Unlike the physical, social, and systemic oppression present in the video, Banks “Chainsmoking” song focuses on an oppressive romantic relationship instead. By saying it’s hard to breathe, he’s implying that this bad relationship is suffocating his lungs. He’s addicted to the pain. This love is like a cancer-causing cigarette that he can’t put down. Banks sings, “And still I’m hanging on to the life we had before / I know this cold love won’t lead me to the Lord.” Thus, he knows this relationship has served it’s time and there’s no salvation in this love.

Clearly, there’s a desperate desire to be rescued. It’s as if he’s asking to be released from feeling “black and blue.” Banks knows that if this relationship continues he’ll “be a casualty when morning comes.” Perhaps, if he doesn’t rescue himself, he’ll be emotionally ruined, feeling dead inside. Yet, in contrast to the song, in the video, the oppressive authority figure becomes frustrated with Banks. Since the tyrannical figure can’t hold Banks down, he shoots the physically battered Banks while his right hand fist is thrust upward. In this way, the song and video are similar. One way or the other, a persistent individual is emotionally or physically dead behind a bad, oppressive situation.

Both “Unholy War” and “Chainsmoking” depict the need for redemption and rescue. In the “Unholy War” video, a father must sacrifice himself to redeem his son. It’s unclear whether the demon is the father’s past sins or an oppressive force that seeks to enslave his son as a child soldier. Whereas, in “Chainsmoking,” love is the oppressive force that enslaves Banks in an emotionally damaging relationship. In the dramatic video, he likens his personal pain to the systemic oppression of various individuals at the hands of a tyrannical figure. With his EP, The Boy Who Cried Freedom, Banks metaphorically depicts society’s constant need for redemption and rescue, in a world that constantly seeks to steal our freedom.