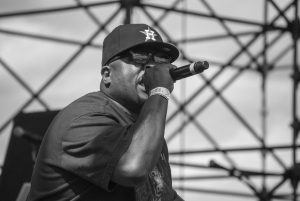 Scarface, a former member of Houston’s Geto Boys, has never shied away from politically charged songs. Darryl Roberston writes in Vibe, “He’s from the school of the likes of KRS-One, Willie D, and Public Enemy, who were fearless when it came to taking on social issues.” As an outspoken pioneer of hip-hop, Scarface raps a recreation of Public Enemy’s “Black Steel in the Hour of Chaos” with his new song “Black Still.”  In the song’s video, images of slavery and lynching make a case for reparations; the video then cuts to a young man studying his African American history in a library. In the song, “Same Ol’ Same,” Scarface talks resistance while discussing how American culture is headed backward instead of moving forward. Scarface’s latest album Deeply Rooted: The Lost Files feature “Black Still,” which talks about economic reparations and “Same Ol’ Same,” which urges personal resistance in a society, where interracial and intraracial violence are deeply imbedded into America’s systems and institutions of higher learning.

In “Black Still,” when Scarface says, “Our kids are educated by the enemy,” he’s identifying African Americans as outsiders in regards to the educational system: Blacks don’t control the system due to the vestiges of slavery, so they started from an unequal playing field. As a result, they’re frequently taught about the majority’s culture, views, and values instead of their own. African American young people are therefore studying White history from the perimeters. They’re internalizing both the subtle and overt message that African American history has no place in the system. Without a doubt, this lack of knowledge of oneself creates a sense of displacement. The video for “Black Still,” directed by John D. Tucker a.k.a. Dr. Teeth, suggests, however, that African Americans resist doubting themselves and their communities.

Instead of submitting to the power structure, Scarface seems to be saying, you should empower yourself, learning Black history to create a sense of self-awareness. As Scarface raps, “Here’s a land that never gave a damn / About a brother like me from the jump,” black and white images of Black prisoners flash across the screen. In opposition to those images of mass incarceration, a young man, played by Micah Banks, walks through the aisles of the library, searching for himself and his people in the pages of a Black history book. All the while, Scarface continues, saying he demands reparations: “Fuck a cowboy, I’m a native robbed of my nation / I’m an African, Black man.” As his verses grip the listener, the screen flashes a drawing of a slave ship with Africans inside, sharecroppers picking cotton, and Blacks getting harassed by everyday White citizens in the midst of Jim Crow-era segregation.

After studying from stacks of library books, the young man presents his paper, entitled “Black Still.” Once he finishes sharing his newfound knowledge, the White teacher puts her head down in her hands and the young man slowly lifts up his right fist in the air. The other students nod their approval and clap. While he stands there, the teacher pulls down his arm and kicks him out of class. Meanwhile, another kid in the class, Paul Banks, Jr., thrusts his right hand in the air, signaling his approval for his rebellious classmate who can’t resist heading out the door with his Black Power fist proudly in the air.

When I sat down with the video’s director of photography, Paul Banks, Sr., I asked him about the meaning behind the young boy’s quest for knowledge―the old school way, via library research. Banks said that millennials make up “a group who has always had the ability to rapidly access current information. However, the expansive knowledge base is usually polluted with an equal amount of fake news. Sometimes it’s best, especially when dealing with Black history, to research from a more traditional stand point.” In essence, Banks sums up our conversation by saying that much of what African Americans have been taught about their “history has been whitewashed.”

In Scarface’s song “Same Ol’ Same,” he raps about the unwritten rules of the street. Here the survival, unlike school, is not simply a mental one. For a street hustler, survival is both mental and physical. Unlike the American education system, where White dominance is threatened by well-educated Black youths, in the streets, Blacks intimidate other Blacks. Based on the lyrics from the song, men on the street feel threatened by Scarface now. So he tells them, “If you wanna start a war, come near me.” There’s a feeling of impending violence, yet still a resistance to one’s own defeat. Although some of Scarface’s audience may come from different places, he touches on the universal condition of our fragile humanity. When things are going wrong, we must resist our enemy or submit to defeat.

There’s a sense that Scarface has experienced much danger in life. Throughout the song, he lets his adversaries know that “talking reckless” will not make him cower. Since he was a kid coming up in the streets, he’s had “itchy trigger fingers.” No matter whether his haters issue reckless threats or discharge empty words, he’s certain of his own actions. He’s ready for whatever his enemies bring. And, in the process of serving up his knowledge, he makes an eerie allusion to death. When Scarface says, “That you can go to the grave with,” he’s using an idiom to declare: This is my position; this is who I am; this is my truth. And, when it’s all said and done, Scarface, who came into this harsh world with nothing, will be the resistant one, standing all of his enemies down.

Both “Black Still” and “Same Ol’ Same” present two types of violence. There’s the American violence of the education system whitewashing African American history and culture. But, then there’s the intra-racial violence, experienced by people of color living in the hood. In many ways, “Same Ol’ Same” is the predictable outcome resulting from the fragmented history of African American experiences in this country. Where “Black Still” is a form of intellectual recovery and a demand for reparations for the emotional, mental, physical, and economic damage to the Black body. “Same Ol’ Same” is a morbid result of the vestiges of slavery and the dehumanizing torture and labor. Scarface’s message is clear to African Americans in every economic stratosphere: Since the ghosts of America’s past still inflict pain, we must get knowledgeable, resist, and demand our ancestors due. As the popular television correspondent, Angela Rye, has said many times, “We Built This Joint For Free.”