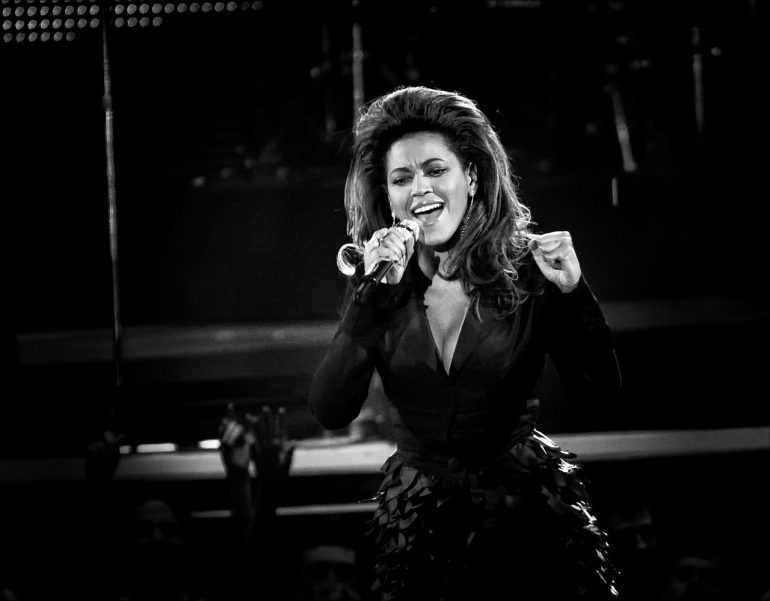 From a sea of beautiful black faces, honey-colored tresses tumble from a golden crown. A pregnant belly hides twins beneath Beyoncé’s sheer gold, beaded sequins gown. As usual, Beyoncé’s aesthetic appeal during her performance and her lyrical gifts subvert stereotypical notions of black femaleness as ugly or undesirable. On Grammy night, amongst her nine nominations, Beyoncé was nominated for songs such as “Hold Up,” reminding her lover that she’s still sexy, and for “Formation,” where she expresses her love for her black facial features. In Bey’s groundbreaking visual album, Lemonade, images of black femaleness manifest as not only sexually pleasing to imagine, but empowering to behold.

When Beyoncé dropped her masterpiece Lemonade last year, the world was abuzz. Themes of black beauty as sexually powerful blended seamlessly from one scene to the next. In “Hold Up,” submerged under water, we hear Beyoncé’s spoken word poetry as she describes insecurities over whether her lover is cheating. Then, she powerfully emerges from a column-laden building as the opening melody plays. With each step, water rushes down by her bare feet. Wearing a canary yellow dress, she saunters down a New Orleans street. Her honey-colored cleavage boldly shines freedom back toward the sun.

Something don’t feel right because it ain’t right
Especially comin’ up after midnight
I smell your secrets, and I’m not too perfect
To ever feel this worthless
How did it come down to this? Scrolling through your call list
—”Hold Up”

Beyoncé asserts her ability to sexually please him. “Know that I kept it sexy, you know that I kept it fun.” Her man’s coming home late. Our senses tell us, “He’s hiding lipstick kisses and French perfume around his collar, girl.” Women’s intuition, our grandmothers used to call it. In this scene, Beyoncé holds nothing back. Earlier in the refrain, she calls her lover wicked for the way he treats her. As another black woman looks on, she takes back the power her lover holds over her.

Beyoncé slyly smiles, shatters the glass windows of parked cars, slams off the head of a fire hydrant, and breaks a store window with her bat. With her power reasserted, she reminds her king that she is the main reason other women want him. Had he “Never had the baddest woman in the game in” his sheets, would those side chicks have still wanted him? We know the answer. Therefore, we smile, too.

Although “Hold Up” didn’t win a Grammy for Best Pop Solo Performance, Beyoncé won a Best Music Video Grammy for “Formation.” It’s perhaps one of the most spectacular videos in terms of visual imagery. Hegemonic images of slavery, the Antebellum South, and southern urban dilapidation demonstrate the complexity of black life, culture, and heritage. In one scene, Beyoncé floats on a car partially submerged underwater. Meanwhile, in the next scene, she dances powerfully and provocatively in the dark halls of a plantation home.

My daddy Alabama, momma Louisiana
You mix that negro with that Creole, make a Texas bama
I like my baby hair with baby hair and afros
I like my negro nose with Jackson Five nostrils
Earned all this money, but they never take the country out of me
I got hot sauce in my bag, swag
—”Formation”

When Beyoncé lays claim to our Jackson Five noses that even the iconic Michael Jackson rejected with plastic surgery, she resituates African features as pleasing instead of hereditarily shameful. While acknowledging the influence of her Louisiana Creole heritage, she claims proudly the Texas negro heritage, subverting traditional notions of European beauty as the standard. This complex African American and heterogeneous identity makes her the enviably sexy woman the world knows simply as B.

But, as we witness her embrace the desirability of black femaleness, the audience is empowered by watching her later dance in a drained pool with black women, wearing natural hair and revealing grey leotards. In this scene, Beyoncé positions herself around other black women whose dance movements say, “This is who I am, this is who I identify with, this is who empowers me.” Inversely, people around the world view black women embracing their physicality and ability to arouse interest. Thus, Beyoncé’s visual and rhetorical representation of black femaleness is both sexually desirable and empowering for women worldwide.

During Beyoncé’s acceptance speech for winning Best Urban Contemporary Album, she articulates the purpose behind Lemonade:

My intention for the film and album was to create a body of work that would give
a voice to our pain, our struggles, our darkness and our history. To confront
issues that make us uncomfortable. It’s important to me to show images to my
children that reflect their beauty so they can grow up in a world where they look
in the mirror—first through their own families, as well as the news, the Super
Bowl, the Olympics, the White House and the Grammys—and see themselves. And have
no doubt that they’re beautiful, intelligent and capable. This is something I
want for every child of every race, and I feel it’s vital that we learn from the
past and recognize our tendencies to repeat our own mistakes.

In that moment, Beyoncé reiterates her intentions to reflect black female images that assert beauty for her children and all children of the world. But, to understand black female sexual empowerment, you have to behold the array of black facial features and skin tones in her performances and videos. Lyrically and visually, Lemonade reflects authentic black femaleness that’s acknowledged by women of all cultures. Even the British Adele, a self-proclaimed Beyoncé fan and the winner of Album of the Year, had to acknowledge that Beyoncé deserved the award because of how she inspires and empowers women. “You are our light. And the way that you make me and my friends feel, the way you make my black friends feel, is empowering. And you make them stand up for themselves. And I love you. I always have and I always will.”

All of the songs on Lemonade, including “Hold Up” and “Formation,” execute Beyoncé’s lyrical intentions and self-awareness of black female invisibility in American culture. Lemonade subverts stereotypical images of black females as undesirable and powerless to hold the interest of a man, society, or the media. In other words, she issues a black female-centric message of aesthetic beauty and sexual empowerment. As for now, twin babies and all, Beyoncé has the world at her feet. We’re all waiting for the next song, for the next message that will make the universe tilt in her favor. After all, a win for Beyoncé is a win for all women. She has a warm-hearted yet powerful way of making women feel they have features worth looking at and substance worth holding on to.