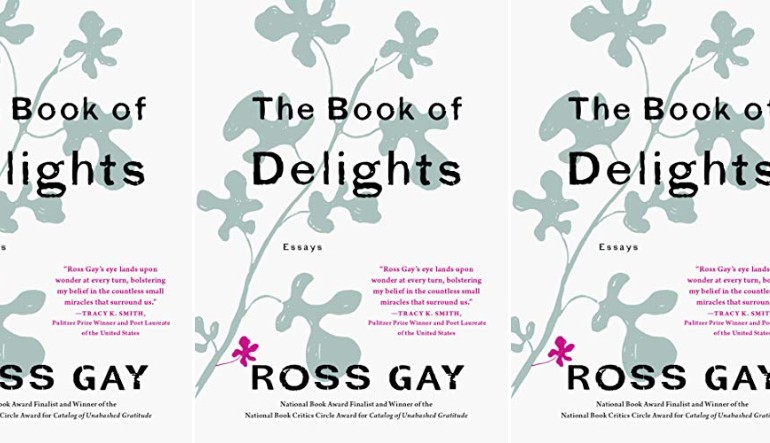 If you are, like me, a sometimes-cynic, you may come to Ross Gay’s The Book of Delights skeptically, worrying, as you do about everything concerning happiness, it will be too saccharine, too hopeful, the kind of book that elides what you, a sometimes-cynic, know about the world. But, even given the book’s project—it tracks a year of small and large delights in Gay’s life, each short entry focused on a different, daily pleasure—and Gay’s reputation for being a cheerful delight himself, The Book of Delights restores pleasure as a site of serious thought and, even more, as a mode in inquiry in itself, while Gay’s wholesome (but never saccharine) voice convinces us that a mode of inquiry, a way of thinking, too, can be a pleasure itself.

Seated, most often, in his garden, Gay’s meandering through his delights becomes a treatise on how to be delighted. In the second mini-essay of the book, titled “Inefficiency,” he tells us that this time in his garden

is somehow an exercise in supreme attentiveness—staring into the oregano blooms wending through the lowest branches of the goumi bush and the big vascular leaves of the rhubarb—and also an exercise in supreme inattention, or distraction, I should say, or fleeting intense attentions—did I mention the hummingbird hovering there with its green-gold breast shimmering, slipping its needle nose in the zinnia, and zoom!

Gay enacts, here and again and again in these essays, the process of absorption that results in pleasure for the looker, feeler, thinker. His thoughts lightly overlay the sensuous reality of existing in the world, which often makes the thinker feel like they have no thoughts at all, are dissolved completely in an environment. At the same time, in reading, the pleasure we get is from the very close view of an interesting mind (so often imitated, badly and to ill effect, on the page, but here genuine) moving from thought to sense to thought again.

Gay returns to this concept of a mind wandering, set free of time constraints, in the section titled “Loitering,” where he reminds us that “loitering, as you know, means fucking off, or doing jack shit, or jacking off, and given that two of those three terms have sexual connotations, it’s no great imaginative leap to know that it is a repressed and repressive… culture, at least, which invented and criminalized the concept.” To loiter is to enjoy “subtly doz[ing] in the later afternoon sun… under the awning” of a café in Detroit, totally submerged in bodily experience, which “also impl[ies] being unproductive. Which leads to being, even if only temporarily, nonconsumptive, and this is a crime in America, and more explicitly criminal depending upon any number of quickly apprehended visual cues.” Who may loiter? Gay asks. Who can afford to be absorbed in a garden? “The darker your skin, the more likely you are to be ‘loitering’” in a criminal way, he answers. Who is allowed to revel in their pleasure publicly, by sitting on a sidewalk or lingering on a porch, as Gay describes doing—and describes being interrupted doing—in various essays here? And to what ends are certain people’s joys silenced or pushed into the private sphere? In “Still Processing,” Gay tells us

that one of the objectives of popular culture, popular media, is to make blackness appear to be inextricable from suffering, and suffering from blackness. Is to conflate blackness and suffering. Suffering and blackness… Which is clever as hell if your goal is obscuring the efforts, the systems, historical and ongoing, to ruin black people. Clever as hell if your goal is to make appear natural what is, in fact, by design.

Pleasure, then, for some, becomes as an act of resistance against a racist status quo, against a world that locates sorrow within blackness, which allows society to ignore the sorrow of black people completely. This idea, which recurs throughout these essays, elevates the idea of delight and the act of cataloging it, to something important, serious, and necessary.

And though this is a book about delight, Gay never lets us ignore his sorrow, annoyance, frustration, mourning, or loss. In fact, this is one of the reasons The Book of Delights is so effectively delightful, surprising, tender, varied, as real joy is. “‘All angels are terrible,’” Gay quotes,

terrible in the old German way…, or maybe more accurately in the Romantic sense, or in the Burkean sublime sense, which speaks to obliteration and annihilation—all angels remind us that annihilation is part of the program. And those terrible angels—the angel of annihilation—is a beautiful thing, is the maker, too, of joy.

These textures come through in Gay’s catalogue so that even the sometimes-cynic can’t object to his project. Here, joy, delight, ecstatics, are complicated, so that even when we are delighted, there is room to acknowledge death, injustice, the ways we’re thwarted and blocked. Delight, Gay seems to assert, contains these too.

Tags:Ross Gay, The Book of Delights